ANN ARBOR — A new molecular gel recipe developed at the University of Michigan is at the core of a prototype for a more accurate lead paint test.

The test makes it easy to see whether a paint chip contains more than the regulated 5,000 parts per million of the poisonous metal that was banned from pigments in 1978. Government agencies use that threshold to define paint as “lead-based” and the Environmental Protection Agency requires that home test kits can differentiate above and below it. Yet these home kits have a wide margin of error and they produce many false positives, the researchers say.

The new test is more clear and accurate than its counterparts. It consists of a vial that holds paint thinner and a sprinkling of certain salts that, when combined with the right concentration of lead, form a gel. 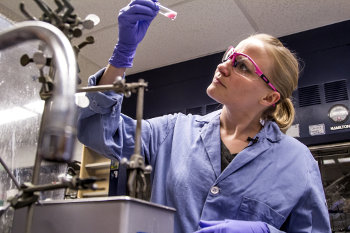 Users drop a paint chip in, heat the mixture and wait to see how the solution reacts. If a gel forms and the gel stays at the top of the inverted vial, it’s positive for at least 5,000 ppm lead. If the solution stays liquid and no gel forms, there may still be some lead in the paint, but not enough to require special steps to maintain it or get rid of it.

“What’s great is that it doesn’t matter what color the paint is and it is so simple: anyone can tell the difference between a liquid and a gel,” said Gesine Veits, a postdoctoral scholar in chemistry and first author of a paper on the work published in the Journal of the American Chemical Society.

The test could help homeowners and renters better understand their level of risk. The researchers say it also pushes forward some exciting science. It demonstrates a more streamlined approach to making targeted molecular gels, Jello-like substances that hold promise for sensing, biomedicine and environmental clean-up applications.

“Other times, researchers might take a gel that’s already been discovered and use it for a different purpose. To make one from scratch is really hard. This paper is about a completely different approach.”

To come up with their recipe, the researchers first assumed that exploring crystal growth could give them insights about gel formation. Crystals are rigid solids and gels are in between solids and liquids.

Next, they turned to the Cambridge Structural Database, a global repository of more than 800,000 crystal structures. Any researcher who reports a new crystal structure is required to enter it in the database.

They searched for crystals that contain lead. Then they narrowed that down further. From looking at gels under a microscope, they knew gels often resemble bowls of spaghetti—tangles of long fibers. Of the possible crystal structures, it occurred to them that a long strand would be most similar to a needle-shaped crystal. So the research team zeroed in on the crystal structures that contain lead—and produced a shaft shape. The researchers then used those molecules as the starting point.

“We were surprised how well it worked,” McNeil said.

Not everyone is convinced that their findings weren’t serendipitous themselves.

“We made the assumption that when a crystal grows and it forms a needle-shape, the forces might be similar to those at work when a gel is forming,” McNeil said. “It seems to have worked, but some people think it was a big assumption.”

McNeil’s research group plans to test the new design process on a gel that doesn’t include a metal, to see if their recipe can serve as a template for others.

The university is pursuing patent protection for the intellectual property and is seeking commercialization partners to help bring the technology to market.