*Research could lead to techniques to improve fertilization in humans*

In new research that could have implications for improving fertilization in humans and other mammals, life scientists studied interactions between individual sperm and eggs in red abalone, an ocean-dwelling snail, and made precise chemical measurements and physical models of these interactions. They are the first scientists to do so.

By simulating the natural habitat of the abalone in the laboratory, the scientists were able to determine the conditions under which sperm–egg encounters and fertilization were most likely to occur.

“If we can understand the basic physics, chemistry and biology of reproduction, then moving from one species to the next is like dotting I’s and crossing T’s,” said the study’s lead author, Richard Zimmer, a UCLA distinguished professor of ecology and evolutionary biology. 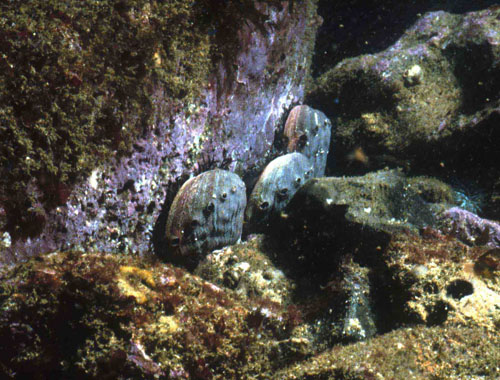 In 2002, Zimmer’s research team identified a molecule called tryptophan that is released by female abalone eggs to attract sperm. Now Zimmer and Jeffrey Riffell, an assistant professor of biology at the University of Washington, report that the released tryptophan creates a plume around the egg, greatly enlarging the target area for sperm, in much the same way using a larger tennis racket increases the chances of hitting the ball. The plume increases the egg size by a factor of five, the researchers said.

In addition, the egg has to release very little tryptophan to increase its target area, Zimmer and Riffell report in the journal Proceedings of the National Academy of Sciences. The research is currently online and will be published in an upcoming print edition of the journal.

“We established that less than 1 percent of an egg’s tryptophan reserves are used by eggs to communicate with sperm,” Zimmer said. “The egg does not want to give up tryptophan. The egg sequesters tryptophan and releases just a whiff — just enough to attract a sperm. It’s an effective, evolved trick to enhance the likelihood of an encounter between sperm and egg. There is essentially no cost to the egg for this very effective communication system.”

An abalone egg also uses tryptophan for constructing an embryonic nervous system and building neurotransmitters, as well as for other purposes, Zimmer said.

But the success of the egg’s plume in attracting sperm, as well as sperm motility and other elements of the fertilization process, are greatly influenced by ocean flow conditions. Therefore, the biologists analyzed the physics of fluid motion in mediating sperm–egg interactions.

“The effect is huge, and was previously unsuspected,” said Zimmer, who is a member of UCLA’s neuroscience program. “The physics of fluid motion has a profound consequence on the ability of sperm to navigate and find an egg, and therefore on fertilization. We have identified the principal mechanisms by which eggs and sperm communicate and interact within an environment that has fluid motion. The method by which sperm in humans search for and find an egg seems to be the same process as in abalone. Similar fluid dynamics operate whether in the turbulent ocean environment or within a mammalian reproductive tract.

“It appears the forces imposed by fluid motion have acted as selective forces in the evolution of the communication system between sperm and egg within abalone. I expect that we will be able to describe the specific environmental conditions within the human reproductive system that will maximize the likelihood of contact between sperm and egg. The physical and chemical environments are actually quite similar.”

Zimmer and Riffell, who was formerly a graduate student in Zimmer’s lab, conducted fieldwork at San Diego’s Point Loma. They employed tiny sensors in a novel way, using Doppler acoustic technology to measure fluctuations of fluid motion in the environment where abalone naturally reproduce.

The biologists also devised an experimental technique by which they could generate the type of water flow and physical forces found in those habitats in a specialized tank. They used a computer and laser-based imaging system to study and quantify individual interactions between single sperm cells and single eggs, at long distances, away from any walls or boundaries. They are the first scientists to conduct such research.

“We now know properties of fluid motion that relate to the forces imposed at a microscopic scale on individual sperm and individual eggs as they interact,” Zimmer said.

As part of the study, Zimmer and Riffell also developed mathematical models that describe the plumes of tryptophan that come off of eggs under a variety of physical conditions.

“We have theoretical models of what the plumes should look like, and images of eggs with sperm swimming around them,” Zimmer said. “We mapped the empirical data on top of the theoretically predicted plumes. The question was whether sperm’s attraction to eggs could be predicted from our theoretical models of the physics of what the plume looks like. The two mapped onto each other beautifully. The interaction could be predicted.”

Because aspects of fluid flow in coastal ocean environments are remarkably similar to those in the human reproductive tract, the research could lead to methods to identify which human donors’ sperm are the “most vigorous,” with the highest probability of fertilizing an egg, Zimmer said. It may also suggest how to add fluid motion to maximize the probability of sperm fusing with an egg.

Scientists have been trying to describe interactions between microorganisms in oceans and chemical plumes for years. Zimmer and Riffell are the first to achieve the chemical measurements and develop the physical models.

Zimmer has received a new three-year federal award from the National Science Foundation for further studies in humans, abalone and sea urchins, working with Riffell and Roman Stocker, an associate professor of in civil and environmental engineering at the Massachusetts Institute of Technology. Stocker is building microscopic devices that will allow the researchers to study a wide variety of chemical and physical environmental conditions.