Recent data from NSF-funded research in both Greenland and Antarctica demonstrate that fossil-fuel related emissions of both methane and ethane, two of the most abundant hydrocarbons in the atmosphere, declined at the end of the twentieth century, according to a paper published Thursday in the journal Nature.

The causes of the decline in methane emission rates to the atmosphere have been puzzling scientists for some time. This new study shows that a change in human activities may have played a key role in the recent leveling off of methane, which, being a potent greenhouse gas contributes to global temperatures.

Murat Aydin from the University of California, Irvine is the lead author of the paper. Other researchers include Kristal Verhulst, Eric Saltzman, Donald Blake, Qi Tang, and Michael Prather from UCI, Mark Battle from Bowdoin College, and Stephen Montzka from the National Oceanic and Atmospheric Administration. 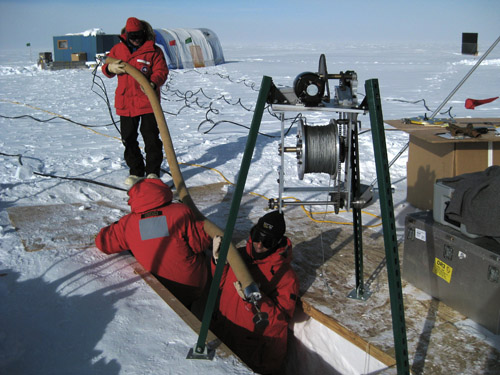 Researchers sample ice to investigate the history of fossil-fuel emissions of methane, based on measurements of another hydrocarbon, ethane, in air trapped in the polar ice sheets in Antarctica. The ancient air resides close to the surface, within the perennial snowpack, and can be used to study changes in the atmosphere that occurred during the twentieth century. Image credit: National Science Foundation

The team investigated the history of fossil-fuel emissions of methane, based on measurements of another hydrocarbon, ethane, in air trapped in the polar ice sheets in Greenland and Antarctica. The ancient air resides close to the surface, within the perennial snowpack, and can be used to study changes in the atmosphere that occurred during the twentieth century.

“Fossil fuels are a common source of both ethane and methane. Methane has many other sources, but we know most of the ethane in the atmosphere today is from fossil fuels. If ethane changes, it is easier to figure out the cause” said Aydin. “After carbon dioxide, methane is the second most important greenhouse gas. This research was conducted to track ethane and to see what it could tell us about methane. We found that ethane emissions declined at the same time as the rise in methane dramatically slowed, suggesting a common cause.” At the end of the 20th century, methane and ethane were deemed valuable energy resources; collected and consumed as natural gas they are converted to carbon dioxide. The researchers’ results for this time frame indicate that the leveling off in atmospheric methane in recent years is likely linked to this change in energy use.

“This research helps explain why atmospheric methane levels stabilized at the end of the twentieth century” said co-author Eric Saltzman. “Methane levels are important for global climate and understanding how human activities affect methane is a key part of predicting how much warming we may expect in the future.”

“We still have more research to conduct, but this discovery is significant to our efforts in determining the link between ethane and methane and what it may tell us about climate change,” said Julie Palais, NSF program director. “We must work together to continue to find ways to further our research on this very important subject.”