To safely use bacteria in agriculture to help fertilize crops, it is vital to understand the difference between harmful and healthy strains. The bacterial genus Burkholderia, for example, includes dangerous disease-causing pathogens — one species has even been listed as a potential bioterrorist agent — but also many species that are safe and important for plant development.

Can the microbial good and evil be told apart? Yes, UCLA life scientists and an international team of researchers report Jan. 8 in the online journal PLOS ONE.

“We have shown that a certain group of Burkholderia, which have just been discovered in the last 12 years as plant-growth promoting bacteria, are not pathogenic,” said the study’s senior author, Ann Hirsch, a professor of molecular, cell, and developmental biology in the UCLA College of Letters and Science. “This opens up the possibility of using these particular species for promoting plant growth through the process of nitrogen fixation, particularly in areas of climate change. This will have a major impact, especially on people in the developing world in producing protein-rich crops.” 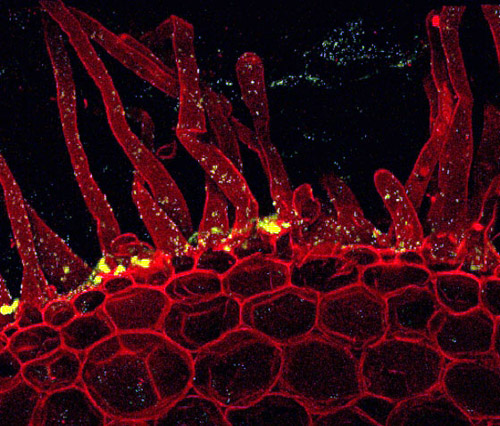 Microscope image of Burkholderia silvatlantica sp. PVA5 (one of the strains analyzed in this study) forming a biofilm on the root of a honey locust plant (Gleditsia triacanthos). The red is the outline of the plant cells and the green is the bacteria. Image credit: Michelle R. Lum

Nitrogen fixation is a process by which helpful bacteria that have entered the roots of plants convert nitrogen in the atmosphere into ammonia, which helps the plants thrive. The findings of Hirsch and her colleagues indicate that several recently discovered Burkholderia species, including Burkholderia tuberum, could be used — cautiously — in nitrogen fixing. These species, the scientists discovered, lack those genes that make other Burkholderia species harmful agents of infection.

“Bacteria that fix atmospheric nitrogen into ammonia, such as Burkholderia,are critical for plant growth,” said Hirsch, whose laboratory studies many aspects of the complex symbiosis between plants and bacteria. “We’re especially interested in these recently described Burkholderia species because they are found primarily in the dry and acidic soils of the Southern Hemisphere, making them potentially important for agriculture in less productive areas.”

For their study, the UCLA life scientists performed a bioinformatics analysis of four symbiotic Burkholderia species, all of which fix nitrogen and one, B. tuberum, which “nodulates legumes.” They found a strong distinction between genes in these beneficial strains and in pathogenic strains. They searched for genes typically involved in infection — for attaching to and invading cells or for secreting toxins. Unlike their dangerous cousins, the four symbiotic Burkholderia species did not have genes associated with the virulence systems found in the pathogenic species.

Burkholderia were first discovered as plant pathogens in 1949 by Walter Burkholder, who identified them as the agent causing onion-skin rot. Later, Burkholderia species were identified as the causative agent of the disease melioidosis, a public health threat, especially in tropical countries like Thailand and in parts of Australia. B. pseudomallei, which causes melioidosis, is classified by the Centers for Disease Control and Prevention as a potential bioterrorist agent.

It wasn’t until many decades after Burkholder’s discovery that closely related Burkholderia species were found to enter plant roots not as pathogens but as helpful symbionts — generating root nodules in which the bacteria provide nitrogen fertilizer to the plant. Bacteria that cause the formation of these nodules in legumes, such as soybeans, alfalfa and peanuts, are crucial to sustainable agricultural systems, Hirsch said.

Although the nodulating, symbiotic species of Burkholderia are related to the more dangerous species, a detailed analysis of their evolutionary relationships published earlier this year by Hirsch and her colleagues showed that the two groups have a distinct evolutionary lineage.

The harmful Burkholderia species are more resistant to antibiotics than the symbiotic and agricultural strains. In addition to the bioinformatics analysis in the current study, the team analyzed resistance to a panel of common antibiotics, and tested the potential of different Burkholderia species to cause infection in laboratory conditions.

Experiments testing the potential of the four symbiotic species to cause infection in the small nematode worm known as Caenorhabditis elegans and in human cells grown in culture verified the bioinformatics analysis, showing that the bacteria were not harmful.

The research in Hirsch’s laboratory is federally funded by the National Science Foundation, by grants from the Shanbrom Family Foundation, a UC Office of the President Presidential Postdoctoral Fellowship, and a L’Oréal USA for Women in Science Fellowship.