Imagine being able to use electricity to power your car — even if it’s not an electric vehicle. Researchers at the UCLA Henry Samueli School of Engineering and Applied Science have for the first time demonstrated a method for converting carbon dioxide into liquid fuel isobutanol using electricity.

In a study published March 30 in the journal Science, James Liao, UCLA’s Ralph M. Parsons Foundation Chair in Chemical Engineering, and his team report a method for storing electrical energy as chemical energy in higher alcohols, which can be used as liquid transportation fuels.

“The current way to store electricity is with lithium ion batteries, in which the density is low, but when you store it in liquid fuel, the density could actually be very high,” Liao said. “In addition, we have the potential to use electricity as transportation fuel without needing to change current infrastructure.” 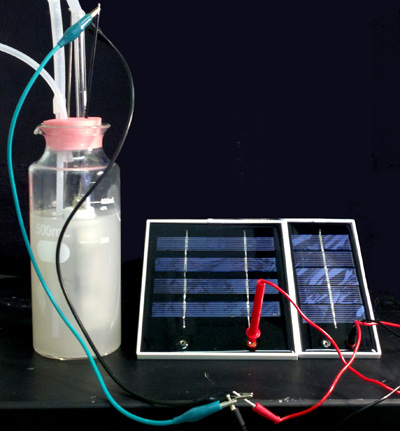 Liao and his team genetically engineered a lithoautotrophic microorganism known as Ralstonia eutropha H16 to produce isobutanol and 3-methyl-1-butanol in an electro-bioreactor using carbon dioxide as the sole carbon source and electricity as the sole energy input.

Photosynthesis is the process of converting light energy to chemical energy and storing it in the bonds of sugar. There are two parts to photosynthesis — a light reaction and a dark reaction. The light reaction converts light energy to chemical energy and must take place in the light. The dark reaction, which converts CO2 to sugar, doesn’t directly need light to occur.

“We’ve been able to separate the light reaction from the dark reaction and instead of using biological photosynthesis, we are using solar panels to convert the sunlight to electrical energy, then to a chemical intermediate, and using that to power carbon dioxide fixation to produce the fuel,” Liao said. “This method could be more efficient than the biological system.”

Liao explained that with biological systems, the plants used require large areas of agricultural land. However, because Liao’s method does not require the light and dark reactions to take place together, solar panels, for example, can be built in the desert or on rooftops.

Theoretically, the hydrogen generated by solar electricity can drive CO2 conversion in lithoautotrophic microorganisms engineered to synthesize high-energy density liquid fuels. But the low solubility, low mass-transfer rate and the safety issues surrounding hydrogen limit the efficiency and scalability of such processes. Instead Liao’s team found formic acid to be a favorable substitute and efficient energy carrier.

“Instead of using hydrogen, we use formic acid as the intermediary,” Liao said. “We use electricity to generate formic acid and then use the formic acid to power the CO2 fixation in bacteria in the dark to produce isobutanol and higher alcohols.”

The electrochemical formate production and the biological CO2 fixation and higher alcohol synthesis now open up the possibility of electricity-driven bioconversion of CO2 to a variety of chemicals. In addition, the transformation of formate into liquid fuel will also play an important role in the biomass refinery process, according to Liao.

“We’ve demonstrated the principle, and now we think we can scale up,” he said. “That’s our next step.”

The study was funded by a grant from the U.S. Department of Energy’s Advanced Research Projects Agency–Energy (ARPA–E).