UA Study: Evolution Too Slow to Keep Up With Climate Change

A study led by a UA ecologist has found that many species evolve too slowly to adapt to the rapid climate change expected in the next 100 years.

Many vertebrate species would have to evolve about 10,000 times faster than they have in the past to adapt to the rapid climate change expected in the next 100 years, a study led by a University of Arizona ecologist has found.

Scientists analyzed how quickly species adapted to different climates in the past, using data from 540 living species from all major groups of terrestrial vertebrates, including amphibians, reptiles, birds and mammals. They then compared their rates of evolution to rates of climate change projected for the end of this century. This is the first study to compare past rates of adaption to future rates of climate change.

The results, published online in the journal Ecology Letters, show that terrestrial vertebrate species appear to evolve too slowly to be able to adapt to the dramatically warmer climate expected by 2100. The researchers suggested that many species may face extinction if they are unable to move or acclimate.

“Every species has a climatic niche which is the set of temperature and precipitation conditions in the area where it lives and where it can survive,” explained John J. Wiens, a professor in UA’s department of ecology and evolutionary biology in the College of Science. “For example, some species are found only in tropical areas, some only in cooler temperate areas, some live high in the mountains, and some live in the deserts.” 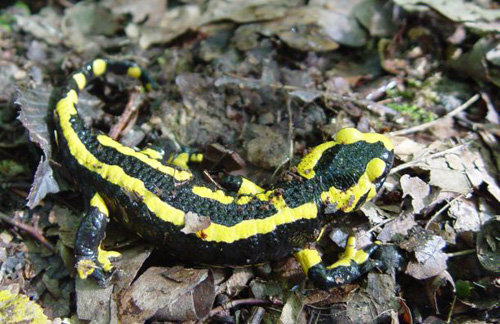 The European Fire Salamander is one of several species of terrestrial vertebrates that could lose many of its populations but may be able to move to adjust its range to a changing climate. (Photo by John J. Wiens)

Wiens conducted the research together with Ignacio Quintero, a postgraduate research assistant at Yale University.

“We found that on average, species usually adapt to different climatic conditions at a rate of only by about 1 degree Celsius per million years,” Wiens explained. “But if global temperatures are going to rise by about 4 degrees over the next hundred years as predicted by the Intergovernmental Panel of Climate Change, that is where you get a huge difference in rates. What that suggests overall is that simply evolving to match these conditions may not be an option for many species.”

For their analysis, Quintero and Wiens studied phylogenies – essentially evolutionary family trees showing how species are related to each other – based on genetic data. These trees reveal how long ago species split from each other. The sampling covered 17 families representing the major living groups of terrestrial vertebrates, including frogs, salamanders, lizards, snakes, crocodilians, birds and mammals.

They then combined these evolutionary trees with data on the climatic niche of each species to estimate how quickly climatic niches evolve among species, using climatic data such as annual mean temperature and annual precipitation as well as high and low extremes. 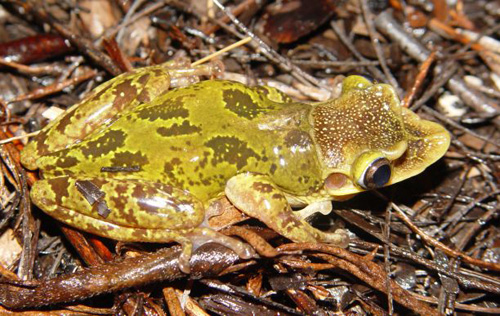 This Mexican tree frog from the Yucatan Peninsula, on the other hand, represents one of many species whose existence is threatened by a warming climate. (Photo by John J. Wiens)

“Basically, we figured out how much species changed in their climatic niche on a given branch, and if we know how old a species is, we can estimate how quickly the climatic niche changes over time,” Wiens explained. “For most sister species, we found that they evolved to live in habitats with an average temperature difference of only about 1 or 2 degrees Celsius over the course of one to a few million years.”

“We then compared the rates of change over time in the past to projections for what climatic conditions are going to be like in 2100 and looked at how different these rates are. If the rates were similar, it would suggest there is a potential for species to evolve quickly enough to be able to survive, but in most cases, we found those rates to be different by about 10,000-fold or more,” he said.

“According to our data, almost all groups have at least some species that are potentially endangered, particularly tropical species.”

Species can respond to climate change by acclimating without evolutionary change or by moving over space to track their preferred climate. For example, some species might be able to move to higher latitudes or higher elevation to remain in suitable conditions as the climate warms. In addition, many species could lose many populations due to climate change but might still be able to persist as a species if some of their populations survive. Barring any these options, extinction is the most likely outcome.

He explained that moving to more suitable climatic conditions may not always be an option for many species.

“Some studies suggest many species won’t be able to move fast enough,” he said. “Also, moving may require unimpeded access to habitats that have not been heavily disturbed by humans. Or consider a species living on the top of a mountain. If it gets too warm or dry up there, they can’t go anywhere.” 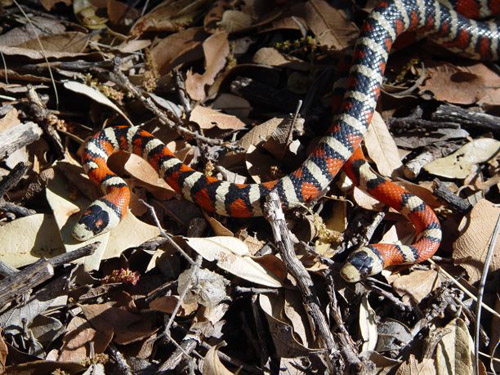 In an earlier study, Wiens and co-authors asked what might actually cause species to go extinct. They showed that species extinctions and declines from climate change are more often due to changes in interactions with other species rather than inability to cope with changing conditions physiologically.

“What seemed to be a big driver in many species declines was reduced food availability,” Wiens said. “For example, bighorn sheep: If it gets drier and drier, the grass gets sparse and they starve to death.”