Prostate cancer is the second-leading cause of cancer death in American men: the American Cancer Society expects the disease will claim nearly 30,000 lives in 2013. The disease mainly affects older men—the median age of diagnosis is 67—and it’s a slow-growing cancer, so most men diagnosed with the disease are likely to die of other causes.

Brad Davis, a veterinarian with a family history of prostate cancer, was diagnosed at age 54. A blood test he had taken showed elevated levels of prostate-specific antigen (PSA), a protein that may indicate the presence of the disease, and a biopsy confirmed the diagnosis.

“This put me in a quandary,” says. Davis, who knew he had many active years still ahead, and was concerned that surgery or radiation could compromise them. Still, he was young enough that the cancer, if left unchecked, could eventually kill him.

Just a few years ago Davis’s options would have been limited to “watchful waiting” (close monitoring by a doctor with treatment postponed until deemed necessary) or prostatectomy to remove part or all of his prostate. But thanks to advances in prostate cancer treatment, his Yale doctors were able to offer a relatively new, middle-of-the-road approach called active surveillance.

When Peter G. Schulam, M.D., Ph.D., came to Yale from the University of California at Los Angeles (UCLA) in 2012 as professor and chair of the School of Medicine’s newly formed Department of Urology, one of his first actions was to assemble the team and equipment necessary to perform active surveillance.

Schulam, who directs Yale Cancer Center’s Prostate and Urologic Cancer Program, had seen good results with active surveillance in California, but the approach is so new that there are not yet any national guidelines for the protocol. 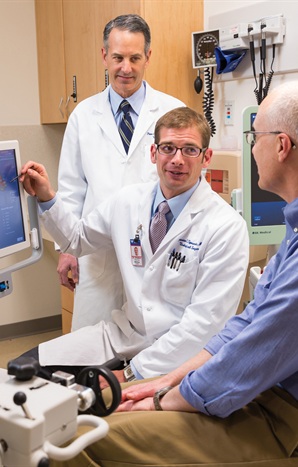 From left) Urologists Peter Schulam and Preston Sprenkle discuss a patient’s case using the Artemis system, which offers new flexibility to men diagnosed with prostate cancer who are not ready to pursue surgical treatment. (Photo by Robert A. Lisak)

At Yale, patients like Davis who have a high psa result or an abnormal digital exam have a baseline biopsy, then a repeat biopsy after six months, and a subsequent biopsy every two or three years—or more frequently if indicated.

One reason biopsies are a preferred diagnostic tool in prostate cancer is that the prostate is “the only solid organ in the body in which we cannot image cancer,” Schulam says. So if a magnetic resonance imaging scan reveals suspicious lesions in the prostate, Yale doctors providing active surveillance perform what is known as a fusion biopsy using the Artemis device, a 3D imaging and navigation system that tracks the disease’s progress with great precision.

“We use Artemis and fusion biopsy to take pictures and overlap them with real-time ultrasound images to help us guide where our needles go,” explains Preston Sprenkle, M.D., assistant professor of urology. This method allows doctors to take future biopsies from the exact same spot in the prostate where previous lesions were found, allowing them to better monitor the most troublesome part of the gland.

So far the evidence in favor of systems like Artemis is promising. A study published in January by UCLA researchers in the Journal of Urology found that targeted biopsies were three times likelier than conventional biopsies to detect cancer, and there is hope that tools like Artemis may enable doctors to treat prostate cancer more efficiently.

“We overtreat prostate cancer in the United States,” says Schulam. Most cases are not life-threatening, but a vast majority of men with prostate cancer diagnoses undergo aggressive treatments—there are between 100,000 and 120,000 radical prostatectomy surgeries per year in the U.S. In 2012, the U.S. Preventive Services Task Force recommended against PSA-based screening for prostate cancer, reasoning that too many patients were being treated for asymptomatic disease. The recommendation “charges us as urologists to better differentiate those who need treatment from those who don’t,” Schulam says.

The patients referred to Yale who benefit most from active surveillance are at a low risk of developing symptoms. Normally, Sprenkle says, he would recommend radiation or surgery in patients who, like Davis, are in their 50s.

“The chance their cancer is going to progress over the next 30 to 40 years is very high,” says Schulam, adding that men in their 60s are more likely to find that active surveillance is an attractive treatment option.

Doctors also assign a Gleason score to prostate cancers, a measure of the likelihood a cancer will spread based on its appearance under a microscope. Men with a Gleason score of 6 or below and with cancer in only a few biopsy samples are also good candidates for active surveillance, Sprenkle says. Davis says that his Gleason score of 6, in only 20 percent of one core biopsy—confirmed in a secondary biopsy with Artemis—contributed to his decision.

Davis, now 55, was the first patient in Yale’s active surveillance program, and he is happy to have had the choice available to him.

When interviewed for this article, Davis was symptom-free, his PSA level was at 3 and not a cause for concern, and he had “some benign hyperplasia”—prostate enlargement—“that’s not real significant,” he said. “The reality is many men diagnosed in their 60s may have lesions for years like mine before detection.”