At issue is how numerous small, glassy spherules had become embedded within specimens of the largest class of meteorites—the chondrites. British mineralogist Henry Sorby first described these spherules, called chondrules, in 1877. Sorby suggested that they might be “droplets of fiery rain” which somehow condensed out of the cloud of gas and dust that formed the solar system 4.5 billion years ago.

Researchers have continued to regard chondrules as liquid droplets that had been floating in space before becoming quickly cooled, but how did the liquid form? “There’s a lot of data that have been puzzling to people,” Grossman said.

Grossman’s research reconstructs the sequence of minerals that condensed from the solar nebula, the primordial gas cloud that eventually formed the sun and planets. He has concluded that a condensation process cannot account for chondrules. His favorite theory involves collisions between planetesimals, bodies that gravitationally coalesced early in the history of the solar system. “That’s what my colleagues found so shocking, because they had considered the idea so ‘kooky,’” he said.

Cosmochemists know for sure that many types of chondrules, and probably all of them, had solid precursors. “The idea is that chondrules formed by melting these pre-existing solids,” Grossman said. 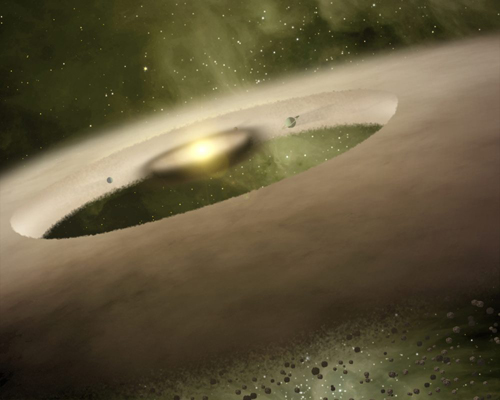 This is an artist’s rendition of a sun-like star as it might have looked at one million years of age. As a cosmochemist, the University of Chicago’s Lawrence Grossman reconstructs the sequence of minerals that condensed from the solar nebula, the primordial gas cloud that eventually formed the sun and planets. Illustration by NASA/JPL-Caltech/T. Pyle, SSC

One problem concerns the processes needed to obtain the high, post-condensation temperatures necessary to heat the previously condensed solid silicates into chondrule droplets. Various astonishing but unsubstantiated origin theories have emerged. Maybe collisions between dust particles in the evolving solar system heated and melted the grains into droplets. Or maybe they formed in strikes of cosmic lightning bolts, or condensed in the atmosphere of a newly forming Jupiter.

At the temperature at which iron becomes oxidized in the solar nebula, though, it diffuses too slowly into the previously formed magnesium silicates, such as olivine, to give the iron concentrations seen in the olivine of chondrules. What process, then, could have produced chondrules that formed by melting pre-existing solids and contain iron oxide-bearing olivine? 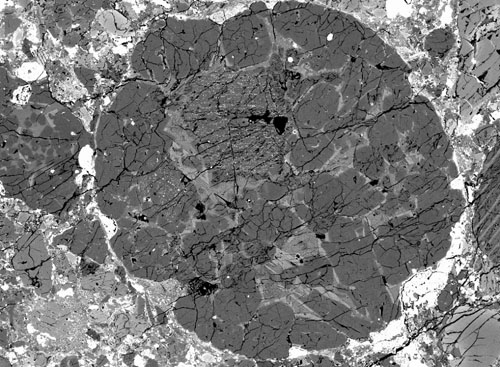 Chondrules are visible as round objects in this image of a polished thin section made from the Bishunpur meteorite from India. The dark grains are iron-poor olivine crystals. This is a backscattered electron image taken with a scanning electron microscope. Photo by Steven Simon

Grossman and Fedkin worked out the mineralogical calculations, following up earlier work done in collaboration with Fred Ciesla, associate professor in geophysical sciences, and Steven Simon, senior scientist in geophysical sciences. To verify the physics, Grossman is collaborating with Jay Melosh, University Distinguished Professor of Earth & Atmospheric Sciences at Purdue University, who will run additional computer simulations to see if he can recreate chondrule-forming conditions in the aftermath of planetesimal collisions.

Grossman and Melosh are well-versed in the longstanding objections to an impact origin for chondrules. “I’ve used many of those arguments myself,” Melosh said.

Grossman re-evaluated the theory after Conel Alexander at the Carnegie Institution of Washington and three of his colleagues supplied a missing piece of the puzzle. They discovered a tiny pinch of sodium—a component of ordinary table salt—in the cores of the olivine crystals embedded within the chondrules.

When olivine crystallizes from a liquid of chondrule composition at temperatures of approximately 2,000 degrees Kelvin (3,140 degrees Fahrenheit), most sodium remains in the liquid if it doesn’t evaporate entirely. But despite the extreme volatility of sodium, enough of it stayed in the liquid to be recorded in the olivine, a consequence of the evaporation suppression exerted by either high pressure or high dust concentration. According to Alexander and his colleagues, no more than 10 percent of the sodium ever evaporated from the solidifying chondrules.

Grossman and his colleagues have calculated the conditions required to prevent any greater degree of evaporation. They plotted their calculation in terms of total pressure and dust enrichment in the solar nebula of gas and dust from which some components of the chondrites formed. “You can’t do it in the solar nebula,” Grossman explained. That’s what led him to planetesimal impacts. “That’s where you get high dust enrichments. That’s where you can generate high pressures.”

When the temperature of the solar nebula reached 1,800 degrees Kelvin (2,780 degrees Fahrenheit), it was too hot for any solid material to condense. By the time the cloud had cooled to 400 degrees Kelvin (260 degrees Fahrenheit), however, most of it had condensed into solid particles. Grossman has devoted most of his career to identifying the small percentage of substances that materialized during the first 200 degrees of cooling: oxides of calcium, aluminum and titanium, along with the silicates. His calculations predict condensation of the same minerals that are found in meteorites.

Over the last decade, Grossman and his colleagues have written a slew of papers exploring various scenarios for stabilizing iron oxide enough that it would enter the silicates as they condensed at high temperatures, none of which proved feasible as an explanation for chondrules. “We’ve done everything that you can do,” Grossman said.

This included adding hundreds or even thousands of times the concentrations of water and dust that they had any reason to believe ever existed in the early solar system. “This is cheating,” Grossman admitted. It didn’t work anyway.

Instead, they added extra water and dust to the system and increased its pressure to test a new idea that shock waves might form chondrules. If shock waves of some unknown source had passed through the solar nebula, they would have rapidly compressed and heated any solids in their path, forming chondrules after the melted particles cooled off. Ciesla’s simulations showed that a shock wave can produce silicate liquid droplets if he increased the pressure and the quantities of dust and water by these abnormally if not impossibly high amounts, but the droplets would be different from the chondrules actually found in meteorites today.

They differ in that actual chondrules contain no isotopic anomalies, whereas the simulated shock-wave chondrules do. Isotopes are atoms of the same element that have different masses from one another. The evaporation of atoms of a given element from droplets drifting through the solar nebula causes the production of isotopic anomalies, which are deviations from the normal relative proportions of the element’s isotopes. It’s a cosmic shoving match between dense gas and hot liquid. If the number of a given type of atoms pushed out of the hot droplets equals the number of atoms getting pushed in from the surrounding gas, no evaporation will result. This prevents isotope anomalies from forming.

The olivine found in chondrules presents a problem. If a shock wave formed the chondrules, then the olivine’s isotopic composition would be concentrically zoned, like tree rings. As the droplet cools, olivine crystallizes with whatever isotopic composition existed in the liquid, starting at the center, then moving out in concentric rings. But no one has yet found isotopically zoned olivine crystals in chondrules.

Realistic-looking chondrules would result only if evaporation were suppressed enough to eliminate the isotope anomalies. That, however, would require higher pressure and dust concentrations that go beyond the range of Ciesla’s shock-wave simulations.

Providing some help was the discovery a few years ago that chondrules are one or two million years younger than calcium-aluminum-rich inclusions in meteorites. These inclusions are exactly the condensates that cosmochemical calculations dictate would condense in the solar nebular cloud. That age difference provides enough time after condensation for planetesimals to form and start colliding before chondrules form, which then became part of Fedkin and Grossman’s radical scenario.

They now say that planetesimals consisting of metallic nickel-iron, magnesium silicates and water ice condensed from the solar nebula, well ahead of chondrule formation. Decaying radioactive elements inside the planetesimals provided enough heat to melt the ice.

The water percolated through the planetesimals, interacted with the metal and oxidized the iron. With further heating, either before or during planetesimal collisions, the magnesium silicates re-formed, incorporating iron oxide in the process. When the planetesimals then collided with each other, generating the abnormally high pressures, liquid droplets containing iron oxide sprayed out.

“That’s where your first iron oxide comes from, not from what I’ve been studying my whole career,” Grossman said. He and his associates have now reconstructed the recipe for producing chondrules. They come in two “flavors,” depending on the pressures and dust compositions arising from the collision.

“I can retire now,” he quipped.