The University of Arizona class is called “Mushrooms, Molds and Man.” Intrigued, undergraduate Lauren Jackson decided to learn about “Kingdom Fungi” and its impact on the world.

He was hooked in a heartbeat. Barely into the course, “I just raised my hand and asked about research opportunities.” That week he started working in the lab with UA mycologist Barry Pryor.

“Fungi are the great decomposers of the Earth. Without them, fallen trees would be stacked up in the forest. Without them, we would not have this regeneration of soil,” Jackson said. 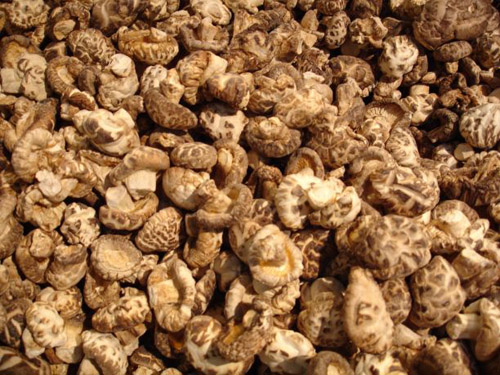 Researchers started growing pink oyster mushrooms and expanded to blue oyster, king oyster and lion’s mane. They haven’t ventured into shitake yet (pictured), but they plan to. Image credit: University of Arizona

The UA’s novel mushroom-based recycling program is “working with nature rather than against it,” testing how well the mushrooms break down various materials.

The next step is to grow the mushrooms on a larger scale, outside the plant sciences lab. At that point, the gourmet mushrooms could turn into an Earth-friendly cash crop.

Pryor and Jackson recently built a mushroom shed at Tucson Village Farms, a project of the UA Cooperative Extension located at the Campus Agricultural Center. They started with growing oyster mushrooms on straw “because they’re one of the simplest to grow, not as sensitive to variable environmental conditions as some,” said Pryor, an associate professor of plant sciences in the UA College of Agriculture and Life Sciences. 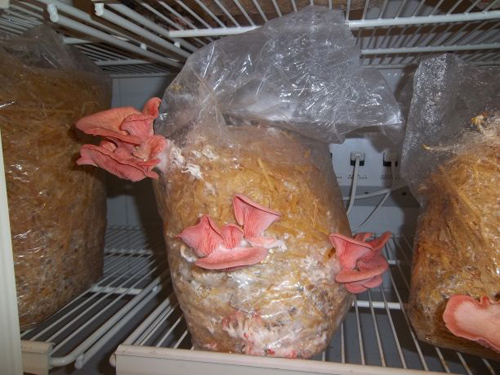 Petal-like pink oyster mushrooms can be grown with a simple straw substrate. (Photo by Barry Pryor)

As a commodity, gourmet mushrooms are in high demand. People pay top dollar for this tasty delicacy, which is relatively easy to cultivate. Their research shows “mushrooms are incredibly versatile in the kinds of substrate they can grow on,” according to Pryor. Depending on the species, a fresh crop of mushrooms can mature in six to eight weeks.

“We’re very optimistic. We know how to grow mushrooms. We started with pink oyster mushrooms and expanded to blue oyster, king oyster, and lion’s mane. We’ve not ventured into shitake yet – but we will.”

The mushroom team also includes research assistant Parker Evans. The group is working with the UA Controlled Environment Agriculture Center to investigate how to scale up production to be commercially viable.

They recently received a grant from the UA Green Fund, which supports projects that make the campus more environmentally sustainable, and they are working with the UA Compost Cats, which collects coffee grounds from campus locations and Starbucks.

Pryor said using mushrooms for recycling is relatively new. A start-up company in Berkeley, Calif., started growing mushrooms on coffee grounds a few years ago and has been quite successful. But the potential is almost unlimited. Think about almond hulls, corn stalks and cobs, tree trimmings that now go to the landfill, mesquite pods fallen to the ground – plus cardboard, paper cups, pizza boxes and other consumer and agricultural waste. 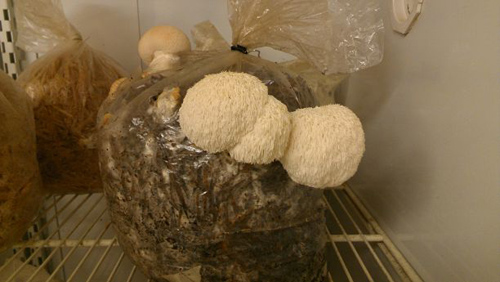 Woodchips and shredded mesquite pods are used as a substrate for a mushroom called lion’s mane. (Photo by Barry Pryor)

Most gourmet mushrooms are grown commercially on hardwood chips or sawdust; oak seems to be the best, Pryor said. Initially their research was focused on using the mushroom as a recycling agent. They did not expect such success growing high-quality gourmet species on common consumer waste. “I eat the ones that we grow on campus and they are delicious.”

“We’re being good stewards, growing food on waste,” Jackson added. “We’re producing a high-demand nutritious product and recycling an array of waste products that are converted into compost and returned to the Earth. It’s such a win-win natural cycle.”

“We maintain a culture library of 13 to 14 gourmet mushrooms. Some are more cold-weather species so we have to be careful what we choose to grow in different seasons,” he said.

The team is passionate about its product. “Mushrooms are high in protein, high in fiber, low in fat and low in sodium,” Jackson said. Mushrooms also are associated with health benefits ranging from reducing cholesterol and hypertension to increasing longevity. Medical researchers are exploring the potential of certain mushrooms species for treating tumors, cancer and dementia.

Yet mushrooms are also among the most perishable products in the supermarket, Pryor said.

“There’s a big difference in quality from day one post-harvest to five or six days post-harvest. So if your mushrooms are produced locally, you will see much fresher, higher quality, more appealing product.” 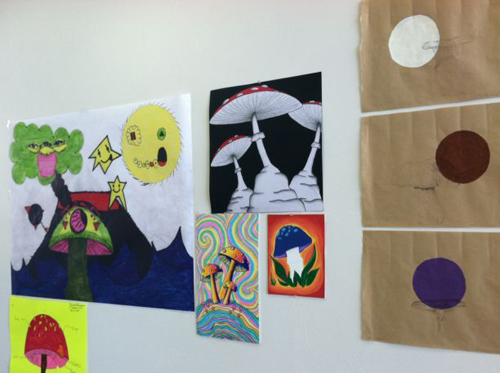 Barry Pryor’s “Mushroom, Molds and Man” class ends each semester with Fungapalooza! – when students are challenged to celebrate the fungi kingdom with art. (Photo courtesy of College of Agriculture and Life Sciences)

There is only one commercial mushroom grower in Arizona, offering a single species. Local chefs are already interested in the UA’s gourmet mushrooms.

Growing mushrooms does require finesse. Most gourmet mushrooms – including shitakes, maitakes and oysters – must be grown in a sterile substrate in the absence of other fungi or bacteria.

“We initially grow our fungi in petri dishes. Then we scale up little by little – from a petri dish to a pint Mason jar of grain to the straw/consumer waste substrate,” Pryor said. “We’ll colonize the petri dish until we have growth across the entire surface. We use that to inoculate jars of grain. The fungus grows readily on this grain. Then we add the colonized grain – called spawn – to the final production substrate. One of the most important steps in producing mushrooms is a pure uncontaminated spawn.”

Other important factors are the right humidity and fresh air. Mushrooms, like people, take in oxygen and give off carbon dioxide. Too much CO2 and the fungi won’t fruit and produce the mushroom.

“We know these ideas work. We have a lot of confidence in our vision,” Pryor said.

“What we found about the mushroom project and our academic course is that people are inherently very curious about fungi. With the opportunity to learn more, they get excited. Then when we create wonderful dishes that include mushrooms there’s a transformation of interest from perhaps fear, to curiosity, to passion. And then they are hooked.”