Researchers at the UA are studying resistance in pink bollworm in China and working to develop strategies against it.

University of Arizona entomologists are joining forces with scientists on the other side of the globe to protect cotton in China from potentially devastating insect pests.

Xianchun Li, associate professor of entomology in the UA College of Agriculture and Life Sciences, and Bruce Tabashnik, head of the department of entomology, both members of the UA BIO5 Institute, are partnering with Chinese scientists to combat insect resistance to genetically engineered cotton plants.

Li, Tabashnik and Kongming Wu, a top researcher with the Institute of Plant Protection at the Chinese Academy of Agricultural Sciences in Beijing, have obtained a grant from China’s National Science Foundation of 2.95 million Chinese yuan – equivalent to $475,000 U.S. dollars – to study resistance in pink bollworm in China and to develop strategies against it.

Farmers have struggled for longer than a century to keep two insect pests – cotton bollworm and pink bollworm – from destroying their cotton crops. In Arizona, where cotton has long been a key industry, growers once battled the pink bollworm and its insatiable appetite for cotton by spraying insecticides. But such sprays are bad for the planet and become powerless when the pests evolve resistance. 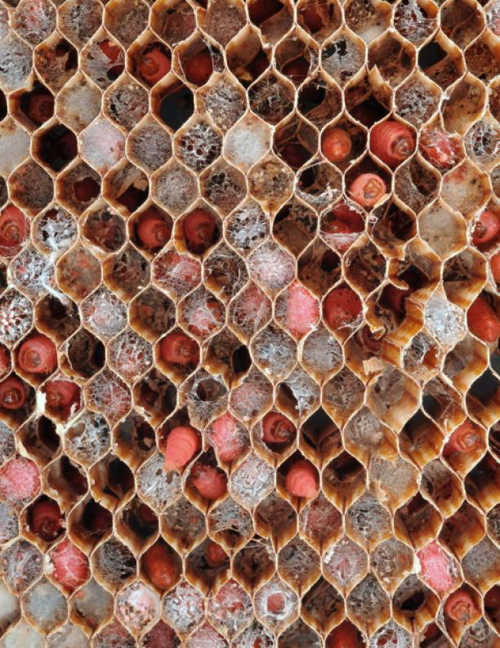 As part of a multi-pronged strategy to suppress pink bollworm in Arizona, caterpillars of this moth are reared in the lab by the millions, then the moths are sterilized and released over cotton fields by airplanes to mate with wild moths. (Photo by Alex Yelich)

A significant new weapon in the battle against bollworms arrived in 1996. Growers in the U.S. began planting genetically engineered cotton that produces an insecticidal protein derived from the widespread bacterium called Bacillus thuringiensis – or Bt.

The Bt toxin made by genetically engineered cotton is safe for humans and other non-target organisms but deadly to the caterpillars of pink bollworm and cotton bollworm.

The key to sustaining the success of Bt cotton is delaying evolution of resistance to the Bt toxin in pests. Researchers from the UA College of Agriculture and Life Sciences have played a critical role in developing strategies to achieve this goal. That effort has succeeded brilliantly according to Tabashnik, with cotton farms in Arizona serving as a model for thwarting pest resistance.

“Arizona is the poster child for successful resistance management for a Bt crop,” Tabashnik said. “Pink bollworm is rare now in Arizona. We have very strong evidence that there is no resistance in the field.” 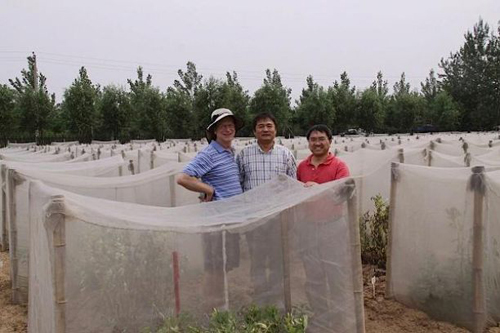 The College of Agriculture and Life Sciences has collaborated with growers, biotechnology companies, the U.S. Department of Agriculture and the U.S. Environmental Protection Agency to manage resistance and eliminate insecticide sprays against pink bollworm in Arizona.

China, the top cotton-producing country in the world at 16 billon pounds per year, first introduced Bt cotton in 1997. For the first decade, Bt cotton was highly effective against both cotton bollworm and pink bollworm in China.

Recently, however, early signs of resistance to Bt cotton have been detected in caterpillars collected from the field, and growers may have to increase the use of insecticide if resistance evolves further.

“We are seeing warning signs,” said Li, a native of China who came to the UA in 2004. “We want to transfer the successful technology that we have here to China to help them prevent further development of resistance.”

Said Tabashnik, “What I would love to see is China able to sustain control of these major pests with Bt cotton so it can reduce its use of insecticide.” 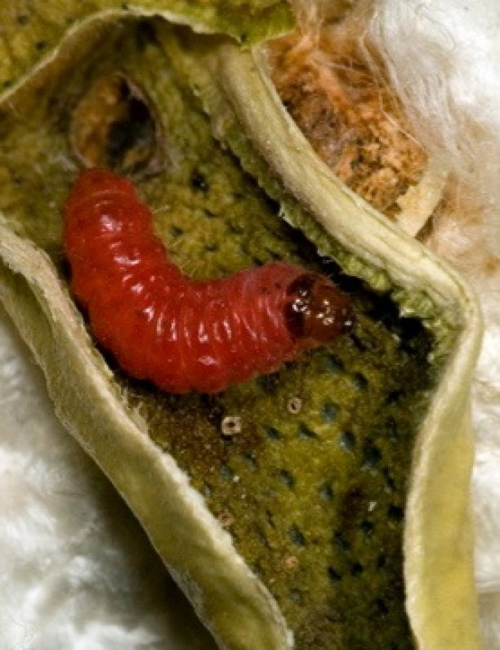 A pink bollworm caterpillar has eaten its way through a boll of cotton. (Photo by Alex Yelich)

Through the five-year grant, Chinese scientists are collecting samples of pink bollworm larvae in the field. Back at the lab, resistance is being studied at the DNA level.

“We will track changes in the frequency of resistance genes in the field and use computer simulations to help determine the best strategies for delaying resistance,” Tabashnik said.

It is likely that strategies that have worked well in Arizona will benefit Chinese growers.

From 1996 to 2005, Arizona cotton growers – with guidance from UA researchers – used the refuge strategy. Refuges consist of standard cotton plants that do not make a Bt toxin, enabling survival of insects that are susceptible to the toxin. Refuges are planted near Bt crops with the goal of producing enough susceptible insects to make it unlikely two resistant insects will mate with each other.

Because Bt cotton kills nearly all pink bollworm caterpillars, the rare resistant moths are most likely to mate with the abundant sterile moths – an evolutionary dead end.

Although the sterile insect release technique is not new, this is the first time it’s been used jointly with a Bt crop. This multi-faceted strategy continues today.

No strategies to combat resistance were implemented in China.

“The refuge strategy should work in China,” Tabashnik said.

Another option: Arizona now uses Bt cotton engineered to make two distinct toxins, so that pests arising with resistance to one toxin are killed by the other toxin. China continues to use Bt cotton with only one toxin. Switching to two-toxin Bt cotton could help to stall resistance in China.

Bt cotton is still working in China and the researchers hope to halt the incipient pest resistance before it gets worse.

“It’s not causing the growers big headaches yet, but if the same trend continues, it could become a very big problem,” Tabashnik said.

Said Li, “If this is not addressed, something that happened in the 1990s in China could happen again. So much pesticide was used, but the pests became resistant. You could actually throw a caterpillar into the pesticide and they would swim around. It wouldn’t kill them.”

He recalls farmers in China sending children out to the fields to handpick caterpillars from cotton plants.

“Farmers couldn’t grow cotton and it really hurt the economy,” Li said. “We hope to catch this in the early stages.”

– By College of Agriculture and Life Sciences