At the office, at home, at school, or on the go, customers tell us their lives never stop moving. So we’ve listened and responded with Microsoft Office 2010, which delivers simple and timesaving tools that help you keep up with your busy schedule, no matter where you are.

With Office 2010, you can express ideas, solve problems, connect with others and create amazing work in ways that will surprise you.

Based on what we’ve heard from millions of Office 2010 beta users, here are some of the best new features Office 2010 has to offer:

2) Linked Notes in OneNote. OneNote is the digital notebook program that many Office users just can’t live without. Some call it the “hidden gem” within Office, because it changes the way people work by capturing text, video, audio and other content types in one single location. OneNote 2010 gets even better, with Linked note-taking – which lets you “dock” OneNote to the side of your computer screen, take notes on a presentation, and map those notes in the presentation you’ve just seen. Whether you’re at school, remodeling a home or simply capturing notes from a client call, OneNote is a great application with unlimited potential to help you get things done.

About the video: Customers of the beta version tell how Microsoft Office 2010 helped them “make it great.”

3) Sparklines in Excel. Excel fans love the application not for the data organization, but for what the data tells them. Charts can be great for telling a story, but the newest feature in Excel – Sparklines – can make your numbers and figures even more exciting. Sparklines are charts that fit into a single cell to show a trend at-a-glance. Eighty-three percent of Office 2010 beta users agree Sparklines make it easier to visualize and gain insight from data.

4) Photo editing in Word. Did you know one in three people include pictures in their Word documents? Office 2010 now has built-in photo editing features, which make it easier than ever to import snapshots from the Web, edit them, and add visual effects in your document. 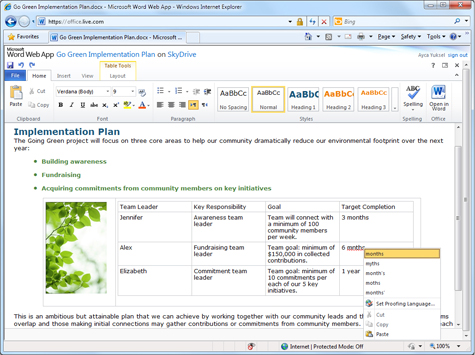 About the image above: With Office 2010, you can edit a Word document, change a PowerPoint slide, adjust data in Excel, and more, using Web Apps in Windows Live. Image credit: Microsoft

5) Video and broadcast capabilities in PowerPoint. People are using multimedia more than ever to communicate ideas. PowerPoint 2010 gives video a first-class seat, with the option to embed video directly in presentations and add stylistic effects. PowerPoint also has a great new broadcast feature, where you can present a slideshow with dynamic transitions and animations to an audience of one or 100, clear across the other side of the world – even if your audience doesn’t have PowerPoint.

6) Office Web Apps. Office Web Apps help you work on your documents from virtually anywhere, using Windows Live SkyDrive. Get things done when you’re away from your “workspace” by creating documents in Office 2010, saving them to SkyDrive, and then viewing and editing with Web Apps anywhere you have Internet access. Web Apps make it easy to collaborate with friends, colleagues and family.

7) A Ribbon you can personalize. The improved Ribbon in Office 2010 not only appears in all of the apps, but lets you access your favorite commands quickly, and customize or create tabs to match your individual work style.