Adam Block of the UA’s Mount Lemmon SkyCenter brings us a rare view of the clouds wafting through our Milky Way in this Astronomy Picture of the Day.

In silhouette against the Milky Way’s faint starlight, its dusty molecular clouds likely contain raw material to form hundreds of thousands of stars, prompting astronomers to eagerly search the clouds for telltale signs of star birth.

This telescopic close-up looks toward the region at a fragmented Aquila dark cloud complex identified as LDN 673, stretching across a field of view slightly wider than the full moon.

For this image selected by NASA as the June 29 Astronomy Picture of the Day, astrophotographer Adam Block of the University of Arizona’s Mount Lemmon SkyCenter remotely operated the 32-inch Schulmann Telescope to peer into the vast chasms of gas and dust wafting through the Milky Way, exposing for about 15 minutes at a time during several nights in April and May.

To image these large objects adequately, he doubled the field of view by combining two frames, painstakingly stitching together almost 50 single images. 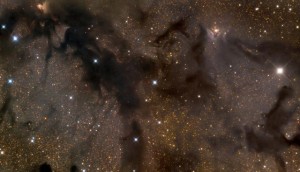 Part of a dark expanse that splits the crowded plane of our Milky Way galaxy, the Aquila Rift arcs through the northern hemisphere's summer skies near bright star Altair and the Summer Triangle. In this scene, visible indications of energetic outflows associated with young stars include the small red tinted nebulosity RNO 109 at top left and Herbig-Haro object HH32 above and right of center. The dark clouds in Aquila are estimated to be some 600 light-years away. At that distance, this field of view spans about 7 light-years. (Photo: Adam Block/UA Mount Lemmon SkyCenter)

“These clouds, part of the so-called dust lanes of our Milky Way, are huge objects that fill the sky along the plane of our galaxy,” Block said. “They are not the most dense clouds in our Milky Way and don’t appear to be forming many stars. In fact, our very own sun may have formed from clouds like these.”

Block said it is possible that gas and dust clouds like these are shaped by stellar winds or radiation sweeping into space from nearby stars.

“These are not stationary objects,” he said. “The clouds move around just like clouds in the sky, but of course they change invisibly to us over timespans of thousands of years.”

Block added the image is a reminder that our galaxy is anything but empty space, dotted with stars.

“When we peer into space across the Milky Way, there are many clouds in the line of sight, especially in visible light. This is why astronomers have to make measurements to take into account the clouds in the foreground obscuring objects further beyond. Observing in other wavelengths, such as infrared or radio waves, allows us to see through the clouds.”