At nearly four feet tall, the Emperor penguin is Antarctica’s largest sea bird—and thanks to films like “March of the Penguins” and “Happy Feet,” it’s also one of the continent’s most iconic. If global temperatures continue to rise, however, the Emperor penguins in Terre Adélie, in East Antarctica may eventually disappear, according to a new study by led by researchers from the Woods Hole Oceanographic Institution (WHOI). The study was published in the June 20th edition of the journal Global Change Biology.

“Over the last century, we have already observed the disappearance of the Dion Islets penguin colony, close to the West Antarctic Peninsula,” says Stephanie Jenouvrier, WHOI biologist and lead author of the new study. “In 1948 and the 1970s, scientists recorded more than 150 breeding pairs there. By 1999, the population was down to just 20 pairs, and in 2009, it had vanished entirely.” Like in Terre Adélie, Jenouvrier thinks the decline of those penguins might be connected to a simultaneous decline in Antarctic sea ice due to warming temperatures in the region. 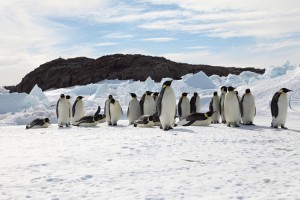 A group of Emperor penguin adults make their way across sea ice in Terre Adélie in East Antarctica. In December, the adults return to the colony to provide food for the chicks. They can be observed walking in groups to the nearest open water areas where they feed. Disappearing sea ice may also affect the penguins’ food source. The birds feed primarily on fish, squid, and krill, a shrimp like animal, which in turn feeds on zooplankton and phytoplankton, tiny organisms that grow on the underside of the ice. Image credit: Stephanie Jenouvrier, Woods Hole Oceanographic Institution

Unlike other sea birds, Emperor penguins breed and raise their young almost exclusively on sea ice. If that ice breaks up and disappears early in the breeding season, massive breeding failure may occur, says Jenouvrier. “As it is, there’s a huge mortality rate just at the breeding stages, because only 50 percent of chicks survive to the end of the breeding season, and then only half of those fledglings survive until the next year,” she says.

Disappearing sea ice may also affect the penguins’ food source. The birds feed primarily on fish, squid, and krill, a shrimplike animal, which in turn feeds on zooplankton and phytoplankton, tiny organisms that grow on the underside of the ice. If the ice goes, Jenouvrier says, so too will the plankton, causing a ripple effect through the food web that may starve the various species that penguins rely on as prey.

To project how penguin populations may fare in the future, Jenouvrier’s team used data from several different sources, including climate models, sea ice forecasts, and a demographic model that Jenouvrier created of the Emperor penguin population at Terre Adélie, a coastal region of Antarctica where French scientists have conducted penguin observations for more than 50 years.

Combining this type of long-term population data with information on climate was key to the study, says Hal Caswell, a WHOI senior mathematical biologist and collaborator on the paper.

“If you want to study the effects of climate on a particular species, there are three pieces that you have to put together,” he says. “The first is a description of the entire life cycle of the organism, and how individuals move through that life cycle. The second piece is how the cycle is affected by climate variables. And the crucial third piece is a prediction of what those variables may look like in the future, which involves collaboration with climate scientists.” 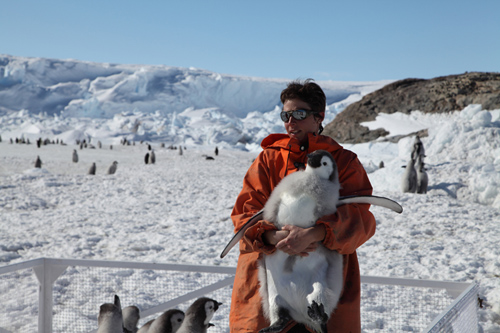 WHOI biologist Stephanie Jenouvrier readies an Emperor penguin chick (about five months old) for tagging during fieldwork in December 2011 in Terre Adélie. The research team utilized Passive Inductive Transponder (PIT) Tag technology, which helps identify the birds and track demographic data, such as whether they return to the colony to breed and raise chicks. Image courtesy of Stephanie Jenouvrier, Woods Hole Oceanographic Institution

Marika Holland of the National Center for Atmospheric Research is one such scientist. She specializes in studying the relationship between sea ice and global climate, and helped the team identify climate models for use in the study.

Working with Julienne Stroeve, another sea ice specialist from the National Snow and Ice Data Center, Holland ultimately recommended five distinct models. “We picked the models based on how well they calculated the sea ice cover for the 20th century,” she says. “If a model predicted an outcome that matched what was actually observed, we felt it was likely that its projections of sea ice change in the future could be trusted.”

Jenouvrier used the output from these various climate models to determine how changes in temperature and sea ice might affect the Emperor penguin population at Terre Adélie. She found that if greenhouse gas emissions continue to rise at levels similar to today—causing temperatures to rise and Antarctic sea ice to shrink—penguin population numbers will diminish slowly until about 2040, after which they would decline at a much steeper rate as sea ice coverage drops below a usable threshold.

The effect of rising temperature in the Antarctic isn’t just a penguin problem, according to Caswell. As sea ice coverage continues to shrink, the resulting changes in the Antarctic marine environment will affect other species, and may affect humans as well.

“We rely on the functioning of those ecosystems. We eat fish that come from the Antarctic. We rely on nutrient cycles that involve species in the oceans all over the world,” he says. “Understanding the effects of climate change on predators at the top of marine food chains—like Emperor penguins—is in our best interest, because it helps us understand ecosystems that provide important services to us.”

Also collaborating on the study were Christophe Barbraud and Henri Weimerskirch of the Centre d’Etudes Biologiques de Chizé, in France, and Mark Serreze of the National Snow and Ice Data Center in the United States. 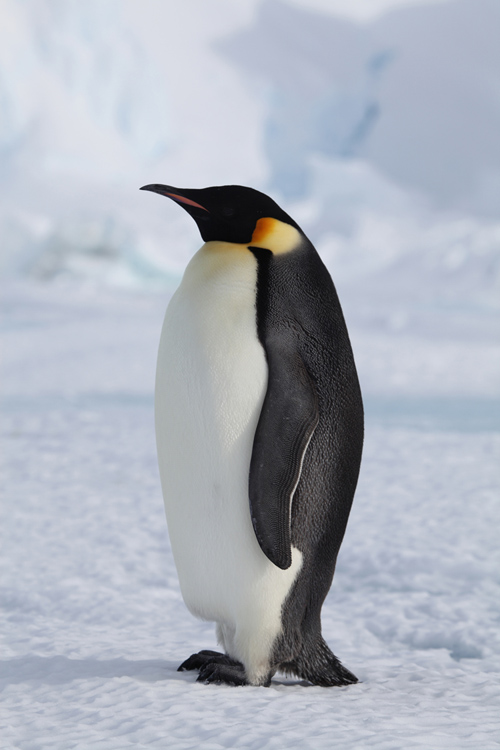