While the worst drought since the Dust Bowl of the 1930s grips Oklahoma and Texas, scientists are warning that what we consider severe drought conditions in North America today may be normal for the continent by the mid-21st century, due to a warming planet.

A team of scientists from the Lawrence Berkeley National Laboratory (Berkeley Lab), Lawrence Livermore National Laboratory (LLNL), and the National Oceanic and Atmospheric Administration (NOAA) came to this conclusion after analyzing 19 different state-of-the-art climate models. Looking at the balance between precipitation and evapotranspiration—the movement of water from soil to air—they found that no matter how rainfall patterns change over the next 100 years, a warming planet leads to drought. Their results were published in the December 2011 issue of the American Meteorological Society’s Journal of Hydrometerology.

“Drought is a relative condition and in general is characterized by a lack of available water. There are many indices for evaluating drought because different people require information about water availability in different ways,” says Michael Wehner, a climate scientist in the Berkeley Lab’s Computational Research Division and lead author of the paper. “Our results focus on a drought measure that is relevant to soil moisture and is of concern to agricultural and forestry interests. The models project widespread future drought conditions in the United States as the global climate warms over the course of this century.” 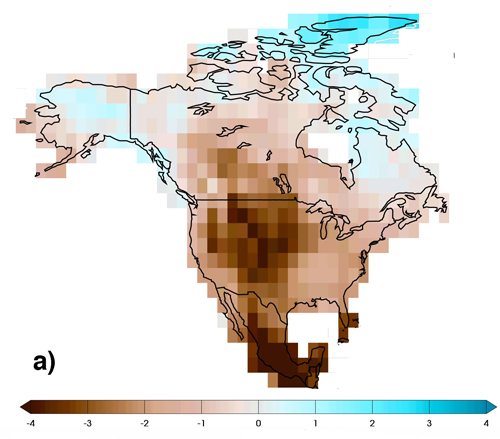 To determine today’s normal drought conditions, Wehner and his teammates looked at the average balance between rainfall and evapotranspiration for North America based on observational data collected by NOAA’s National Climatic Data Center for the period between 1950 and 1999.

The team then used global climate models to project the balance between rainfall and evapotranspiration over the course of this century. These models showed that the normal state for much of the continental United States and Mexico in the mid- to late-21st century would be conditions considered severe to extreme drought by today’s standards. Likewise, even though most of the simulations project precipitation increases in Canada, they show that mild and moderate droughts would also be a normal occurrence.

“Regardless of how precipitation changes, the models indicate that increased evapotranspiration due to warming will lead to decreases in soil moisture,” says Wehner.

“What readers should take away from this study is that a 2.5 degree centigrade increase in global temperature will induce a severe drying of soil in North America,” he adds. “In a business-as-usual scenario of future increases in atmospheric greenhouse gases, this level of warming would likely happen in the latter part of this century.”

In addition to Wehner, other co-authors on the study include David Easterling, Jay Lawrimore, Richard Heim and Russell Vose of NOAA’s National Climactic Data Center, and Benjamin Santer of LLNL.