With news this week of additional radioactive leaks from Fukushima nuclear power plants, the impact on the ocean of releases of radioactivity from the plants remains unclear. But a new study by U.S. and Japanese researchers analyzes the levels of radioactivity discharged from the facility in the first four months after the accident and draws some basic conclusions about the history of contaminant releases to the ocean.

The study, conducted by Woods Hole Oceanographic Institution chemist Ken Buesseler and two Japanese colleagues, Michio Aoyama of the Meteorological Research Institute and Masao Fukasawa of the Japan Agency for Marine-Earth Science and Technology, reports that discharges from the Fukushima Dai-Ichi nuclear power plants peaked one month after the March 11 earthquake and tsunami that precipitated the nuclear accident, and continue through at least July. Their study finds the levels of radioactivity, while quite elevated, are not a direct exposure threat to humans or marine life, but cautions that the impact of accumulated radionuclides in marine sediments is poorly known.

The release of radioactivity from Fukushima—both as atmospheric fallout and direct discharges to the ocean—represent the largest accidental release of radiation to the ocean in history. Concentrations of cesium-137, an isotope with a 30-year half life, at the plants’s discharge point to the ocean, peaked at over 50 million times normal/previous levels, and concentrations 18 miles off shore were much higher than those measured in the ocean after the Chernobyl accident 25 years ago. This is largely due to the fact that the Fukushima nuclear power plants are located along the coast, whereas Chernobyl was several hundred miles from the nearest salt water basins, the Baltic and Black Seas. However, due to ocean mixing processes, the levels are rapidly diluted off the Northwest coast of Japan. 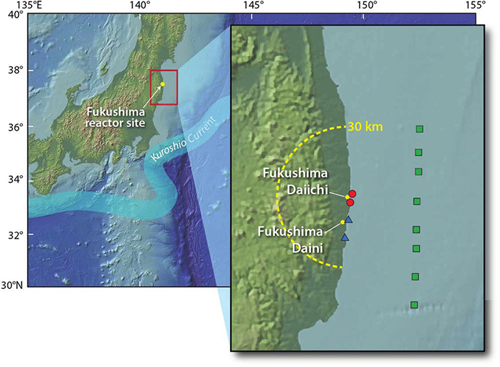 A new study uses publically available data to analyze levels of radioactivity released to the ocean as a result of the Fukushima accident. Map of sampling locations at the Fukushima Dai-ichi Nuclear Power Plant. Red dots N and S of the Dai-ichi NPP are discharge channels where samples were collected. Samples were also collected by TEPCO at the Dai-ni NPP with sampling indicated from shore near Dai-ni NPP and Iwasawa Beach (blue triangles). Also shown are sampling locations by MEXT 30 km offshore (green squares). Image credit: Ken Buesseler, Woods Hole Oceanographic Institution

The study used publically available data on the concentrations of cesium-137, cesium-134, and iodine-131 as a basis to compare the levels of radionuclides released into the ocean with known levels in the sea surrounding Japan prior to the accident. Impacts of the Fukushima Nuclear Power Plants on Marine Radioactivity is published in the latest issue of Environmental Science & Technology and is available on the journal’s website. Buesseler received funding support for this work from the Gordon and Betty Moore Foundation and the National Science Foundation’s Chemical Oceanography program.

The investigators compiled and analyzed data on concentrations of cesium and iodine in ocean water near the plants’s discharge point made public by TEPCO, the electric utility that owns the plants, and the Japanese Ministry of Culture, Sports, Science and Technology (MEXT). The team found that releases to the ocean peaked in April, a fact they attribute to “the complicated pattern of discharge of seawater and fresh water used to cool the reactors and spent fuel rods, interactions with groundwater, and intentional and unintentional releases of mixed radioactive material from the reactor facility.” They also found that the releases decreased in May by a factor of 1000, “a consequence of ocean mixing and a primary radionuclide source that has dramatically abated,” they report. 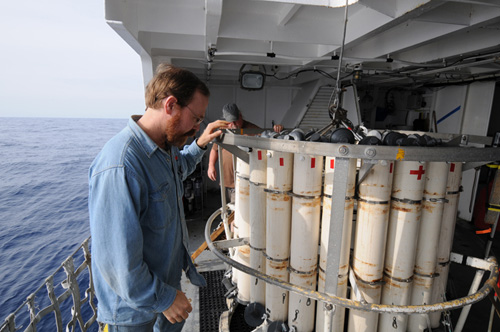 Marine chemist Ken Buesseler (left) and University of Hawaii technician Paul Balch make a final inspection of a water sampling rosette prior to deploying it in the Pacific in June 2011. Photo by Ken Kostel, Woods Hole Oceanographic Institution

While concentrations of some radionuclides continued to decrease, by July they were still 10,000 times higher than levels measured in 2010 off the coast of Japan. This indicates the plants “remain a significant source of contamination to the coastal waters off Japan,” they report. “There is currently no data that allow us to distinguish between several possible sources of continued releases, but these most likely include some combination of direct releases from the reactors or storage tanks, or indirect releases from groundwater beneath the reactors or coastal sediments, both of which are likely contaminated from the period of maximum releases.”

Buesseler says that at levels indicated by these data the releases are not likely to be a direct threat to humans or marine biota in the surrounding ocean waters, but says there could be concern if the source remains high and radiation accumulates in marine sediments. “We don’t know how this might impact benthic marine life, and with a half-life of 30 years, any cesium-137 accumulating in sediments or groundwater could be a concern for decades to come,” he said.

In June, Buesseler led the first international, multidisciplinary assessment of the levels and dispersion of radioactive substances in the Pacific Ocean off the Fukushima Dai-Ichi nuclear power plants—a major research effort also funded by the Gordon and Betty Moore Foundation. During the research expedition, a group of 17 researchers and technicians spent two weeks aboard the University of Hawaii research vessel R/V Kaimikai-O-Kanaloa examining many of the physical, chemical, and biological characteristics of the ocean that determine the fate of radioactivity in the water and potential impact on marine biota. The results of their initial assessments will be presented in Salt Lake City in February 2012 at the Ocean Sciences Meeting, an international gathering of more than 4,000 researchers sponsored by The Oceanography Society, the American Society of Limnology and Oceanography, and the American Geophysical Union.

While international collaborations for comprehensive field measurements to determine the full range of isotopes released are underway, it will take some time before results are available to fully evaluate the impacts of this accident on the ocean.