To Turn Up The Heat in Chilies, Just Add Water

Biologists have learned in recent years that wild chilies develop their trademark pungency, or heat, as a defense against a fungus that could destroy their seeds. But that doesn’t explain why some chilies are hot and others are not.

New research provides an answer: Hot chilies growing in dry areas need more water to produce as many seeds as non-pungent plants, but the Fusarium fungus is less of a threat in dryer environments so chilies in those areas are less likely to turn up the heat. In wetter regions, where Fusarium thrives, wild chilies build up their reserves of spicy capsaicin in self-defense. 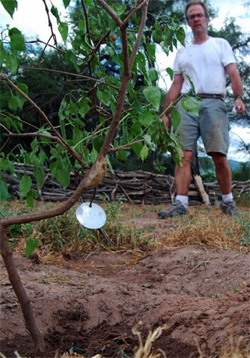 “Despite the reduced benefit of pungency in dry environments, hot plants still occur there, as does the deadly fungus. That suggests that the greater presence of non-pungent plants that produce substantially more seeds is the result of a fitness-based tradeoff,” said David Haak, lead author of a paper describing the research published Wednesday (Dec. 21) in Proceedings of the Royal Society B. The Royal Society is the United Kingdom’s academy of science.

The scientists examined pungency differences by comparing the proportion of pungent plants with that of non-pungent plants in 12 populations of wild chilies in southeastern Bolivia along a 185-mile line that gradually progressed from a relatively dry region to a wetter region. They conducted plant censuses in focal populations five times between 2002 and 2009, and tagged plants in each census so they could determine new seedlings the next time.

They found that, starting in the dryer northeast part of the section, 15 to 20 percent of the plants had pungent fruit, and pungency increased along the line toward the wetter southwest, where they never found a single plant that did not produce pungent fruit.

They also selected three populations of chili plants that each produced both pungent and non-pungent fruit and spanned the range of rainfall and pungency differences. They then grew seeds from those plants in the UW Botany Greenhouse to examine what affect water availability had on pungency. 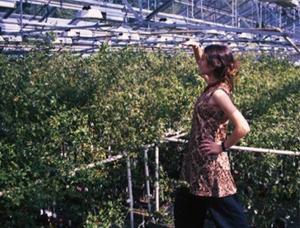 The 330 plants that resulted from those seeds were grown under identical conditions until they reached their first flowering, then were separated into two groups – one that received plenty of water and one that was stressed by receiving only the amount of water available to plants in the driest area of Bolivia from which seeds were taken.

The scientists found that under water-stressed conditions, non-pungent plants produced twice as many seeds as pungent plants. That suggests the pungent plants trade some level of fitness for protection from the Fusarium fungus, Haak said.

The researchers determined the pungent plants have developed a reduced efficiency in water use, so in dryer areas they produce fewer seeds and are more limited in reproduction. In wetter areas, non-pungent plants are at a reproductive disadvantage because they are much more likely to have their seeds attacked by the fungus.

“It surprised us to find that the tradeoff to produce capsaicin in pungent plants would involve this major physiological process of water-use efficiency,” Haak said.

He noted that over the entire range, 90 to 95 percent of the chili fruits had some level of fungal infection, and pungent plants were better able to defend themselves.

The research was funded by grants from the National Science Foundation; the National Geographic Society; Sigma Xi, the scientific research society; and the UW Department of Biology.