A demonstration project on the southeastern tip of Australia has helped to verify that depleted natural gas reservoirs can be repurposed for geologic carbon sequestration, which is a climate change mitigation strategy that involves pumping CO2 deep underground for permanent storage.

During an 18-month span beginning in April 2008, an international team of researchers injected 65,000 tonnes of CO2-rich gas two kilometers underground into a depleted gas field in western Victoria, Australia. That’s about 130 tonnes of CO2 per day, or the amount emitted by a small, 10-megawatt power plant. It’s also the daily CO2 emissions required to supply 6000 average U.S. homes with electricity. 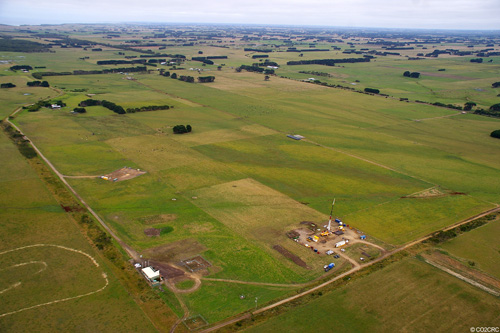 Extensive monitoring conducted during and after the injection found no measureable effect of stored CO2 on soil, groundwater, or the atmosphere.

“There was no discernible leakage. The CO2 stayed within the reservoir and behaved as expected,” says Barry Freifeld, a mechanical engineer in Berkeley Lab’s Earth Sciences Division who helped set up and interpret the site’s well-based monitoring equipment.

Geological cross-section of the Otway Project. CO2-rich gas is extracted from the Buttress well (on the left), injected into the depleted gas field using CRC-1, and the Naylor-1 well houses the monitoring equipment installed by Berkeley Lab scientists. Faults are black lines. Image credit: Berkeley Lab

The Otway Project is run by the Cooperative Research Centre for Greenhouse Gas Technologies (CO2CRC), an Australian-led collaboration of universities and research organizations that includes Berkeley Lab scientists. The science behind the project is outlined in a paper published online last month in the journal Proceedings of the National Academy of Sciences.

Geologic carbon sequestration involves capturing CO2 from large stationary sources, such as coal-burning power plants, and injecting it deep underground into rock formations that trap the greenhouse gas. The technology holds promise as a way to curb climate change because fossil fuels will likely remain cheap and plentiful for decades to come.

Scientists are looking to depleted gas reservoirs as a possible target for carbon sequestration because the reservoirs have a proven ability to store gas. The same caprock that trapped natural gas for millions of years can also trap CO2. Depleted gas reservoirs also provide some of the infrastructure needed for injection, such as boreholes and a pipeline network.

They’re also plentiful. A 2009 report by the International Energy Agency Greenhouse Gas R&D Program estimates that 160 gigatons of capacity in depleted gas fields—matched to point sources—will be available by 2050. 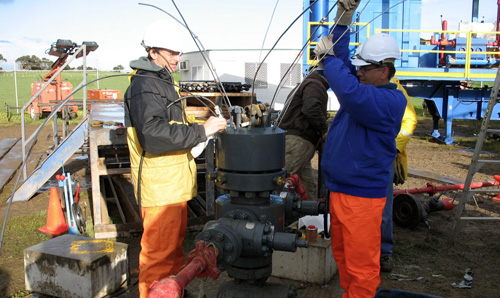 But the science of storing CO2 in depleted gas fields has needed real-world verification, which is why the CO2CRC team started the Otway Project. The group developed computer models to track the subsurface flow of CO2 at the site. They conducted risk assessment analyses and met with members of the surrounding community. They also blanketed the site with a network of soil, groundwater, air, and subsurface monitoring equipment.

As part of this effort, Freifeld and fellow Berkeley Lab scientist Tom Daley traveled to Otway in 2007, before CO2 injection began, to help oversee the installation of fluid sampling tools called U-tube samplers. The apparatus was developed at Berkeley Lab and enables the collection of subsurface fluids at the same pressures that occur deep underground, preserving the samples’ chemical integrity during the collection process.

Three U-tube samplers were lowered deep into a borehole that was once used to extract natural gas, but is now used for monitoring purposes only. Once the operation began in 2008, technicians collected U-tube samples almost weekly. These samples allowed scientists to monitor the CO2 as it filled the reservoir. 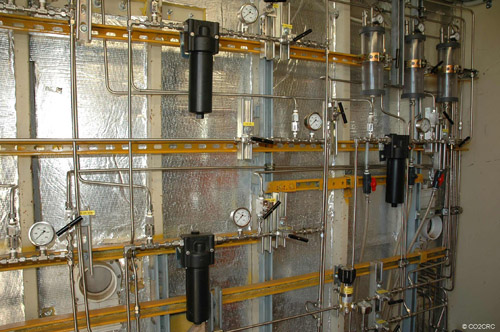 U-tube sampling: High quality well bore fluid and gas samples are collected at reservoir pressure from multiple levels to detect the CO2 arrival at the Naylor-1 well and to characterize chemical changes associated with the CO2 arrival. Image credit: CO2CRC

Freifeld and Daley also installed extremely sensitive seismic and acoustic monitoring equipment in the borehole that enabled technicians to ”image” the movement of CO2 within the reservoir.

“We found what we expected. The CO2 largely replaced the volume previously occupied by the natural gas,” says Freifeld. “The reservoir had filled with water since the natural gas was extracted, and we watched as the injected CO2 pushed the water to a level below our instruments.”

Additional calculations conducted by the CO2CRC team predict that between 56 percent and 84 percent of the space originally occupied by the natural gas is now reoccupied by CO2. These findings help buttress the conclusion that depleted gas fields have enough storage capacity to make a significant contribution to reducing global emissions, the authors say in their Proceedings of the National Academy of Sciences paper.

The project was supported in part by the US Department of Energy.