Award-winning journalist, activist, and author Charlayne Hunter-Gault told a packed audience at Yale that lessons learned from the civil rights movement still have relevance for current and future generations.

Joining Hunter-Gault for the discussion was Dr. James P. Comer, the Maurice Falk Professor of Child Psychiatry at the Yale School of Medicine’s Child Study Center, and founder of the School Development Program.

Comer, who has been a member of the Yale faculty for 45 years, noted that his relationship with Hunter-Gault spans decades. In fact, she wrote the introduction to Comer’s first book, published in 1989, a tribute to his mother titled “Maggie’s American Dream.” He commended Hunter-Gault’s commitment as an advocate for social justice.

Hunter-Gault recounted that early in her journalism career there was an underrepresentation of reporters of color. In addition, she noted, the majority of media coverage about African Americans did not delve deeply enough into their accomplishments or certain issues affecting their community. She suggested that, to a certain extent, this is still the case today.

Having recently returned to United States after spending the past 16 years living in Africa and reporting on South Africa, she expressed her enthusiasm about becoming reacquainted with certain aspects of American culture. However, she acknowledged certain distressing issues.

“For example, in Washington, D.C., the rates of HIV/AIDS, especially among women of color, is as high or higher than it is in many parts of Africa, and South Africa has one of the highest HIV rates in the world,” she said. “It is troublesome that issues such as this do not seem to be a significant part of the public conversation.” 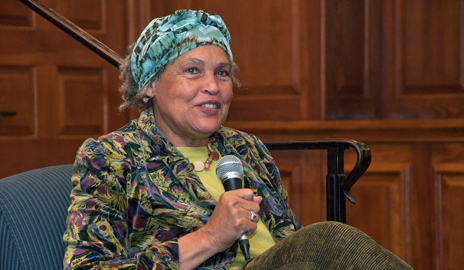 Charlene Hunter-Gault has spent the last 16 years living in Africa and reporting on South Africa. (Photo by Kimberly Pasko)

Hunter-Gault suggested that people might be more willing to engage in discussions about such topics if the news was presented in a more informative way. The mainstream media needs to more closely interrogate the causes behind important issues, instead of focusing on the “hot” story of the moment, only to move on to the next item, she said.

She emphasized that members of the civil rights generation had the courage and commitment to put their lives on the line to further their cause. “It is also important for young people today to have values that are timeless and transcendent,” she said. “In order to maintain the promise of democracy in America, it is important to understand the values that motivated the young people behind the civil rights movement and ultimately ensured their success.

“The present generation must be vigilant every day in order to protect the rights guaranteed by our Constitution,” she added. 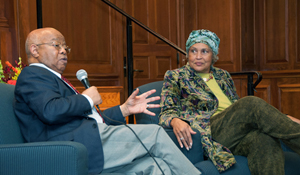 Referring to her latest book, “To the Mountaintop: My Journey Through the Civil Rights Movement” (2012), Hunter-Gault said, “It is not so much about my own experience, but about people of all races and creeds who made sacrifices to change a racist, separate, and unequal system.” She said her motivation for writing the book was to share with today’s youth the values that enabled a generation to change America in the 1960s.

Citing philosopher Frantz Fanon’s belief that each generation, out of relative obscurity, has to discover its mission and accept it or reject it, Hunter-Gault expressed her confidence in today’s young people. “I do not have any concerns about this generation,” she said. “I think that conscientious young people will find solutions for themselves. You have to believe in the importance of individual action, such as being a good citizen and making sure you vote.”

Hunter-Gault referred to the famous “Mountaintop” speech delivered by the Reverend Martin Luther King Jr. hours before his assassination: “King said that we are going to have some difficult days ahead, but that he had been to the top of the mountain and seen what was on the other side.”

“It is a really important cause for me to get young people to understand our history and to realize the power that they have,” said Hunter-Gault. “When they see what young people like themselves were able to accomplish in the past, I think it will encourage them to do whatever they can do to ensure that we all get to a mountaintop that we can be proud of and that our country stays on a path that King and so many others felt was the right course for us.”

She concluded with words of encouragement to the audience: “While there may be some difficult days ahead, I want to say in closing, particularly to young people: Don’t let anybody turn you around.”

During her visit to New Haven, Hunter-Gault received the International Festival of Arts & Ideas’ third annual Visionary Leadership Award, which honors a leader whose “trailblazing work is impacting the world.” The presentation and luncheon included an on-stage conversation between Hunter-Gault and Beverly Gage, professor of history at Yale.

While on campus, she also met with student journalists at the Yale Daily News.

The Branford College master’s tea was sponsored by the Poynter Fellowship in Journalism at Yale.