Creeping climate change in the Southwest appears to be having a negative effect on pinyon pine reproduction, a finding with implications for wildlife species sharing the same woodland ecosystems, says a University of Colorado Boulder-led study.

“We are finding significant declines in pinyon pine cone production at many of our study sites,” said Redmond. “The biggest declines in cone production we measured were in areas with greater increases in temperatures over the past several decades during the March to October growing season.”

Temperature and precipitation were recorded at official long-term weather stations located near each of the nine sites. Overall, average temperatures in the study areas have increased by about 2.3 degrees Fahrenheit in the past four decades, she said. 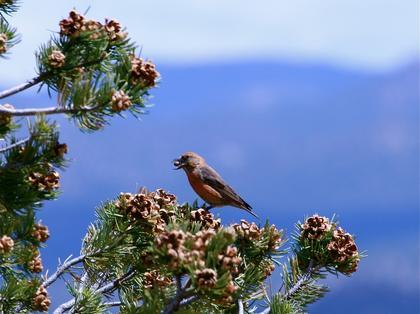 A decline in the reproduction of pinyon pine trees in the Southwest in recent decades could affect a number of different bird and mammal species, including the crossbill seen here feeding on a pinyon pine nut. Photo courtesy of Jeffry Mitton. University of Colorado

A paper on the subject by Redmond, Assistant Professor Nichole Barger of CU-Boulder and Frank Forcella of the United States Department of Agriculture in Morris, Minn., appeared in a recent issue of the journal Ecosphere, published by the Ecological Society of America. The new study was funded primarily by a National Science Foundation Graduate Research Fellowship to Redmond.

The cones in which the pinyon seeds are produced are initiated two years prior to seed maturity, and research suggests the environmental stimulus for cone initiation is unseasonably low temperatures during the late summer, said Redmond. Between 1969 and 2009, unseasonably low temperatures in late summer decreased in the study areas, likely inhibiting cone initiation and development.

The study is one of the first to examine the impact of climate change on tree species like pinyon pines that, instead of reproducing annually, shed vast quantities of cones every few years during synchronous, episodic occurrences known as “masting” events. Redmond said such masting in the pinyon pine appears to occur every three to seven years, resulting in massive “bumper crops” of cones covering the ground.

In the new Ecosphere study, the researchers compared two 10-year sequences of time. In addition to showing that total pinyon pine cone production during the 2003-2012 decade had declined from the 1969-1978 decade in the study areas, the team found the production of cones during masting events also declined during that period.

Some scientists believe masting events evolved to produce a big surplus of nut-carrying cones — far too many for wildlife species to consume in a season — making it more likely the nuts eventually will sprout into pinyon pine seedlings, she said. Others have suggested masting events occur during favorable climate conditions and/or to increase pollination efficiency. “Right now we really don’t know what drives them,” Redmond said.

“Across a range of forested ecosystems we are observing widespread mortality events due to stressors such as changing climate, drought, insects and fire,” said CU’s Barger.  “This study provides evidence that increasing air temperatures may be influencing the ability of a common and iconic western U.S. tree, pinyon pine, to reproduce. We would predict that declines in pinyon pine cone production may impact the long-term viability of these tree populations.”

Wildlife biologists say pinyon-juniper woodlands are popular with scores of bird and mammal species ranging from black-chinned hummingbirds to black bears. A 2007 study by researchers at the University of Northern Arizona estimated that 150 Clark’s Nutcrackers cached roughly 5 million pinyon pine nuts in a single season, benefiting not only the birds themselves but also the pines whose nuts were distributed more widely for possible germination.

For the new study, Redmond revisited nine pinyon pine study sites scattered throughout New Mexico and Oklahoma that had been studied previously in 1978 by Forcella. Both Forcella and Redmond were able to document pinyon pine masting years by counting small, concave blemishes known as “abscission scars” on individual tree branches that appeared after the cones have been dropped, she said.

Since each year in the life of a pinyon pine tree is marked by a “whorl” — a single circle of branches extending around a tree trunk — the researchers were able to bracket pinyon pine reproductive activity in the nine study areas for the 1969-1978 decade and 2003-2012 decade, which were then compared.

Pinyon pines take three growing seasons, or about 26 months, to produce mature cones from the time of cone initiation.  Low elevation conifers including pinyon pines grow in water-limited environments and have been shown to have higher cone output during cool and/or wet summers, said Redmond. In addition to the climate-warming trend under way in the Southwest, the 2002-03 drought caused significant mortality in pinyon pine forests, Redmond said.

“Miranda’s ideas and accompanying results will be of value to ecologists and land managers in the deserts of the Southwest and beyond,” said Forcella, now a research agronomist in the USDA’s Agricultural Research Service.  “The work is evidence that the University of Colorado continues to cultivate a cadre of high-caliber graduate students for which it rightfully can take tremendous pride.”