University of Minnesota researchers have taken a step toward providing first responders with a new means of finding their way through dark or smoky buildings.

Lucy Dunne, an assistant professor in the College of Design’s Department of Design, Housing & Apparel, and graduate student Tony Carton, working with funding from the U’s Minnesota Agricultural Experiment Station to augment the sensory awareness of first responders like firefighters, designed gloves that use ultrasonic sensors to detect walls and other objects. 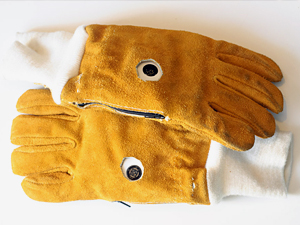 When the sensors detect an object, a microcontroller translates the sensor signal into vibrations: the closer the object, the stronger the vibes. The technology has not been tested under field conditions, but in lab experiments blindfolded volunteers found the sensors “intuitive” and were able to use them to reliably detect the presence and position of obstacles.

“In design, there is a lot of value in making a prototype. Doing so moves the idea from our minds into the physical world, giving us the ability to evaluate and iterate,” says Carton, who designed and built the glove prototypes. “This prototype is just the start of an interplay between the opportunities we have technologically, and the needs of the first responders who could use improved perception.”

Truly a work in progress

The research is more about exploring the broader potential for developing sensory augmentation through wearable devices than about developing a product that will be on the shelves in the near future.

“First responders are our target user group,” Dunne explains. “The exciting thing is that smart clothing can give a first responder the ability to perceive things that they can’t perceive now, for example, by making them aware of changes in their vital signs, or giving them a ‘sixth sense’ about changes in the environment.”

The technology used in the vibrotactile gloves is fairly simple, she says, and has been implemented in other forms. The challenges have more to do with implementation than the exact technology. For example, an optimal way must be found to display the signal intuitively, and tell firefighters or other users what’s going on without asking them to carry or wear more equipment.

Now, firefighters must feel their way through dark or smoky spaces, and so it was no wonder the sensor-equipped gloves piqued their interest.

“They were curious—this was the first time many had put on a tactile display,” says Dunne. “They said there was a lot of interesting potential for technology to change the way they do their jobs.”

The researchers began work on the gloves in October. And although lab studies show that the concept works, they already see avenues for improvement.

“For example, we plan to improve the prototype in terms of the sensitivity and responsiveness of the vibration signal so firefighters can make finer and faster distinctions between distances,” Dunne explains. “With this technology, we can’t tell a human body from other obstacles, which is something the Minneapolis firefighters were very interested in being able to do.”

Carton sees one valuable task the technology already can perform:

“Now that we have something in hand, we are taking it to fire departments and other emergency-response groups and saying, ‘Here’s an example of something we’ve made, an example of the research we do, and let’s talk about the other needs you have.’”