A new chemical analysis of lunar material collected by Apollo astronauts in the 1970s conflicts with the widely held theory that a giant collision between Earth and a Mars-sized object gave birth to the moon 4.5 billion years ago.

In the giant-collision scenario, computer simulations suggest that the moon had two parents: Earth and a hypothetical planetary body that scientists call “Theia.” But a comparative analysis of titanium from the moon, Earth and meteorites, published by Junjun Zhang, graduate student in geophysical sciences at the University of Chicago, and four co-authors indicates the moon’s material came from Earth alone.

If two objects had given rise to the moon, “Just like in humans, the moon would have inherited some of the material from the Earth and some of the material from the impactor, approximately half and half,” said Nicolas Dauphas, associate professor in geophysical sciences at UChicago, and co-author of the study, which appears in the March 25 edition of Nature Geoscience.

“What we found is that the child does not look any different compared to the Earth,” Dauphas said. “It’s a child with only one parent, as far as we can tell.” 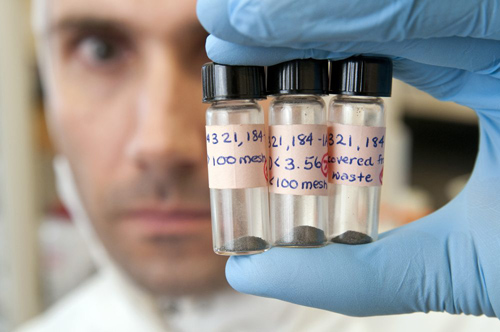 Nicolas Dauphas, UChicago associate professor in geophysical sciences, holds vials of material collected from the moon during the Apollo 14 mission. He and graduate student Junjun Zhang also worked with samples from the Apollo 15, 16 and 17 lunar missions in their new study on the origin of the moon. Photo by Lloyd DeGrane

The research team based their analysis on titanium isotopes — forms of titanium that contain only slight subatomic variations. The researchers selected titanium for their study because the element is highly refractory. This means that titanium tends to remain in a solid or molten state rather than becoming a gas when exposed to tremendous heat. The resistance of titanium isotopes to vaporization makes it less likely that they would become incorporated by the Earth and the developing moon in equal amounts.

Titanium also contains different isotopic signatures forged in countless stellar explosions that occurred before the sun’s birth. These explosions flung subtly different titanium isotopes into interstellar space. Different objects in the newly forming solar system gobbled up those isotopes in different ways through collisions, leaving clues that let scientists infer where the solar materials including the moon came from.

“When we look at different bodies, different asteroids, there are different isotopic signatures. It’s like their different DNAs,” Dauphas said. Meteorites, which are pieces of asteroids that have fallen to Earth, contain large variations in titanium isotopes. Measurements of terrestrial and lunar samples show that “the moon has a strictly identical isotopic composition to the Earth,” he said.

“We thought that the moon had two parents, but when we look at the composition of the moon, it looks like it has only one parent,” Zhang said. 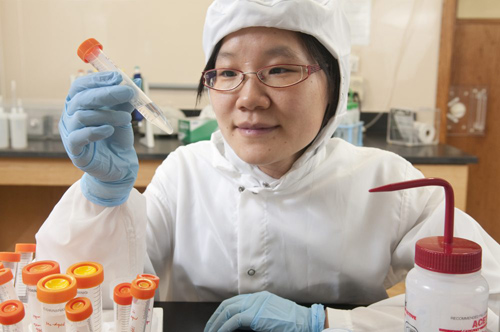 The Earth and the moon are constantly bombarded by cosmic rays from the sun and from more distant sources in the galaxy. Earth’s atmosphere and magnetic field prevents most of these rays from reaching its surface, but the moon has no such protection.

“We compared the titanium isotopic composition with samarium and gadolinium since those two systems are very sensitive to the cosmic-ray effect,” Zhang said. The only compositional differences the scientists expected to see in samarium and gandolinium between Earth and moon would be the result of cosmic rays. “We found a very nice linear correlation between titanium and samarium or gadolinium,” she said.

Zhang’s titanium analyses greatly reinforce previous work by other researchers who came to the same conclusion after comparing terrestrial and lunar oxygen isotopes, which are less refractory and thus more likely to gasify during a giant impact than titanium.

Solving the conundrum of the moon’s origin probably will prove challenging because all of the alternative scenarios for the moon’s formation have drawbacks.

For example, it is possible that even though titanium is refractory, it might still have gasified in the giant impact and then became incorporated into the disk of Earth-orbiting material that developed into the moon. This might have erased the signature of the titanium from Theia, which could explain the UChicago team’s observations. The problem with this scenario is that the disk may have fallen back to Earth if too much material was exchanged between the two bodies.

An old idea, long abandoned, is that the moon arose via fission from a molten, rapidly rotating Earth following a giant impact. This idea explains the similarity between Earth and moon, but how such a large, concentrated mass could spin fast enough to split in two remains problematical.

According to a third scenario, Earth collided with an icy body lacking entirely in titanium. There are no bodies made purely of ice in the solar system, however. “They would always have a significant fraction of solid material, so you would still expect the object to deliver some titanium,” Dauphas said.

It’s also possible that Theia had the same composition as Earth. This is unlikely, however, because of the widely accepted view that the Earth incorporated material over tens of millions of years in collisions with smaller bodies that flew in from different regions of the developing solar system.

“We thought we knew what the moon was made of and how it formed, but even 40 years after Apollo, there is still a lot of science to do with those samples that are in curatorial facilities at NASA,” Dauphas said.