A New Tool to Reveal Structure of Proteins

COLUMBUS, Ohio – A new method to reveal the structure of proteins could help researchers understand biological molecules – both those involved in causing disease and those performing critical functions in healthy cells.

For roughly a decade, a technique called solid state nuclear magnetic resonance (NMR) spectroscopy has allowed researchers to detect the arrangements of atoms in proteins that defy study by traditional laboratory tools such as X-ray crystallography. But translating solid state NMR data into an actual 3D protein structures has always been difficult.

In the current online edition of Nature Chemistry, Christopher Jaroniec, associate professor of chemistry at Ohio State University, and his colleagues describe a new solid state NMR method that uses paramagnetic tags to help visualize the shape of protein molecules. 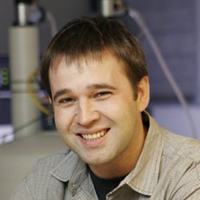 “Structural information about biological molecules is critical to understanding their function,” Jaroniec said. “Our new method promises to be a valuable addition to the NMR toolbox for rapidly determining the structures of protein systems which defy analysis with other techniques.”

Such protein systems include amyloids, which are fibrous clusters of proteins found in diseased cells, and associated with the development of certain neurological diseases in humans.

“Although for the purposes of the paper we tested the method on a small model protein, the applications are actually quite general,” Jaroniec added. “We expect that the method will work on many larger and more challenging proteins.”

Protein molecules are made up of long chains of amino acids folded and wrapped around themselves, like tangled spaghetti. Every type of protein folds into its own unique pattern, and the pattern determines its function in the body. Understanding why a protein folds the way it does could give scientists clues on how to destroy a protein, or alter its function.

To test their method, the researchers chose a protein called GB1, a common protein found in Streptococcus bacteria. GB1 has been much studied by scientists, so the structure is already known. They engineered a form of the protein in which certain amino acids along the chain were replaced with a different amino acid –  cysteine –  and created the right chemical conditions for yet another tag – one containing an atom of copper – to stick to the cysteine. The amino acid-copper tags are known as “paramagnetic” molecules, and they significantly influence the signals emitted by the different protein atoms in the magnetic field of an NMR instrument.

The researchers were able to determine the locations of the protein atoms relative to the paramagnetic tags, and use this information to calculate the folded shape of the GB1 protein.

Jaroniec’s partners on this project included Ishita Sengupta, Jonathan Helmus and Philippe Nadaud, all doctoral students at Ohio State, and Charles Schwieters of the National Institutes of Health.