‘Tis Better to Give Than to Receive?

Providing support to a loved one offers benefits to the giver, not just the recipient, a new brain-imaging study by UCLA life scientists reveals.

“When people talk about the ways in which social support is good for our health, they typically assume that the benefits of social support come from the support we receive from others, but it now seems likely that some of the health benefits of social support actually come from the support we provide to others,” said Naomi Eisenberger, a UCLA assistant professor of psychology and the senior author of the study, published today in the online edition of Psychosomatic Medicine, a peer-reviewed health psychology journal.

Eisenberger and UCLA psychology graduate student Tristen Inagaki studied 20 young heterosexual couples in good relationships at UCLA’s Ahmanson–Lovelace Brain Mapping Center. The 20 women in the couples underwent functional magnetic resonance imaging (fMRI) brain scans while their boyfriends were just outside the scanner receiving painful electric shocks. At times, the women could provide support by holding the arm of their boyfriends, while at other times, they had to watch their boyfriends receive shocks without being able to provide support (each woman instead held a squeeze-ball). At still other times, the boyfriends did not receive a shock, and the women could either touch or not touch them.

The life scientists found that when women gave support to their boyfriends in pain, the women showed increased activity in reward-related regions of the brain, including the ventral striatum and septal area. In addition, the more reward-related neural activity these women showed, the more connected they reported feeling with their boyfriends while providing support. Under conditions in which no support was provided, these regions showed decreased activity. 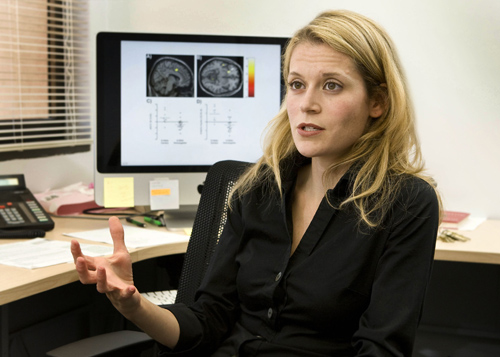 “One of these regions, the ventral striatum, is typically active in response to simple rewards like chocolate, sex and money,” Eisenberger said. “The fact that support-giving also activates this region suggests that support-giving may be processed by the brain as a very basic type of rewarding experience.”

“Giving to others has benefits,” said Inagaki, the lead author of the study, who has been awarded National Science Foundation and Jacob K. Javits fellowships. “We even saw substantially more activity in these reward brain regions when the women were giving support than when they were touching their boyfriend when he was not getting shocked. You might think it would be more pleasurable to touch your boyfriend when he is not going through something painful, but we found the opposite, which was surprising.”

Eisenberger said she thinks the benefits of providing support also apply when a loved one is experiencing other stressful events, including emotionally painful events. She offered a theory to explain the findings.

“Giving support to those we are close to, such as family members or children, may increase their likelihood of survival and, therefore, the likelihood that our genes will get passed on,” she said. “Because of the importance of support-giving for the survival of our species, it is possible that over the course of our evolutionary history, support-giving may have become psychologically rewarding to ensure that this behavior persisted.”

Currently, Eisenberger and Inagaki are conducting further research on how giving to others may reduce our stress responses and ultimately contribute to better health.

The research was funded by UCLA’s Academic Senate.