COLUMBIA, Mo. – As feed prices have risen in recent years, feeding turkeys has become more costly than many producers can bear.  Satisfying turkeys’ hunger accounts for 70 percent of the cost of producing turkey meat.  Now, a researcher at the University of Missouri has produced a cheaper turkey feed, which could fill turkeys’ tummies and producers’ pockets.

“Cost reduction is a critical concern in the industry,” said Jeff Firman, a professor in the MU College of Agriculture, Food and Natural Resources. “High feed costs pose long-term problems to the industry and make it difficult to maintain a competitive edge against other sources of protein, such as pork and chicken.” 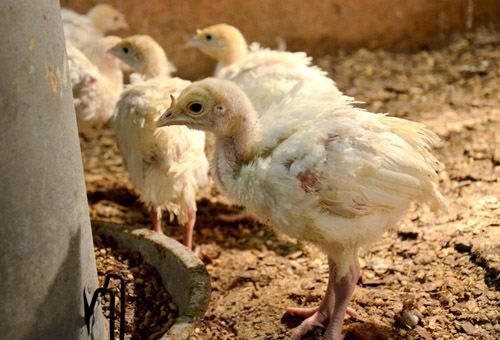 The new feed, known as the Missouri Ideal Turkey Diet, has the same nutritional qualities as typical pellet feed, but at a cost of $13 to $25 per ton less, a reduction of eight to 10 percent. If all turkey producers adopted use of the feed, the industry could save more than $100 million, Firman said.

Firman said turkey nutrition has changed little over the past 25 years. However, feed costs have increased in recent years. Feed is typically made with corn and soybeans, which have increased by one-third or more in price recently. While such increases have boosted production costs of white meat and giblets, retail price pressure isn’t letting producers pass the cost to the consumer. 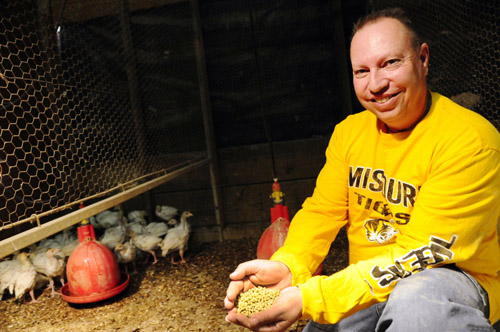 Jeff Firman, a professor in the MU College of Agriculture, Food and Natural Resources, has developed a feed for turkeys that costs 8 to 10 percent less than traditional turkey feed. Image credit: University of Missouri

Turkeys eating the Missouri Ideal Turkey Diet receive the same feed ration as turkeys eating traditional feed. Firman reduced production cost by finding the exact amount of amino acids necessary to maximize turkey growth. With this knowledge, he was able to reduce the usage of more expensive proteins and increase use of less expensive grains.

Firman tested the feed by putting 800 turkeys on the diet. He found that the birds met health targets and reached market weight within 18 to 21 weeks. Firman has tested the feed through several studies over the past three years.

Firman has made the formula available to the industry through presentations and publications. Producers create their own feed based on available feedstuffs with the guidance of computer-formulated diets using data from Firman’s lab. In addition, producers change the diet as birds mature to meet the growing turkeys’ nutritional needs.