Time for a nuclear clock

The atomic clocks that give extraordinary precision to the Global Positioning System (GPS) are based on transitions between energy states of atoms. Many advances have been made since the launch of the GPS satellites and the best world clock is now accurate to within one second every 30 billion years.

Now a four-investigator team that includes University of Delaware physicist Marianna Safronova has won a prestigious “Synergy Grant” from the European Research Council to build a new type of clock — the nuclear clock. She joins a team of pioneers in the field — Thorsten Schumm of Vienna University of Technology, Ekkehard Peik of Physicaklisch-Technishe Bundesanstalt (PTB) in Braunschweig and Peter Thirolf of Ludwig-Maximilians-Universität in Munich. 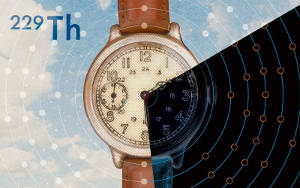 UD physicist Marianna Safronova and collaborators have won a highly competitive “Synergy Grant” from the European Research Council to develop nuclear clock technology. The grant is worth more than $15 million over six years. Illustration by Jeffrey C. Chase

The nuclear clock, which has not yet been built but has been on the radar of physicists for more than 15 years, is based on transition energy of the thorium-229 nucleus. No other known nucleus has transition energy that can be accessed by laser, which is a necessary part of building the clock.

Safronova brings theoretical expertise to the team. Her interest is in the new opportunities the nuclear clock will provide to search for undiscovered “new physics” effects. The nuclear clock is expected to be far more sensitive — by five or six magnitudes of order — than atomic clocks are to variations in fundamental constants of nature. It is also extremely sensitive to some of the candidates for dark matter — the “missing matter” particles that are still unknown but make up most of the matter in the universe.

“I want to discover natural phenomena we don’t yet know about,” she said.

The ERC grant, worth more than $15 million over a six-year period, will provide funding for building the nuclear clocks and exploration of fundamental physics.

The nuclear clock project is one of 37 projects to receive funding in the 2019 ERC competition, which allows groups of two to four researchers to collaborate on a project none could do alone. The awards are part of the European Union’s Horizon 2020 research and innovation program.

The 2019 competition was the first to include researchers from outside Europe. Eight projects, including Safronova’s, involve scientists based in the United States. She is one of 126 principal investigators overall. The projects will unfold at 95 universities and research centers in 20 countries.

Also contributing to the nuclear clock project will be researchers at the Max Planck Institute for Nuclear Physics (Heidelberg) and the Fraunhaufer Institute for Laser Technology (Aachen).

Mariana Safronova is a professor in UD’s Department of Physics and Astronomy. Her research focuses on atomic physics, computational physics, atomic clocks and the search for new physics, beyond the standard model of elementary particles. She earned her bachelor’s and master’s degrees in physics at Moscow State University and her doctorate at the University of Notre Dame. Before joining UD’s faculty in 2003, she did postdoctoral work at the University of Notre Dame and was a guest researcher at the National Institute of Standards and Technology (NIST). She is a fellow of the American Physical Society (APS) and past chair of the APS Division of Atomic, Molecular and Optical Physics.

The European Research Council, established by the European Union in 2007, is the premier European funding organization for frontier research. To date, it has supported more than 9,000 top researchers at various stages of their careers and more than 50,000 postdoctoral fellows, doctoral students and other staff working in their research teams. It is led by an independent governing body, the Scientific Council.