There is no line for the ATM where Thin Thin Kine lives in Myanmar. There is no ATM. Or anything in the way of brick-and-mortar banking services.

Kine owns an umbrella factory in a small village about an hour’s drive to the closest city, Pathien. More than 70 percent of adults in Myanmar lack formal access to credit, deposit and other financial services, according to the Making Access Possible survey by the United Nations Capital Development Fund.

Myanmar, with a population of more than 50 million people, is one of many countries around the world where banking services have been unavailable to those whose needs might be relatively small, on a scale of perhaps hundreds of dollars, which is considered to be “microfinance.”

Top photo: Thin Thin Kine examines one of the umbrellas made in her factory in Myanmar. She is among those worldwide who have benefitted from the growth of cloud-based banking in emerging and developing markets, where traditional banking services are not available. Photo credit: Microsoft

There are more than 2 billion people around the world who are “unbanked,” or 45 percent of adults who “still don’t have access to banking,” many of whom can benefit from microfinance, says Ben Robinson, chief marketing officer for Temenos, a global banking software provider based in Geneva, Switzerland.

“The problem is not one of demand – everybody would like access to banking services if they could have it,” he says. “All the problems are on the supply side, of the price point being too high” for banks to provide service because substantial investments in infrastructure and hardware are usually required.

Temenos is helping to change that by putting its core banking application into the cloud with Microsoft Azure, part of the Microsoft Cloud. Temenos clients, financial institutions, are able to reach even the remotest customers around the world, like Kine, who was issued a loan from Temenos client Fullerton Myanmar to start her umbrella factory. Fullerton Myanmar loan officers travel to meet customers where they live and work, and conduct secure transactions using smartphones and tablets with Temenos software and the Microsoft Cloud. 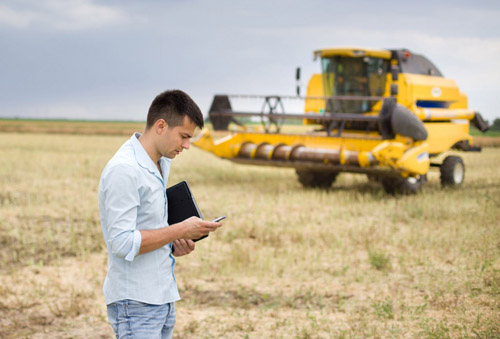 SeFia provides loans to the agricultural sector of Mexico. Their clients use the money to buy and maintain tractors, machinery and working capital. Photo credit: Microsoft

“It’s really exciting to be able see how we can integrate things like channels and core banking in the cloud, where you’ve got literally somebody out in the field with a tablet who is opening a loan, taking payments, doing banking in the middle of nowhere,” says Murray Gardiner, Temenos business director of Temenos MicroBanking Suite.

The financial information sent from that field, or from remote villages like Kine’s, is being synchronized through the cloud on Azure, “and it’s a seamless delivery,” Gardiner says.

Thousands of firms around the world use Temenos’ banking software, including 38 of the top 50 banks. Temenos also works with 240 small banks that are using a range of deployment methodologies, including the cloud, in Africa, Southeast Asia and parts of Latin America, Gardiner says, to bring microfinance banking services to customers.

“Cloud-based banking systems are really the future of the market,” says James M. O’Neill, a senior analyst with Celent, which provides technology research in the area of financial services.

“If you’re operating in a developing or emerging market, then cloud services are a potential solution to the problem that’s plagued banks in developing markets, which is the fact that dedicated telecommunications infrastructure is both very expensive and very unreliable,” O’Neill says.

By turning to the cloud for banking, says Gardiner, “We can eliminate another huge cost” for staff to run and maintain bank servers. 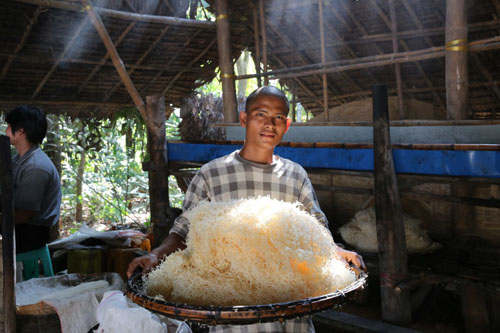 Yar Kode works at the noodle snack factory started in Myanmar by Win Win Soe with the help of a microfinance loan. Such loans can help stimulate local economies in emerging markets. Photo credit: Microsoft

“No matter how clever we are with how we use software for managing workflows and managing products and getting great information in the right hands at the right time, the big constraint we had up until our Azure program started was the fact that these banks still had to hire somebody, or a group of people, that would be able to run software locally, and they would have to buy expensive hardware, and they’d have to maintain it, and all the bits and spinning wheels that are necessary to keep a platform going,” Gardiner says.

Historically, the quality of that staffing has varied in emerging and developing countries, he says.

“You’ll go into a bank and you’ll find a server in an open room, and there are concerns about the bandwidth because the guys in the IT department are downloading movies,” Gardiner says. “They’re all on the Internet, all in the same environment. It’s completely exposed.”

With Temenos’ banking solution in the Microsoft Cloud, “your data is housed in a bunker that’s got the highest possible standards of security and encrypted transit of data. It’s far more secure,” he says.

Now, Gardiner continues, using Microsoft Cloud Services means Temenos can go “beyond engineering our products, engineering our systems and engineering our project management to fit various organizations. We can now take away the whole infrastructure problem and provide everything as a service. So banks no longer have to buy expensive computers, or tie down a lot of people focused on making the machines work. They can focus the energy of those people on exploiting the technology to push the limits of what they can do, and serve the customers, and we can take all of the complexity away.”

“At Fullerton Myanmar, this benefit was tangible,” says Niap. “We were able to open for business within three months, and roll out new branches quickly with minimal internal resources.”

O’Neil agrees about those advantages. Not having to worry about infrastructure helps banks with microfinance programs get more of their capital invested in “helping the businesses and the individuals they’re trying to help, instead of investing it in buildings and infrastructure,” he says.

“We have clients who produce livestock, milk, apples, nuts, corn, beans and vegetables,” says Luis Fernando Rosado, general manager at SeFia. “They use the money to buy tractors, agricultural machinery, production equipment,” and for working capital.

SeFia’s average loan amount is for $45,000. “We are very happy and proud in supporting the primary sector of the economy of our country, and to promote the development of people working in it,” Rosado says.

In emerging markets in Africa, Southeast Asia and parts of Latin America, microfinance can be a lifeline for those without banking services, and the cloud makes microfinance a reality that can happen anywhere, and for just about anyone.

“By giving people access to financial services, to credit, and to a way of saving at some rate of interest that’s positive to inflation, people are able to uplift themselves, help themselves, find a pathway out of poverty,” says Gardiner. “That’s the social objective, and what the economic imperative is. The trick is doing that on a viable and sustainable basis – and making it affordable, so that more people can have access to credit.”

It is an exciting time for microfinance, and for the people it can help, Gardiner says.

“We’re just on the cusp of including possibly 2 billion more people in formal financial arrangements,” he notes. “Finally, the world is recognizing that all those people who were hitherto excluded, because they were too costly to bank, can now be banked profitably.”