The Vikings: Yale Historian Looks at the Myths vs. the History

As a lead-up to the forthcoming History Channel series “Vikings,” Tom Ashbrook, host of NPR’s “On Point,” talked with a foremost authority on the subject — Yale’s Anders Winroth — to de-mystify the legendary raiders of the North.

Winroth is  professor and director of graduate studies in history. His most recently published book is “The Conversion of Scandinavia: Vikings, Merchants, and Missionaries in the Remaking of Northern Europe” (Yale University Press, 2011). His forthcoming volume, “A New History of the Viking Age,” will be published by Princeton University Press in 2014. YaleNews spoke with Winroth recently about some of the issues raised in his “On Point” interview. The following is an edited transcript.

The 793 raid on the monastery at Lindisfarne on the northeast coast of England was the first Viking attack that was written about, and it was a big shock to all of Europe. Alcuin, a great educator in Charlemagne’s court, was a particularly influential person who wrote about it. We see the attack through the eyes of the victims, who spread the word that the Vikings were bloody and violent. In fact, they were violent, but no more than anyone else at the time. Compared to Charlemagne’s armies, the Vikings were amateurs. The Vikings were actually just looking for better places to live and preferred not to kill or be killed for it.

We view the 1066 Battle of Hastings, where the Norman descendants of Vikings defeated the Anglo-Saxons and established their own king (William I) in England, as the end of the age of the seafaring Vikings. Incidentally, it was the battle of Stanford Bridge — just before Hastings — which the Normans lost, that determined their ultimate victory. The Anglo-Saxon army was so depleted by their pyrrhic victory earlier that week that they were unable to hold back their conquerors. 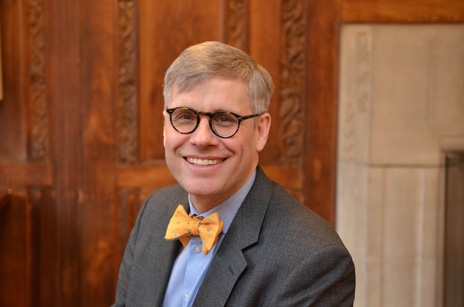 Did the Vikings leave any legacy?

The most important legacy they left us is our language. Norse words are so imbedded in modern English that we’re unaware of them, while we’re more apt to notice the French and Latin derived words in our vocabulary. Roberta Frank in the Yale English department came up with a paragraph that she allowed me to use in my book “A New History of the Viking Age,” which — with the exception of articles and prepositions — is composed entirely of Norse-derived words. The first sentence is:

The odd Norse loans seem an awesome window onto a gang of ungainly, rugged, angry fellows, bands of low rotten crooks winging it at the stern’s wake, sly, flawed “guests” who, craving geld, flung off their byrnies, thrusting and clipping calves and scalps with clubs.

Besides the English language, did they make any other lasting contributions to Western civilization?

I often say the Vikings introduced the Western world to death and taxes. Their raids obviously killed a lot of people, and when they attacked, Europeans realized they had to shape up to repel them. That meant kings had to raise money, and after they got what they could from the Church, they had to start taxing the people. The Norse invaders were determined to get what they wanted, and they continued to demand more and more both by threatening to strike and by kidnapping and charging enormous ransoms. Churches became impoverished. In 994 they threatened to burn down the Canterbury Cathedral unless the archbishop paid them off with a large sum of money. The archbishop, who a few decades earlier had controlled the most wealth in England at the time, had already paid them so much that he had to borrow money from another bishop.

Their constant threat also inspired kings to get their military organized. 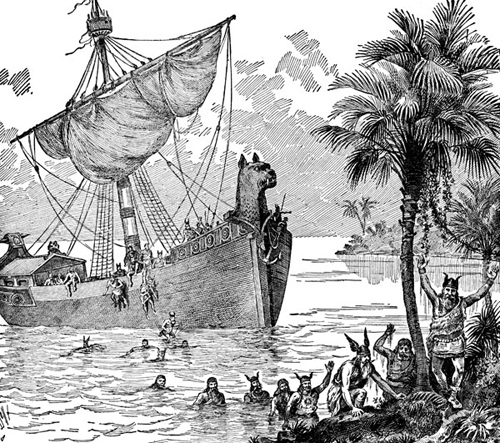 An illustration of Vikings on a boat. Date: 1917 or 1919. Author: John Clarke Ridpath. Image source: Wikipedia

Did they have any other economic impact?

The Vikings, who were as much traders as marauders, also helped Europe create money, which allowed commerce to take off. In Russia they met up with Arab merchants who used silver coins (dirhams) to pay for the Vikings’ slaves and fur.  Currency was not a novel idea in western Europe, but there was a desperate lack of it, since gold and silver was rare. The Norsemen introduced gold and silver from the rich Arab Caliphate. Bartering no longer needed to be the means of exchange.

Interestingly, schoolchildren on field trips in Scandinavia sometimes still find dirhams. Not long ago a boy found a trove of 16,000 coins, all made of silver that the Arabs had acquired in Afghanistan, at the easternmost point of their wide-reaching empire.

Did the Vikings have a “softer side”?

The Vikings excelled in the decorative arts — embellishing functional objects like swords and runic inscriptions, and crafting beautiful adornments, especially jewelry. Many Viking decorative motifs were adopted by the scribes who made illuminated manuscripts in the Middle Ages.

The idea that the Vikings introduced “democratic government” to places where they settled is largely a Romantic myth, but they did found the city of Dublin, among others.

It is also untrue that the Vikings were in any way more egalitarian toward women than the rest of the world at the time.

We often use — misuse? — the terms “Viking” and “Norman” interchangeably. Is there a difference?

Yes, the Normans were essentially the descendants of the original Vikings who settled in northern France and the Frankish natives of the region.

In your “On Point” interview you suggest that those who became Vikings were losers in their own land, because if they had succeeded as landowners and farmers, they would have stayed home. Is that right?

Not quite, but the Vikings were looking for opportunities that they didn’t have at home, and I think they were largely younger brothers who wouldn’t inherit property.

So the Vikings really didn’t wear horns on their helmets?

No. That was the invention of the costume designer for the first production of Wagner’s “Ring Cycle” in 1876.

Click here to listen to Winroth’s “On Point” interview.