A new long-term study of honey bee health has found that a little-understood disease study authors are calling “idiopathic brood disease syndrome” (IBDS), which kills off bee larvae, is the largest risk factor for predicting the death of a bee colony.

“Historically, we’ve seen symptoms similar to IBDS associated with viruses spread by large-scale infestations of parasitic mites,” says Dr. David Tarpy, an associate professor of entomology at North Carolina State University and co-author of a paper describing the study. “But now we’re seeing these symptoms – a high percentage of larvae deaths – in colonies that have relatively few of these mites. That suggests that IBDS is present even in colonies with low mite loads, which is not what we expected.” The study was conducted by researchers from NC State, the University of Maryland, Pennsylvania State University and the U.S. Department of Agriculture (USDA). 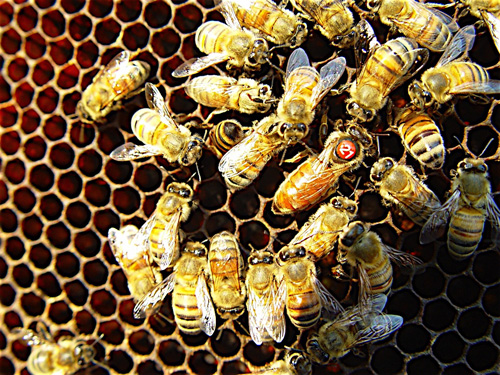 The study evaluated the health of 80 commercial colonies of honey bees (Apis mellifera) in the eastern United States on an almost monthly basis over the course of 10 months – which is a full working “season” for commercial bee colonies. The goal of the study was to track changes in bee colony health and, for those colonies that died off, to determine what factors earlier in the year may have contributed to colony death. Fifty-six percent of the colonies died during the study.

“We found that colonies affected by IBDS had a risk factor of 3.2,” says Dr. Dennis vanEnglesdorp of the University of Maryland, who was lead author on the paper. That means that colonies with IBDS were 3.2 times more likely to die than the other colonies over the course of the study.

While the study found that IBDS was the greatest risk factor, a close runner-up was the occurrence of a so-called “queen event.”

Honey bee colonies have only one queen. When a colony perceives something wrong with its queen, the workers eliminate that queen and try to replace her. This process is not always smooth or successful. The occurrence of a queen event had a risk factor of 3.1.

“This is the first time anyone has done an epidemiological study to repeatedly evaluate the health of the same commercial honey bee colonies over the course of a season,” Tarpy says. “It shows that IBDS is a significant problem that we don’t understand very well. It also highlights that we need to learn more about what causes colonies to reject their queens. These are areas we are actively researching. Hopefully, this will give us insights into other health problems, including colony collapse disorder.”

The paper, “Idiopathic brood disease syndrome and queen events as precursors of colony mortality in migratory beekeeping operations in the eastern United States,” is published in the February issue of Preventive Veterinary Medicine. Co-authors of the study include Dr. Eugene Lengerich of Penn State and Dr. Jeffery Pettis of USDA. The work was supported by USDA and the National Honey Board.