The tea party and the politics of paranoia

Members of tea party claim the movement springs from and promotes basic American conservative principles such as limited government and fiscal responsibility.

But new research by University of Washington political scientist Christopher Parker argues that the tea party ideology owes more to the paranoid politics associated with the John Birch Society — and even the infamous Ku Klux Klan — than to traditional American conservatism. 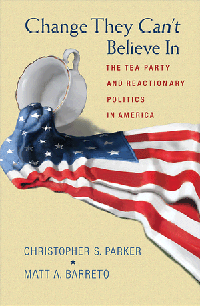 Parker is the author, with fellow UW political scientist Matt Barreto, of a new book titled “Change They Can’t Believe In: The Tea Party and Reactionary Politics in America,” published this spring by Princeton University Press.

At the heart of their book is a nationwide telephone survey overseen by Parker in early 2011 of 1,500 adults — equal numbers of men and women — across 13 geographically diverse states. The results starkly illustrate where tea partyers and true conservatives part ideological ways.

Asked flat-out if they think President Obama is “destroying the country,” only 6 percent of non-tea party conservatives agreed, a number that rose to 36 percent among all conservatives regardless of tea party affiliations. By contrast, 71 percent of self-identified tea party supporters thought this extreme statement true.

“And that’s just the tip of the iceberg,” said Parker, a UW associate professor of political science. “It’s no secret that tea party conservatives view President Obama with such contempt, but I am the first to document it empirically.”

Other survey results include:

And perhaps not surprisingly, fully three-quarters — 75 percent — of tea partyers said they wish President Obama’s policies to fail, compared with 32 percent of conservatives.

Parker called the tea party a continuation of what political scientist Richard Hofstadter in the 1960s described as “the paranoid style in American politics,” characterized by exaggeration, suspicion and conspiratorial fantasy.

Parker said, “Consider me a skeptic when tea party supporters call upon a conservative tradition to which they have but a slight claim.”