From a sweet deal to the bitter end, there’s no accounting for taste. Descriptions of flavor are littered throughout our common sayings, and there’s a good reason for that. Food and flavor sensations are a key part of the human experience, and everyone knows what “bitter” feels and tastes like.

But what happens when a scientist tries to quantify taste? What, exactly, is flavor? What makes a food taste sweet, or salty, or even cooked? 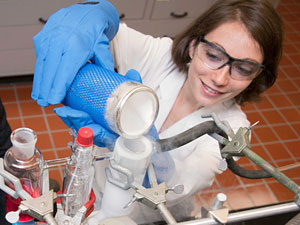 It turns out, the answer is complicated. There are about 10,000 taste buds in the human tongue, as well as texture and temperature receptors. All of those combined with smell create what we think of as flavor. It is a complex equation that involves thousands of chemical reactions in every mouthful. So while you might know what “sweet” is when you taste it, defining exactly what can cause a food to taste sweet is so complicated that scientists still struggle with the question. And food companies are very interested in the answers.

For example, what is it that makes whole grains taste bitter? Maybe more importantly, what does it take to change that bitter taste—to get more people to eat whole grain bread—without affecting the inherent health benefits? This is a question that plagues producers in the food industry, and it has framed one of the first projects for the University of Minnesota’s Flavor Research and Education Center.

The business of taste

Gary Reineccius, head of the Department of Food Science and Nutrition, founded the center in August 2011 as a partnership between scientists and businesses in the food and flavor industries. The concept attracted 12 members in its first year, including giants like Nestle, Pepsico and General Mills; that number has since grown to 19.

The center operates out of three world-class labs on the St. Paul campus. There, researchers break food down to its component parts, identifying single molecules or compounds that help create a target sensation. While the topics of the FREC’s research projects are influenced by its business members’ suggestions, the ultimate decision on a project’s plan and goals comes from associate professor and flavor researcher Devin Peterson, and the results and findings are published and shared with everyone.

“The center is about open innovation in taking foods apart and trying to understand what flavor is,” says Peterson. “There’s no directed research for any one particular company, no proprietary information. It’s about ideas that can benefit the industry as a whole.”

For instance, food processing companies struggle to provide more nutritious food options that can sell competitively with a less health-conscious option. And that’s important when just five percent of Americans consume the recommended amount of whole grains. At the suggestion of the center’s members, the FREC has tried to identify what molecules in whole grains, or what chemical reactions in producing whole grain bread, generate bitterness. The hope is that this information can lead to solutions that don’t rely on the conventional: adding sugar to mask the bitterness.

“A success for us would be to provide a means for more accessible, healthier, higher-quality products for the general population,” says Peterson.

The most important tool in the center’s research approach is an analytical method it is pioneering, dubbed “flavoromics.” The concept was developed by Reineccius after he attended a presentation about the medical use of mass spectrometry to detect the cause of silent heart attacks. That field of study uses a big-picture approach to map every tiny molecular compound in the body that is a result of creating energy—breath, waste, circulation—and applies statistical analysis to identify cause and effect on the molecular level. It occurred to Reineccius that these doctors were looking at the same types of molecules that he studied in relation to flavor and aroma.

“I thought, ‘They’re investing billions of dollars in medicine, just for us!'” Reineccius says, laughing. “I figured we could link all of these chemical components in food to aroma, to flavor…we could use these tools they had created to identify the drivers of perception, the compounds in food that indicate ‘cooked’ or ‘salty’.”

Flavoromics uses the same high-throughput data collection and tools as metabolomics to separate and identify thousands of compounds in food and then statistically associate those compounds with changes in flavor perception. The process wasn’t initially accepted by the scientific community—Reineccius’ first flavoromics paper was rejected—since the approach is basically the opposite of conventional flavor research.

The food industry traditionally solves flavor questions empirically, Reineccius says. When they encounter an odd flavor problem, they try empirical solutions until something works, and move on. If a processor wants to reduce sugar in its foods, it isolates sweet-tasting things, but it has no techniques to register compounds that enhance sweetness, or textures, or smells that are perceived as less bitter.

“The tremendous power of flavoromics is that it gives us tools to find things that we have no other way to find except serendipity,” Reineccius says. “It’s not easy or straightforward, because we’re establishing statistical correlations between compounds and sensations. It doesn’t always mean they’re related, but at least we have a tool to start narrowing it down. Serendipity’s a tough way to go about life.”