Twenty-four faculty members from colleges and universities from around the country left the Yale campus on Aug. 1 with a new mission: to inspire their freshman and sophomore students to pursue scientific research, specifically by discovering new antibiotics from soil bacteria.

In a week-long workshop called “The Small World Initiative” and held at Kline Biology Tower, the teachers developed the tools to engage their students in real-life research projects with such life-saving potential.

The teachers collaborated on designing a full range of courses, which — when implemented at their home institutions — will teach students the principles of introductory biology through research projects that examine antibiotic-producing microbes obtained from soil. About 75% of antibiotics in current use originate from soil bacteria, according to the Small World Initiative website. 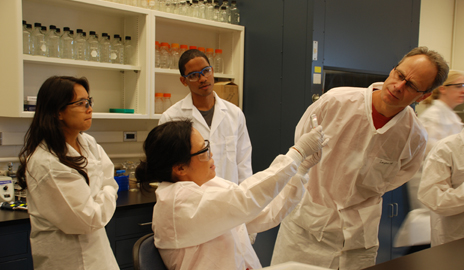 Sachie Etherington from the University of Hawaii at Manoa holds up the results of her culture to the group. She is one of 24 participants of the Small World Initiative at Yale, which draws educators from 24 institutions across the country to develop a series of undergraduate research courses in antibiotic discovery. (Photo by Rachel Lipstein)

The pilot program, facilitated by Yale postdoctoral associate Tiffany Tsang, helps to create coursework that allows undergraduate science and non-science majors alike a taste of real-world research.  This opportunity is not traditionally available during freshman and sophomore years.

The initial roll-out, in Fall ’13, begins with four courses for faculty to implement at their own institutions. The courses are meant to give teachers flexibility in their design.

“It’s a great opportunity to build curricula with colleagues,” said Jean Schmidt from the University of Pittsburgh of the pilot program.

A full launch of all 25 antibiotic discovery introductory research courses — all designed by the Small World Initiative with input from participating teachers — is slated for the Spring 2014 semester, to universities from every corner of the globe.

Eric Warrick from the State College of Florida and Neil Enis from Tulsa Community College — both attendees in this year’s pilot program —note that this is a unique opportunity for their students to participate in authentic scientific research, not typically available to students at two-year institutions such as theirs.

Other teachers said they hoped to expand STEM programs at their schools.

Tsang plans to expand the program to 25 courses, which will be offered to a broader range of institutions around the world.  “The more people we have looking for new antibiotics, the more likely we are to find some,” she says.