The Right to Vote

A lot is up for grabs this November in America—the presidency of the United States, for one. Not to mention a third of U.S. Senate seats, all seats in the U.S. House, and state-level amendments on issues ranging from voter ID to same-sex marriage (Minnesota has both on the ballot).

But almost six million Americans will sit this one out because of something they’ve done. They’re felons—perpetrators, at some point in their lives, of a serious crime.

U of M criminologist Christopher Uggen has spent more than two decades examining the role of the criminal in society. His latest research, released this past July with U of M doctoral student Sarah Shannon and Jeff Manza of New York University, quantified what the landscape looks like going into November. From the map below, it’s pretty clear that something strange is happening. 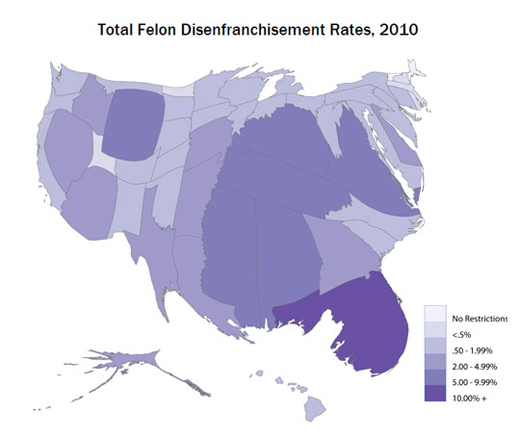 About the image: The cartogram above distorts the land area on the map according to total felon disenfranchisement. States that disenfranchise hundreds of thousands of former felons, such as Florida, Kentucky, and Virginia, appear bloated. Image credit: University of Minnesota. View the full report (PDF).

Some interesting findings of Uggen’s study: Florida (population, 19 million)—one of the so-called key battleground states in this and past elections—has the highest rate of what’s called “felon disenfranchisement” in the nation. Almost 10 percent of voting-age adults cannot vote—1.3 million Floridians.

Law(s) of the land

The United States incarcerates more of its citizens than another other nation in the world, but states make their own laws when it comes to who votes based on criminal history. The most liberal laws, in Maine and Vermont, allow inmates to vote from prison. On the opposite end of the spectrum, 11 states deny inmates, parolees, probationers, and certain ex-felons the right to vote—for life. Thirteen states deny inmates only. Interestingly, it is this latter model that the majority of Americans believe should be policy, says Uggen.

Uggen and Manza’s 2006 book, “Locked Out…” included the first public opinion poll ever on the issue. It turns out that 80 percent of Americans actually support re-enfranchising those who have completed their sentences, while 68 percent support rights for probationers, and 60 percent for those on parole. The 34 states that disenfranchise parolees and the 30 that deny probationers therefore do so at odds with public opinion, says Uggen.

“Survey data show a pretty clear line if we use the American public as a marker,” says Uggen. He says that data, combined with the history of the laws rooted in state constitutions and the period after the Civil War, and the great inconsistency in application, has led him to take a policy stance on the issue.

“What I suggest is, ‘when you’re out, you’re out, and when you’re in, you’re in. It’s a compromise position that I think a lot of people could live with—both policy makers and the public.'”

In the meantime for this coming election, about 45 percent or 2.6 million people who have completed their sentences, but who reside in one of the 11 states that disenfranchise people post-sentence, will not vote.

First-year U of M sociology graduate student Rob Stewart counts himself, reluctantly, among those without a say at the ballot box. He grew up in Owatonna, an hour south of Minneapolis. He went to college out of high school, quit after a couple years and began working as a bartender. 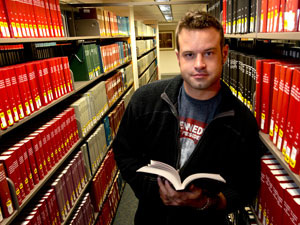 First-year sociology graduate student Rob Stewart will not vote in 2012. He regains the right in October of 2015. Image credit: University of Minnesota

“I was making a lot of money. I decided I’d rather party than go to school, and that was it,” he says.

In 2007, Stewart was arrested for a serious drug offense. He was sentenced to 100 months in prison for his crime, served 25 by going through an early release boot-camp program, and is now on supervision. He regains the right to vote, he says, on Oct. 21 of 2015.

“I committed a crime,” says Stewart. “That doesn’t mean I’m not contributing to society now.”

The criminal in society

Once a criminal, always a criminal is a cliché, but it’s a real perception and one that’s hard to shake, both Uggen and Stewart agree. The thing is, says Uggen, “It’s just scientifically wrong. Individuals commit crime at different points in their lives. Policy has to account for that.”

But Uggen, who has consulted with states on early release when budgets get crunched, says voter disenfranchisement is a different issue.

“Finding 1,000 people for early release—that keeps me up at night. I can run data a million ways, but that scares me, to pull a policy lever. In contrast, voting is a relatively low-risk way to send a powerful symbolic message of inclusion…the risk is that they might not vote in a way that you like. If you expand the electorate, you’re not putting a community at any greater risk of a violent crime occurring,” he says.

His thoughts on the laws?

“As far as disenfranchisement for a person not in prison? I guess I don’t understand them. I’m out of prison, volunteering in the community, paying taxes, doing all those things—but then to turn around and have no say in the way any of those taxes are spent or the way the government is run or even what becomes a constitutional amendment. Voting is the ultimate—that’s what makes this country what it is—one of those…one of those inalienable rights that we have.”

Uggen says that he has no illusion that the nearly six million people without the right to vote this election are, as he says, “warm and cuddly criminals.”

“It’s more that we look at them and judge them by the very worst thing they did in their lives. I ask my students in my classes—take 30 seconds and think of the worst thing in your life you’ve ever done. Now imagine that defines you. The essence of it to me is this notion of inclusion and exclusion. At what point does the person convicted of a crime get that back?”