Workshop helps to define the human right to benefit from science

Yes, says the University of Delaware’s Tom Powers, the international community has declared that there is an inalienable human right to science.

In 1948, the United Nations adopted the Universal Declaration of Human Rights, which guarantees in Article 27 “the right freely to participate in the cultural life of the community, to enjoy the arts and to share in scientific advancement and its benefits.”

The same right was reaffirmed by the U.N. General Assembly in Article 15 of the International Covenant on Economic, Social and Cultural Rights in 1966.

Now an international effort, led by the American Association for the Advancement of Science (AAAS), is under way to bring greater clarity to the meaning of the right and to determine how best to implement the right in practice.

Powers, assistant professor of philosophy who directs UD’s Center for Science, Ethics and Public Policy (SEPP), has been involved in the debate over the past year.

“I’ve been participating in meetings and discussions of the AAAS Science and Human Rights Coalition,” Powers says. “This is the group that’s been charged with conceptualizing the right and figuring out how it might be implemented through governments around the world.”

AAAS has initiated a process to involve various scholarly communities to help define and clarify the right to science, and the American Philosophical Association (APA) — with its national office on the UD campus — represents one of those communities.

The two groups enlisted Powers’ help to pull together a workshop involving philosophers from around the nation last spring. He worked with Jessica Wyndham of AAAS to organize the workshop. The UD Department of Philosophy also co-sponsored the workshop. 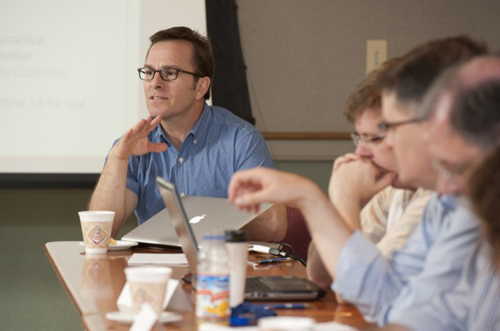 UD's Tom Powers of the Center for Science, Ethics and Public Policy (in blue shirt) has been involved in the debate over the right to science. Photo by Kathy F. Atkinson

The one-day event brought together legal philosophers and ethicists at UD’s Delaware Biotechnology Institute in Newark to consider the role of science and engineering in improving living conditions in the developing world as well as at home in the U.S. Questions ranged from the freedom of scientists to pursue their own lines of inquiry to the impact on intellectual property rights.

During the workshop, the invited participants from the philosophical community mingled with UD scientists and engineers, several of whom have made significant efforts to bring the benefits of science to the developing world.

“The local scientists and engineers formed a kind of advisory group to the philosophers at the workshop, a kind of reality check for our discussion of some pretty lofty ideals and goals,” Powers said.

Basic tenets of the right to science include ensuring equitable access to the benefits of scientific progress, with particular focus on vulnerable and marginalized groups; investing in research and development and creating incentives for innovation to address forms of suffering experienced by these groups; ensuring the freedom of scientists to engage in scientific inquiry while also conducting their work responsibly; and fostering international cooperation in science.

The morning session of the workshop featured a roundtable discussion of these tenets and their practical application, while the afternoon session involved a focus group that followed a standard protocol used by other scholarly communities providing input to AAAS.

AAAS will compile the results of this and other focus groups and relay them to the international human rights community through the United Nations. 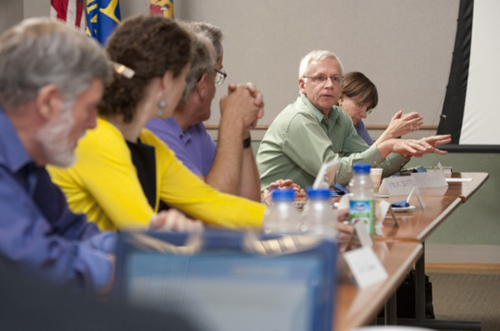 UD's Doug Buttrey (in green shirt) addresses a group during a workshop to clarify the human right to benefit from science and its applications. Photo by Kathy F. Atkinson

“We shouldn’t think of scientific advancement as something that we provide or bestow upon other people,” said one of the UD participants, Doug Buttrey, professor of chemical and biomolecular engineering. “Instead, we should enable the citizens of developing countries to participate in scientific inquiry. The most important thing we can do is to teach people in those countries how to be professors — how to teach and do research — because they will then be able to work on their own problems and needs and spread the benefits of science among their own people.”

For the past five years, Buttrey has devoted part of his time to teaching at the African University of Science and Technology in Abuja, the capital of Nigeria. He is one of 80 science and engineering professors from around the world doing work at the university, the first of five institutions being developed in sub-Saharan Africa under the auspices of the Nelson Mandela Institution (NMI Inc.), with financial support from the World Bank. 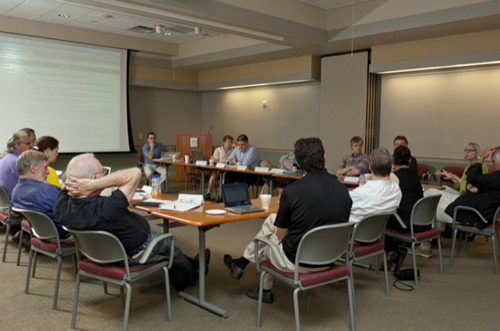 Participants gather at UD for a workshop to clarify the human right to benefit from science and its applications. Photo by Kathy F. Atkinson

Powers hopes to continue working with the AAAS Science and Human Rights Coalition in their future endeavors. Those plans include future meetings and a collection of papers in a special edition of Science and Engineering Ethics.

“The right to enjoy the benefits of scientific progress and its applications has been recognized in binding international treaties for over 60 years. However, unlike the rights to a fair trial or freedom of expression, for example, this right has been largely ignored. Giving meaning to the right to science and seeing it applied in practice is vital to ensuring all peoples have access to the knowledge, the products, the technologies necessary to lead a dignified life and that the scientific endeavor is fostered and allowed to thrive,” said Wyndham.