The power of counteroffers

Whether you are interviewing for a job or closing on a home, power is a central tool in negotiations. Research from professors of management John Sawyer and Dustin Sleesman at the University of Delaware’s Alfred Lerner College of Business and Economics shows that an alternative offer can shift the power dynamic in a negotiation, even if that alternative hasn’t actually been offered.

Their article, “The power of phantom alternatives in negotiation: How what could be haunts what is,” was co-written by Robin L. Pinkley, Don Vandewalle and Maribeth Kuenzi from Southern Methodist University and Donald E. Conlon from Michigan State University and recently published in the journal Organizational Behavior and Human Decision Processes. The article explores the effects that a “certain” versus “phantom” best alternative to a negotiated agreement (BATNA) can have on negotiations. The study won the award for “best paper” at the prestigious Academy of Management research conference prior to publication. 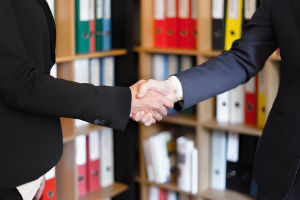 A “certain” BATNA is when the availability of an alternate offer is known. In the example above, this means that Company B has offered you a job. Your alternative offer, or BATNA, is known and certain.

With a “phantom” BATNA, however, the negotiator has not received an alternative offer. In the above example, maybe you had an interview with Company B and, although they haven’t given you a definite offer, they might in the future. That possible alternative offer, or BATNA, may come through as an offer later, but it is uncertain at the time of your interview with Company A.

Previous research has assumed that in a negotiation, people either have or do not have a BATNA. This new research explores that grey area in between to discover, in the case of a phantom BATNA, what power an uncertain alternative offer can have in a negotiation.

“I think this study falls within a broader scope of just being aware and thinking about how the context of the negotiation affects the negotiation itself,” Sawyer said. “We teach people to analyze their position in a negotiation. Part of that analysis is understanding what the alternatives are and how they contribute to your power. Negotiation is not just about ‘what I’m negotiating with you over’ but also ‘what alternatives there are.’ Basically, what is the context?”

Sleesman  said he agreed that people must think through the context of the negotiation.

“I teach this idea when it comes to approaching questions that you may be asked during a negotiation,” Sleesman said. “Your counterpart may try to discern how much power you have by asking if you have a good alternative to their offer. As soon as you say, ‘I don’t have any other offers,’ you give away power. By stating that you might be receiving an alternative in the near future, you both answer honestly and preserve negotiating power.”

“Both ‘phantom’ BATNA holders and their opponents appear to integrate this information into their perceptions of power, offer behavior and negotiated agreements in irrational ways, in that they are inconsistent with the expected utility model,” wrote the researchers.

The expected utility model suggests that the value of any alternative should be based on the likelihood of it coming to fruition. In our example above, this would mean that the alternative offer from Company B could be worth $10,000. With only a 10% probability of actually receiving the offer, it would have a true value of $1,000. However, this research shows that the person potentially receiving the offer perceives it as more valuable and will represent the offer, or phantom BATNA, accordingly in negotiations.

This research has valuable applications in situations ranging from job interviews to contract negotiations. Mentioning a BATNA, even if it is a phantom BATNA, in negotiations can lead to increased power and better counter-offers. However, because negotiators with a phantom BATNA are likely to develop an unrealistic sense of confidence, it is important to consider the realistic probability of receiving the offer when negotiating so as not to lose the best offer. Sawyer and Sleesman also caution that negotiators should be realistic and honest when mentioning phantom BATNAs for ethical and reputational reasons.

“The implication for people who negotiate for a living, for example a real estate broker in buying and selling, is that if they know more about how contextual things affect a negotiator’s power, then they know how to diffuse that as well,” Sawyer said. “They can ask a negotiator how likely an alternative offer actually is and then probe on that offer. This will push back against the other person’s power and give them more power in offering a sure thing versus the possible alternative offer they have.”

The implication is that if your counterpart mentions that they have a phantom BATNA, you should question the certainty that the alternative will come to fruition. This can help ground both people in reality and make the negotiation more realistic. This research makes it clear that, regardless of what side of the negotiation you are on, phantom BATNAs can indeed come to haunt you.