The Making of Antarctica’s Hidden Fjords

Antarctica’s topography began changing from flat to fjord-filled starting about 34 million years ago, according to a new report from a University of Arizona-led team of geoscientists.

Knowing when Antarctica’s topography started shifting from a flat landscape to one with glaciers, fjords and mountains is important for modeling how the Antarctic ice sheet affects global climate and sea-level rise.

Although radar surveys have revealed a rugged alpine landscape under Antarctica’s two-mile-thick ice sheet, the surveys tell nothing about when the continent’s deep valleys formed.

“We have worked out how the landscape under the ice has changed through time,” said lead author Stuart N. Thomson.

“People have speculated when the big fjords formed under the ice,” he said. “But no one knows for sure until you sample the rocks or the sediments.” 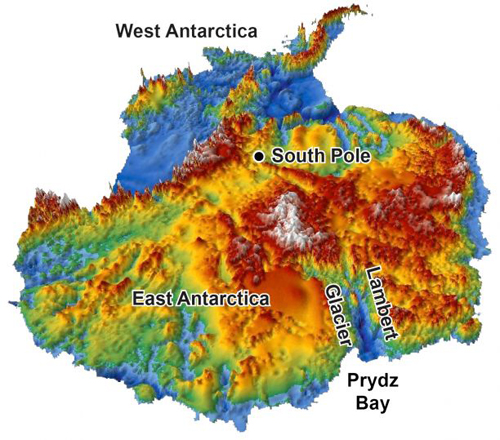 This 3-D reconstruction of the topography hidden under Antarctica’s two-mile-thick coating of ice was made using data from radar surveys. Glaciers started carving Antarctica into the current mountain-and-fjord landscape 34 million years ago, according to new findings from UA geoscientist Stuart N. Thomson and his colleagues. (Image courtesy of Stuart N. Thomson/UA department of geosciences)

He and his colleagues sampled East Antarctica’s rocks by examining the sediments that built up off-shore for millions of years as rocks and dirt eroded off the continent into Prydz Bay.

“We use the sediments to trace what was happening under the ice in the past,” said Thomson, a research scientist in the UA department of geosciences.

The team found that between 250 and 34 million years ago, erosion from the region now covered by the huge Lambert Glacier was slow, suggesting the area was relatively flat and drained by slow-moving rivers.

About 34 million years ago, at the same time the climate shifted and Antarctica was becoming covered with ice, the rate of erosion more than doubled, Thomson said.

“The only way that could happen is from glaciers,” he said. “They started grinding and forming deep valleys.”

“Glaciers can carve deep valleys quickly – and did so on Antarctica before it got so cold that the most of it got covered by one or two miles of thick, stationary ice.” 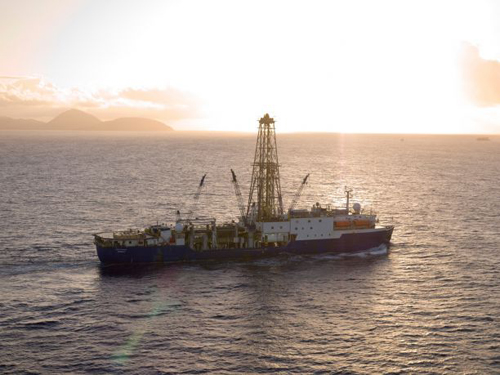 The team’s paper, “The contribution of glacial erosion to shaping the hidden landscape of East Antarctica,” is published in the March issue of Nature Geoscience.

Geologists generally figure out a landscape’s history by hiking around to look at the area’s rocks and then toting some of them back to the lab for analysis.

“The trouble is, in Antarctica, 97 percent of the continent is covered in ice, and you can’t directly access the rocks,” Thomson said.

To reconstruct the history of East Antarctica’s landscape, he and his colleagues instead studied bits of Antarctic rocks from cores of sediment taken just offshore of the Lambert Glacier by the Ocean Drilling Program.

The team used 1,400 individual sand-sized grains of minerals from various locations throughout three different cores to figure out how quickly the surface of Antarctica had eroded at various times in the past.

Because other researchers had used microfossils to pinpoint when in geological time each layer of the core had been deposited, Thomson and his colleagues knew when each of those 1,400 samples had been washed from Antarctica’s surface into the sea.

To link a time in the landscape’s history to an erosion rate, geologists can use the “cooling age” of rocks. The cooling age tells how fast the rock was uncovered from a particular depth in the Earth.

As a rock is moved deeper into the Earth, it warms, and as it moves toward the surface of the Earth, it cools. A particular depth in the Earth corresponds to a particular temperature. Minerals in the rock, apatite and zircon, record when they were last at a certain depth/temperature.

The different methods of analysis all point to the same answer. 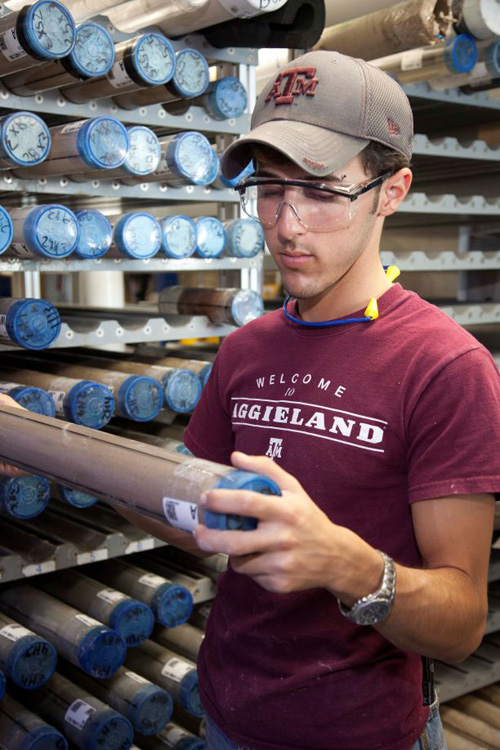 Marine technician Ty Cobb examines a sediment core on board the drillship JOIDES Resolution. During an expedition, researchers collect samples of rock and sediment from beneath the seafloor. The 9.5 meters of core are cut into sections (about 1.5 meters) for shipboard and shore-based sampling. After an expedition, the cores are available for researchers worldwide. The Gulf Coast Repository at Texas A&M is one of three repositories worldwide that houses cores from more than 40 years of scientific ocean drilling. (Photo credit: IODP/TAMU)

Knowing how the ice sheets changes in the past is important for predicting future changes in ice sheet growth, sea-level change and climate, Thomson said.

His next step is looking offshore in other regions of Antarctica to see if they show the same pattern.