The flip of a single molecular switch helps create the mature neuronal connections that allow the brain to bridge the gap between adolescent impressionability and adult stability. Now Yale School of Medicine researchers have reversed the process, recreating a youthful brain that facilitated both learning and healing in the adult mouse.

Scientists have long known that the young and old brains are very different. Adolescent brains are more malleable or plastic, which allows them to learn languages more quickly than adults and speeds recovery from brain injuries. The comparative rigidity of the adult brain results in part from the function of a single gene that slows the rapid change in synaptic connections between neurons. 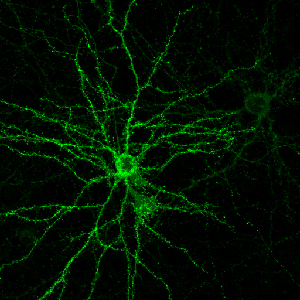 “These are the molecules the brain needs for the transition from adolescence to adulthood,” said Dr. Stephen Strittmatter. Vincent Coates Professor of Neurology, Professor of Neurobiology and senior author of the paper. “It suggests we can turn back the clock in the adult brain and recover from trauma the way kids recover.”

Rehabilitation after brain injuries like strokes requires that patients re-learn tasks such as moving a hand. Researchers found that adult mice lacking Nogo Receptor recovered from injury as quickly as adolescent mice and mastered new, complex motor tasks more quickly than adults with the receptor.

“This raises the potential that manipulating Nogo Receptor in humans might accelerate and magnify rehabilitation after brain injuries like strokes,” said Feras Akbik, Yale doctoral student who is first author of the study. 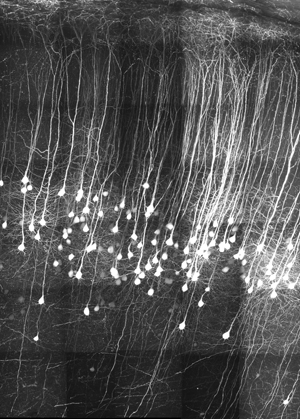 A 3-D reconstruction of neurons in the somatosensory cortex. Image credit: Yale University

“We know a lot about the early development of the brain,” Strittmatter said, “But we know amazingly little about what happens in the brain during late adolescence.”

The study was funded by the National Institutes of Health. Strittmatter is scientific founder of Axerion Therapeutics, which is investigating applications of Nogo research to repair spinal cord damage.