The GOP Has a Feminine Face, UCLA Study Finds

At least when it comes to female politicians, perhaps you can judge a book by its cover, suggest two UCLA researchers who looked at facial features and political stances in the U.S. House of Representatives.

The researchers also found the opposite to be true: Female politicians with less stereotypically feminine facial features were more likely to be Democrats, and the more liberal their voting record, the greater the distance the politician’s appearance strayed from stereotypical gender norms.

In fact, the relationship is so strong that politically uninformed undergraduates were able to determine the political affiliation of the representatives with an overall accuracy rate that exceeded chance, and the accuracy of those predications increased in direct relation to the lawmaker’s proximity to feminine norms. 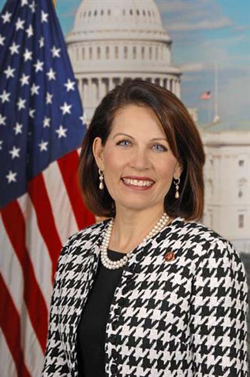 “I suppose we could call it the ‘Michele Bachmann effect,'” said Kerri Johnson, the study’s senior author and an assistant professor of communication studies and psychology at UCLA.

The findings are forthcoming online in the peer-reviewed Journal of Experimental Social Psychology.

The work was inspired by prior research that has shown that Americans have a better-than-chance ability to determine whether someone is a Democrat or a Republican on the basis of appearance alone. The mechanism behind these judgments, however, is not well understood.

“At least when it comes to female politicians, assessing how much a face reflects gender norms may be one way of guessing political affiliations,” said Johnson.

In addition, the findings contribute to a growing body of evidence that suggest that voters may use shortcuts in forming impressions of political candidates.

Carpinella and Johnson focused on the House of Representatives because the body was large enough to yield statistically valid results and its members would not be as easily recognized by study subjects as members of more high-profile political bodies, such as the U.S. Senate.

They started the project by feeding portraits of 434 members of the 111th House of Representatives into a computer modeling program used by researchers in their field. Loaded with a database of hundreds of scans of faces of men and women, the FaceGen Modeler allows researchers to measure how much the details of any one face approach the average for either gender.

The model compared each representative’s face to the norm on more than 100 subtle dimensions, including the shape of the jaw, the location of eyebrows, the placement of cheek bones, the shape of eyes, the contour of the forehead, the fullness of the lips and the distance between such features as the bottom of the nose and the top of the lip. Armed with these dimensions, the researchers were able to arrive at an amalgamated score assessing the extent to which the face exhibited characteristics common to men or to women. Theoretical values ranged from -40 (highly male-typed) to +40 (highly female-typed).

“We weren’t looking at hairstyle, jewelry or whether a person was wearing make up or not,” Carpinella said. “We wanted to get an objective measure of how masculine or feminine a face is, based on a scientifically derived average for male or female appearance.”

In addition to party affiliation, the researchers took into account each politician’s DW–NOMINATE score, a scale developed by political scientists that uses voting records to determine how conservative or liberal a lawmaker is.

Because the GOP is more frequently associated with policies that uphold traditional sex roles, the researchers expected to find that Republican representatives of both sexes would have more sex-typical faces than their counterparts across the aisle. The theory, however, did not hold for male politicians. In a finding that the researchers do not view as a particularly revealing, the faces of male Republicans, on average, scored as less masculine than the faces of their Democratic counterparts.

“It may be unnecessary for Republican men to exhibit masculinity through their appearance,” Carpinella said. “Their policy advocacy and leadership roles may already confer these characteristics on them.”

But a telling difference emerged among female politicians. The faces of Republican women rated, on average, twice as sex-typical — or feminine — as those of Democratic women. And among conservative lawmakers of both genders, women were 13 points more feminine on average than men were masculine. Among more liberal politicians, women were five points more feminine than men were masculine.

Additional research is required to understand the roots of the GOP’s more feminine face when compared with the Democratic Party, but the researchers believe that branding plays a role.

“The Democratic Party is associated with social liberal policies that aim to diminish gender disparities, whereas the Republican Party is associated with socially conservative policy issues that tend to bolster traditional sex roles,” Johnson said. “These policy platforms are manifest in each party’s image — apparently also in the physical characteristics exhibited by politicians.”

Party leadership may play a role in promoting and electing candidates who display physical characteristics that reflect party values, but research is needed to determine whether this is the case and to understand the means being employed, the researchers said.

Whatever their origins, expectations of displays of femininity can be problematic for female professionals because past research has demonstrated that people tend to view women as either competent or feminine — not both.

“We suspect that conservative constituents demand that their politicians be not just competent but also gender-typical, especially among women,” Johnson said. “As a result, we think these women may find themselves in a double bind.”

The research is part of a burgeoning new field in the social sciences called “social vision,” which is dedicated to understanding how others are perceived based on subtle visual cues. The field has implications for prejudice-formation and understanding stereotyping, as well as for generally understanding human experience. Johnson’s past research has looked at subtle cues in body type and motion that serve as cues to sexual orientation.

The researchers next plan to look at how the gendered nature of a politician’s appearance may relate to the judgments of political competence and to real-world political success once elected to office.

“With the increasing emphasis on television and Internet video as a source of political news, a candidate’s physical appearance is an important part of politics, especially political campaigns,” Johnson said. “A considerable portion of the electorate may not be well-informed, and they may be making decisions based on subtle cues that need to be revealed and understood.”