Surface-dwelling algae adjust their biochemistry to surface temperatures. As they die and sink to the bottom, they build a sedimentary record of sea-surface temperature across millennia. Brown’s work on surface temperatures, coupled with work from Texas A&M on rainfall and weather patterns, has helped chart the wetter, lake-filled geological history of the currently arid American West.

During the last ice age, the landscape of the American West was very different. Where now there are deserts and salt flats in the Southwest and Great Basin regions, there once were giant lakes and wetlands. The Great Salt Lake, for example, is a tiny remnant of the prehistoric Lake Bonneville, which at one time covered almost 20,000 square miles. 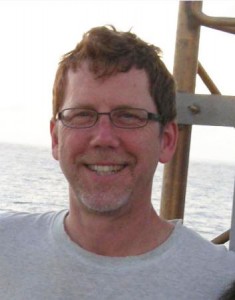 Tim Herbert. “What we’re learning is that changing one thing in the climate system changes something else that maybe we weren’t expecting.” Image credit: Brown University

Now, a team of environmental scientists and geologists has found that the water that filled those ancient lakes probably came from an unexpected source. During the last ice age, powerful spring and summer storms poured into the region from the tropical Pacific, a system that contributes almost no moisture to the region today. As the glaciers receded, that moisture source was cut off and the lakes eventually dried.

The findings, published Thursday, Sept. 27, 2012, in the journal Science, paint a new picture of how rainfall patterns in the American West changed over the last 20,000 years, and underscore the unanticipated ways in which climate change can alter rainfall, the researchers say.

How does this study change what we know about the climate history of the Southwest and Great Basin?

Geologists had already known that it was wetter in the region 20,000 years ago and then dried out. We’re looking more at why it happened, and this is a new explanation. The traditional hypothesis was that these old lakes were supplied with water from westerly storms. The way things are set up today, there’s a big area of high-pressure circulation over the eastern tropical pacific, and a big area of low pressure in the Gulf of Alaska. Storm tracks come off the low-pressure area, and that’s what keeps Oregon, Washington State, and British Columbia wet. Every now and then, the tracks move south a bit, and you get rain in California. The high pressure is why you have deserts and an arid Mediterranean climate over most of southern California.

During the last glacial period, that low pressure would have been further south because colder air had pushed these climate systems toward the equator. That probably made rainfall in southern California more like Washington State is today. It was assumed that moisture from those westerly storms also filled the ancient lakes in the interior Southwest and Great Basin. But what our collaborators were able to pull together very nicely is that while that scenario may explain the rainfall history for southern California, it doesn’t say much about the interior part of the country. We show that even after the low pressure had migrated north and southern California was dry, the Great Basin and Southwest were still wet. The westerly storms aren’t really working as an explanation, so we’ve got to look for a moisture source from the south, which was unanticipated.

What role did your work play in this?

The movement of those high- and low-pressure systems is related to temperatures in the ocean. The temperature data was generated here at Brown. Ocean temperatures more or less allow you to track the westerly storms through time, and then you can compare that with pollen and other data that tell us about climate conditions on land. In this case, the westerlies didn’t explain the patterns in the interior.

How are you able to reconstruct ancient ocean temperatures?

The layers on sea floor have accumulated over time by stuff sinking down from the surface, so we can learn about surface conditions in the past by looking at those layers. The idea is if you jab a tube into the mud and analyze what comes up, you can reconstruct conditions through time. In this case, we can measure time by using carbon-14 dating, so we know pretty well the age we’re dealing with.

We take samples in depths of water that would be on the order of hundreds of meters to a few kilometers below sea level. It’s relatively quiet water, where we don’t have storms and stuff ripping up sediment and moving it around. You have to do this where most of the pages of the book are still there, not where somebody has ripped them all out.

What are you looking for in that mud that gives an indication of past temperatures?

We’ve taken advantage of one of those serendipitous discoveries. We look at the chemical remains of a couple of species of algae that commonly grow on the surface of the ocean. These particular species produce a lipid molecule that comes in two varieties, which turn out to be temperature-sensitive. The algae adjust the amount of molecule-A compared to molecule-B based on the temperature of the water. Thousands of years later we can bring up this sediment, analyze it chemically, and reconstruct the surface temperature based on the ratio of the two lipid molecules.

It was something that was discovered by accident. Nobody sat there and in a moment of genius said, “I’ll bet there are biological molecules that adjust perfectly to temperature.” But you can actually make these organisms do this in the lab when you crank up the heat of their water. The good news for us is we can find this stuff in the mud. As long as we know what the age of the sediment is, we can tell you the past temperature very accurately.

Besides a new rainfall model in the American West, what’s the takeaway from this work?

The ice age is a natural experiment in tweaking the dials of the climate system. This article looks at the relationship between temperature patterns and rainfall, which is the most complicated part of the climate system. Our climate models do a very good job of simulating global temperature, but the relationship to rainfall is more difficult. These results give us a sense that we’re not as far along as we’d like to be in understanding rainfall. At the same time, they also provide hope that these regional temperature studies related to rainfall will help unlock a little more of that puzzle.