The First Spectroscopic Measurement of an Anti-Atom

*Berkeley Lab scientists helped build and operate the ALPHA antimatter trap at CERN, which has now probed the internal structure of the antihydrogen atom for the first time, taking the first step toward possible new insights into the difference between matter and antimatter*

The ALPHA collaboration at CERN in Geneva has scored another coup on the antimatter front by performing the first-ever spectroscopic measurements of the internal state of the antihydrogen atom. Their results are reported in a forthcoming issue of Nature and are now online.

Ordinary hydrogen atoms are the most plentiful in the universe, and also the simplest – so simple, in fact, that some of the most fundamental physical constants have been discovered by measuring the tiny energy shifts resulting from the magnetic and electric interactions of hydrogen’s proton nucleus with its single orbiting electron.

Antihydrogen, on the other hand, is rare, with single positrons (antielectrons) orbiting single antiprotons – difficult to make, and even more difficult to hold onto. Indeed antihydrogen had never been trapped until ALPHA succeeded in doing so in 2010.

In a recent series of trials, the ALPHA researchers created and captured hundreds of antihydrogen atoms in a magnetic bottle, then probed their internal states by bathing them in microwave radiation that flipped the spins of the positrons, causing the immediate ejection of the atoms from the magnetic trap and their annihilation on the trap wall. 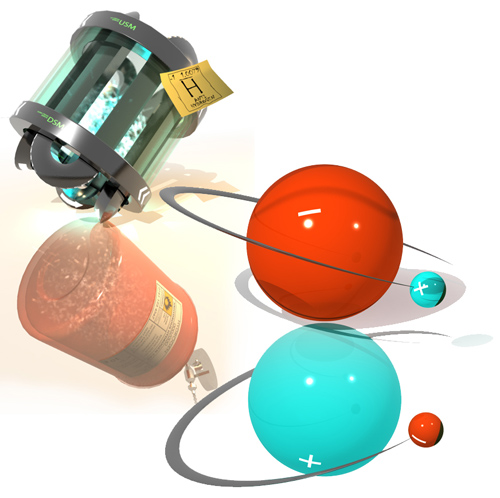 Like ordinary hydrogen, a single electron orbiting a proton nucleus, antihydrogen is the simplest of atoms, a single positron (antielectron) orbiting a single antiproton. CERN’s ALPHA experiment was first to trap antihydrogen in a magnetic bottle, using a superconducting octupole magnet. (Images by Chukman So, copyright © 2011 Wurtele Research Group. All rights reserved.)

Neither electrons nor positrons really spin, of course. “Spin” is the name for an internal quantum state of some particles and has just two values, up and down. In hydrogen, the interaction of the spin states of the electron and proton splits the ground state (the atom’s lowest energy) and is known as hyperfine splitting; in astronomy, hyperfine splitting is the source of the signature 21-centimeter emission line of hydrogen.

Antihydrogen should behave the same way, and the frequency of the microwave radiation required to flip its spins thus provides a direct measure of the difference in energy between the two hyperfine states of antihydrogen.

“To measure the hyperfine structure of antihydrogen we tune the frequency of the microwaves,” says Jonathan Wurtele, a member of the Accelerator and Fusion Research Division (AFRD) at the U.S. Department of Energy’s Lawrence Berkeley National Laboratory (Berkeley Lab), a professor of physics at the University of California at Berkeley, and a long-time member of the ALPHA collaboration. As of now the measure is imprecise, because the size of the energy difference depends on the magnitude of the magnetic field in ALPHA’s antihydrogen trap, but Wurtele says, “Our newest experimental apparatus is already under construction, and these initial experiments indicate that we’ll soon have the techniques to make precise measurements.”

How to catch an anti-atom

Berkeley Lab scientists played key roles in designing and modeling ALPHA’s Minimum Magnetic Field Trap, a magnetic bottle created by superconducting magnets whose fields capture and hold antihydrogen atoms. Although electrically neutral, the separation of the anti-atoms’ negatively charged antiprotons and positively charged positrons, plus their spins, gives them a magnetic moment. Thus – as long as they aren’t moving too fast – they are vulnerable to capture by the trap’s magnetic fields.

One advantage of working with antimatter is that it is easy to work with individual atoms, which is not the case for ordinary hydrogen. Joel Fajans, a founding member of ALPHA who is also a member of AFRD and a physics professor at UC Berkeley, explains that if one were trying to capture ordinary hydrogen atoms in a similar trap, “the vacuum in these traps is always contaminated with hydrogen, so how could you distinguish the background hydrogen from the deliberately trapped hydrogen?” 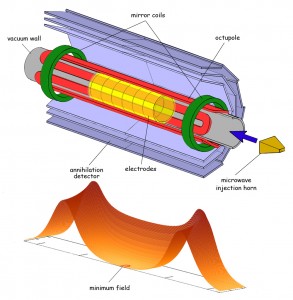 At top, a cutaway schematic of the ALPHA antimatter trap shows the superconducting octupole magnet and mirror magnets and other features. Below is a map of magnetic field strength inside the trap. The goal is to measure the hyperfine structure of antihydrogen atoms at the trap’s center, where the magnetic fields are at minimum strength. Image credit: Berkeley Lab

But, says Fajans, “you can’t trap antihydrogen accidentally; it just doesn’t occur naturally.” Antihydrogen, like all forms of antimatter, can’t co-exist with normal matter because matter and antimatter mutually annihilate in a burst of energy when they come in contact.

The disadvantages of experiments on antihydrogen atoms include trying to insert experimental probes without disturbing the trap’s exquisitely balanced magnetic fields. Over the past months the ALPHA researchers have been able to modify the experiment to introduce microwave radiation into the trap’s interior. In their experiments they used two different methods of gathering data, one dubbed the disappearance method and one the appearance method.

Comparing the results shows that far fewer anti-atoms survive the resonant-frequency tests than in either of the other two conditions, confirming that this is indeed the right frequency to flip their spins and eject the atoms.

The “appearance” test is more direct – the anti-atoms are held in the trap for three minutes, and researchers count each annihilation that results when the microwave flips a spin and the anti-atom escapes the trap.

Large uncertainties remain. Ideally the affected anti-atoms are in the very center of the trap, where the magnetic field is at a minimum. But the field increases in every direction away from the minimum, and the magnet currents are not perfectly known. Field strength affects the resonant frequency, so the researchers have to find ways to measure the precise and accurate strength of the field where each anti-atom is flipped.

Other approaches include measuring energy shifts in the antihydrogen spectrum that are far subtler and more difficult to detect but not affected by magnetic fields. Fajans and Wurtele also look forward to a modification of ALPHA that will allow the trapped anti-atoms to be probed not by microwaves but with a laser beam, which, says Fajans, ”will allow us to measure the energy levels of antihydrogen – effectively we’ll see at what color antihydrogen glows.” Lasers also bring the ability to manipulate individual atoms in special ways, such as cooling them so that they become almost motionless, which permits ever more precise measurements of their properties.

Are matter and antimatter really the same?

“We have every reason to believe that hydrogen and antihydrogen are identical – aside from one being made of matter and the other of antimatter,” Fajans says. “In fact, CPT insists they are identical. But what if they aren’t?”

CPT stands for charge conjugation (C), parity (P), and time reversal (T), a symmetrical state of affairs in which the laws of physics are the same in a world where charges have their signs flipped, right and left are reversed, and time runs backwards.

Violations of charge conjugation and parity have been observed separately, but when the reversible arrow of time is considered, the symmetry of the three together seems to hold. The CPT mirror world would be far from a perfect reflection of ordinary reality, however – perhaps more like a funhouse hall of mirrors – if the atomic spectrum of antihydrogen is not identical to that of ordinary hydrogen.

Should antihydrogen’s spectrum turn out to be different than ordinary hydrogen, the implications range from the miniscule to the cosmic. “If we do find a difference,” says Wurtele, “people will be shocked. But we’ll never know unless we make the measurement.”

The mystery of why there is so much ordinary matter in the universe and so little antimatter has long exercised theorists and experimentalists alike. It’s at least conceivable that part of the answer lies in the spectrum of antihydrogen. If so, the ALPHA collaboration is on the path to finding it.