Emperor penguins may be icons of the Antarctic, but they aren’t immune to disturbances in their environment.

As climatic and other changes unfold, emperors may dwindle in numbers. But how to tell, when researchers can’t access all the emperor colonies dotting the Antarctic ice shelves and count heads every year? 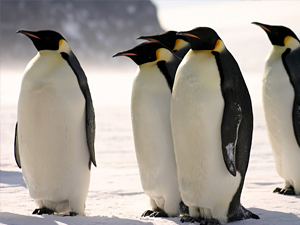 Emperor penguins, which are found only in Antarctica, have just been censused by satellite. Photo: Michelle LaRue

Three researchers at the University of Minnesota’s Polar Geospatial Center, along with several international colleagues, have published (April 13, 2012) the first census of emperor penguins based on satellite images in the journal PLoS One. Among 46 breeding colonies, they counted some 595,000 birds, far more than the 170,000 to 350,000 they had expected.

The census gives researchers a baseline for measuring the health of the species as it relates to changes in the physical environment or human activity, says Michelle LaRue, a research fellow at the center and graduate student in the Conservation Biology Program.

“Now when we want to monitor through time and compare [emperor numbers] to sea temperature, air temperature, or ice cover, we can do that and see population trends globally, not just regionally,” LaRue says. “For example, if the Cape Crozier colony [near McMurdo Station] were crashing and everywhere else was doing fine, we could spot that and study it.”

The data are from satellite surveys in October 2009, when breeding pairs of emperors were congregating on ice shelves. From space, the colonies look like smudges on the ice; the color comes from the penguin poo (guano) that gets spread around. Individual birds can be seen as black dots, but with thousands of dots close together, it’s hard to count them. 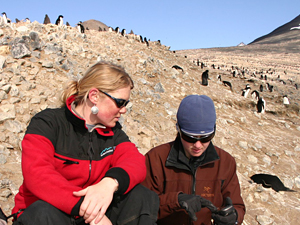 To get around that problem, Claire Porter of the Polar Geospatial Center used a technique called pansharpening to sharpen the color satellite images so individual penguins could be seen.

“Then we did ‘supervised classification,’ where we trained a computer to distinguish ice from penguins from guano in satellite images,” says La Rue. Once congregations of penguins were identified, knowing how much space each bird takes up allowed the team to convert the areas covered into numbers of birds. LaRue and first author Peter Fretwell of the British Antarctic Survey split the work of analyzing the data from the colonies.

How to preserve penguins

If penguins in certain colonies should show, say, a drop in numbers, the first step in helping the birds recover would be to identify the cause of the problem.

For example, “if the population in an entire region is plummeting and everywhere else is doing fine and it could be linked to anthropogenic activities, we could make management suggestions based on research,” LaRue explains. 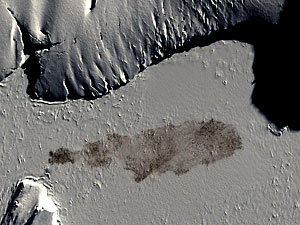 In this satellite image from Digital Globe, the emperor penguin colony at Cape Roget appears as a drumstick-shaped smudge on the ice shelf. Image credit: University of Minnesota

Warming poses a particular threat. Emperor chicks are hatched by the end of October, says LaRue. But if ice breaks up before early December, chicks, which hang together in groups and are helpless in water, may not fledge in time to survive the loss of ice. Also, since emperors don’t breed until the age of 4 or 5, a loss of chicks in one year won’t show up in the breeding colonies for a few more years.

LaRue is looking forward to learning more about the ecology and behavior of emperors. For example, birds in a given colony typically return to the same site each year to breed. However, she says, the birds in a colony that disappeared in 2010 may have turned up in a different spot. Also, a colony on the “tongue” of a glacier that extended into the sea had to move after an iceberg came along and lopped off the tongue. 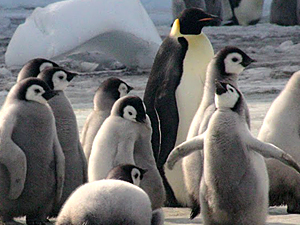 Both the census and the Polar Geospatial Center are supported by the National Science Foundation.