The team consisted of Martin Monti, an assistant professor of psychology and neurosurgery at UCLA, professors Alon Friedman, Galia Avidan and Tzvi Ganel of the Zlotowski Center for Neuroscience at Israel’s Ben-Gurion University of the Negev, and Dr. Ilan Shelef, head of medical imaging at Israel’s Soroka University Medical Center. 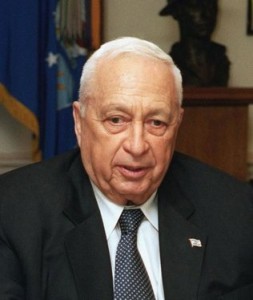 The 84-year-old Sharon, presumed to be in a vegetative state since suffering a brain hemorrhage in 2006, was scanned last week to assess the extent and quality of his brain processing, using methods recently developed by Monti and his colleagues. The test lasted approximately two hours.

The scientists showed Sharon pictures of his family, had him listen to his son’s voice and used tactile stimulation to assess the extent to which his brain responded to external stimuli.

To their surprise, significant brain activity was observed in each test, in specific brain regions, indicating appropriate processing of these stimulations, Monti said.

The scientists conducted three tests to assess Sharon’s level of consciousness. They asked him to imagine he was hitting a tennis ball and to imagine he was walking through the rooms of his home. They also showed him a photograph of a face superimposed on a photo of a house, asking him to focus first on the face and then on the house. The scientists found encouraging, but subtle, signs of consciousness.

“Information from the external world is being transferred to the appropriate parts of Mr. Sharon’s brain. However, the evidence does not as clearly indicate whether Mr. Sharon is consciously perceiving this information,” Monti said. “We found faint brain activity indicating that he was complying with the tasks. He may be minimally conscious, but the results were weak and should be interpreted with caution.”

Tzvi Ganel, who initiated the project, stressed that Sharon’s family wished to employ these new techniques not only for the benefit of the former prime minister but also for other families in a similar situation.