Using an innovative satellite technique, NASA scientists have determined that a previously unmapped type of wildfire in the Amazon rainforest is responsible for destroying several times more forest than has been lost through deforestation in recent years.

END_OF_DOCUMENT_TOKEN_TO_BE_REPLACED

ANN ARBOR — Sea surface temperatures in the tropical South Atlantic Ocean can be used to accurately forecast, by up to four months, malaria epidemics thousands of miles away in northwestern India, a University of Michigan theoretical ecologist and her colleagues have found.

Colder-than-normal July sea surface temperatures in the tropical South Atlantic are linked to both increased monsoon rainfall and malaria epidemics in the arid and semi-arid regions of northwest India, including the vast Thar desert, according to Mercedes Pascual and her colleagues, who summarize their findings in a paper published online March 3 in the journal Nature Climate Change. END_OF_DOCUMENT_TOKEN_TO_BE_REPLACED

END_OF_DOCUMENT_TOKEN_TO_BE_REPLACED

PASADENA, Calif. – An area of the Amazon rainforest twice the size of California continues to suffer from the effects of a megadrought that began in 2005, finds a new NASA-led study. These results, together with observed recurrences of droughts every few years and associated damage to the forests in southern and western Amazonia in the past decade, suggest these rainforests may be showing the first signs of potential large-scale degradation due to climate change.

An international research team led by Sassan Saatchi of NASA’s Jet Propulsion Laboratory, Pasadena, Calif., analyzed more than a decade of satellite microwave radar data collected between 2000 and 2009 over Amazonia. The observations included measurements of rainfall from NASA’s Tropical Rainfall Measuring Mission and measurements of the moisture content and structure of the forest canopy (top layer) from the Seawinds scatterometer on NASA’s QuikScat spacecraft. END_OF_DOCUMENT_TOKEN_TO_BE_REPLACED

END_OF_DOCUMENT_TOKEN_TO_BE_REPLACED 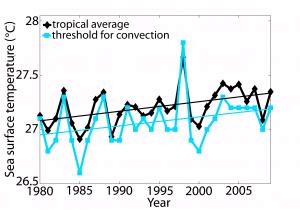 Scientists have long known that atmospheric convection in the form of hurricanes and tropical ocean thunderstorms tends to occur when sea surface temperature rises above a threshold. So how do rising ocean temperatures with global warming affect this threshold?  If the threshold does not rise, it could mean more frequent hurricanes.

A new study by researchers at the International Pacific Research Center (IPRC) of the University of Hawaii at Mānoa shows this threshold sea surface temperature for convection is rising under global warming at the same rate as that of the tropical oceans. Their paper appears in the Advance Online Publications of Nature Geoscience. END_OF_DOCUMENT_TOKEN_TO_BE_REPLACED