Policy-makers have been warned that premature military action in Syria could lead to uncontrolled access to weapons of mass destruction and a prolonged, bitter insurgency following any intervention that resulted in the sudden collapse of the Syrian security forces.

Despite the desire to prevent further bloodshed, taking direct action to try to end the conflict could be the “worst option” and could only serve to further destabilise the situation in the volatile country.

General (Retd) Professor Sir Paul Newton co-wrote the report alongside distinguished Middle Eastern scholars at the University of Exeter’s Strategy and Security Institute, of which he is Director. He said: “Although it may appear attractive in the short-term, the one scenario that must be avoided is sudden, uncontrolled state collapse. This may seem like a paradox given the pressing need to end humanitarian suffering and the risk of the conflict spreading. However, it could be catastrophic. If unmanaged disintegration of the Syrian state were to occur, access to weapons of mass destruction would be uncontrolled.” 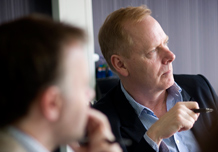 “The Syrian opposition is quoted as saying that it will hold to account those who have ‘blood on their hands’, but after 20 months of conflict that potentially encompasses a large proportion of the population. We’re talking about tens of thousands of soldiers, secret police and officials who will hear an echo from Iraq in 2004 in such phrases and feel isolated and without hope of integration into post-Assad society. They may well feel they are being backed into a corner where they must fight for the Regime rather than contributing to an orderly transition. In the event of ‘catastrophic success’, say following the sort of campaign NATO mounted in Libya, there would be no organisation left with either the intent or capability to protect weapons of mass destruction that are dispersed in numerous sites. Without a clear and pre-emptive assurance of amnesty or a similar guarantee for the vast majority of the Regime’s security apparatus there would also be the prospect of a bitter and protracted insurgent threat in Syria.”

Sir Paul is an Iraq veteran who had a distinguished military career spanning four decades, and was Knighted earlier this year in recognition of his service. He has been involved in strategic military planning and conduct of operations in Afghanistan, Kosovo, East Timor, Northern Ireland and Sierra Leone.

He said it was imperative to convey clear messages to Syria’s security and intelligence forces to offer an alternative path.

The Exeter panel conceded that all options presented their own problems, but the best of those was for UK to continue to play an active diplomatic role while ensuring the UK is not manoeuvred into a military leadership role, either by rhetoric or US disengagement. The panel warned that the UK has neither the resources nor the public support to take the military lead.

Sir Paul and his colleagues warned of the risks of confused and confusing Western strategic messages, and advised UK policy-makers to use their influence with the anti-Assad coalition for an inclusive settlement which could drive a wedge between the very top of the Regime and the bulk of its security forces.