Suzanne Alonzo: A Voice That Says ‘I Think You Can’

At one time or another, however briefly, many of the budding scientists Suzanne Alonzo works with in her laboratory or classroom have experienced a crisis of confidence — or, at the least, a bit of doubt about their academic path.

In these times, the associate professor of ecology and evolutionary biology tries to be a voice of encouragement, even though says she knows she can’t take on her students’ challenges.

Before winning the first prize, Alonzo admits, she was uncertain about whether her own style of mentoring was effective or not, and she didn’t feel able to advise anyone else about how to be a good mentor.

“I don’t think it’s something that you can boil down or teach to someone else,” she says. “For me, it’s really a matter of just paying attention to the individuals in front of you — valuing their education and their experience, the whole package of who they are.” 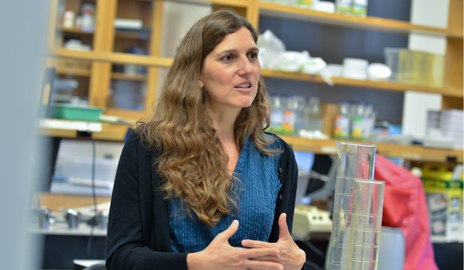 The postdocs who nominated Alonzo for this year’s mentoring prize singled her out for such qualities as “maintaining a nurturing, supportive environment in her lab,” “insisting on the highest standards of mutual respect,” “promot[ing] the careers of her postdocs by providing them with timely feedback on their written work,” helping them “build professional networks with scientists inside and outside of Yale,” and “model[ling] the challenges of family-career balance by protecting her commitments to her family while maintaining a productive academic career.” She was also credited with helping her students understand the larger scientific impact of their basic research. See one of Alonzo’s mentees’ letter of recommendation for the Yale Postdoctoral Mentoring Prize here.

Alonzo, who is noted primarily for her research on the evolution of mating and reproductive behaviors of fishes, says that if she hadn’t had good mentors herself, her own life might have taken a much different course.

“In college at the University of California at Berkeley, I thought I was on a pre-veterinary track,” recalls the Yale faculty member. “I took a course on animal behavior and was smitten. I was just fascinated by it, and followed up with a semester-long field studies course, during which a small group of us and a bunch of professors went to French Polynesia. I thought doing research was fantastic.”

That first foray in the field was to study the territorial behavior of fiddler crabs, and she was so taken by the experience that she decided to write her senior project on the mating behavior of guppies. Her adviser was the teacher of her animal behavior course, George Barlow, a renowned fish scientist.

“I was very fortunate to have him become my mentor,” says Alonzo. “I think, without that, it would have been hard for me to consider scientific research as a possible profession for me. His course would have just been a course I loved, and then I would have gone on. But he took me under his wing, brought me into his lab, introduced me to graduate students, and let me see what that life was like. He also taught me how to do scientific research at a basic level.”

“When I was a grad student, I struggled with the fact that I didn’t have someone of whom I could say, ‘There’s a woman scientist who I respect who has a family and is really enjoying what she is doing but has balance,’” recalls Alonzo. “For women, I think female mentors become more important at that stage — just to be able to look around and see someone you can identify with is important, whether or not you need academic advice from them.”

The Yale faculty member says that she had the advantage of growing up with a father who is in academia, but says if it were not for her “amazing” mentor, Marc Mangel, while she was a postdoctoral fellow at the University of California-Santa Cruz, she would have left the academic track. Mangel also helped give her the confidence to apply for a teaching position at Yale. She still keeps in touch with some of her own early-career mentors.

A member of the Yale faculty since 2004, Alonzo was awarded a National Science Foundation Early Career Award last year, among other honors. She spends several weeks each year doing fieldwork in Corsica on the co-evolutionary dynamics of male and female traits among the ocellated wrasse, and also conducts field research in Connecticut on a freshwater stream fish called the tessellated darter. She uses mathematical models to examine how interactions within and between the sexes affect the evolution and expression of reproductive behaviors. Her research has implications for the management of fisheries and for conservation.

“If you don’t know how an animal survives and reproduces, you can’t manage to save it if it is threatened,” Alonzo notes.

Alonzo — whose husband, James, heads the education program at the Yale Peabody Museum of Natural History — says she had to change her research routine after having her two children, 10-year-old Noah and 8-year-old Sophia.

“Before I had children, I would go to Corsica for two or three months at a time,” says the Yale scientist. “Today, it’s a balancing act, as any work is, but I can’t imagine it any other way.”

Alonzo says most of her mentoring is done while just interacting with her students or postdocs in ordinary campus settings.

“With postdocs, for example, we are co-workers, so there is a professional interaction that takes place,” she says. “But I think that camaraderie and social interaction is also important. A lot of little conversations come up while we are sitting at lunch or having a coffee together, when they might talk to me about what job to go for, or what to include on their curriculum vitae. I might talk to them about a meeting that would allow them to interact with others who share their interests or help them review a paper for the first time.

“There are so many parts of having a job as an academic or a scientist that are never taught in class,” she adds. “So I try to make sure they have opportunities to do the different parts of an academic job or a job as a scientist, knowing that it’s the start of their own training to be mentors themselves.”

Alonzo has also been a freshman adviser in Davenport College and is an adviser for undergraduates majoring in ecology and evolutionary biology. Since 2006, she has been a faculty mentor in the Women Mentoring Women Program at Yale, and she is a member of the Yale Women Faculty Forum. Her mentoring, she says, has ultimately helped her work because it leads her to expand her own strategies for research and teaching.

“I’m a believer in the adage that you don’t really understand something until you teach it,” explains Alonzo.

She is particularly interested in encouraging women at the point where they may question whether to stay in science. She confronted such a decision when she was starting a family, and credits Mangel with encouraging her to continue her scientific work.

“One reason why mentorship is so important to me is that I know for myself how someone who is telling you to go on, or to apply for some award — or just being positive at a time when you aren’t sure whether you can succeed in the field — really makes a difference,” Alonzo says. “It’s very easy for a student to say ‘I don’t have this skill’ or ‘I’m not brilliant.’ When my students have doubts, I tell them ‘I’m confident you can do it.’ You can’t do it for them, but you can support them as they struggle to succeed.

“That’s what keeps people going,” she adds. “You’re always going to get negative feedback or submit a paper that gets rejected or have a project turn out in way you didn’t intend. That’s when it’s so necessary to hear a voice that says ‘I think you are able.’”