Surviving and thriving under climate change in the world’s deltas

Researchers from the University of Exeter are investigating the effect of climate change on deltas in South Asia and Africa to understand how people will respond and adapt.

Deltas are economic and environmental hotspots, with many large deltas in South, South-East and East Asia and Africa. The new $13 million project examines four deltas that are home to almost 200 million people, many of whom are farmers who provide food for a large proportion of the population.

The project will work with scientists, demographers and social scientists in the Nile delta in Egypt, the Ganges-Brahmaputra in Bangladesh and India, the Mahanadi in India and the Volta in Ghana. 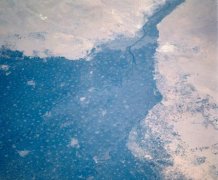 The goal of the project is to identify where and how people can thrive and build resilient lives. Image courtesy of NASA

This week the latest report by the Intergovernmental Panel on Climate Change (IPCC) highlighted that people and assets exposed to coastal risks will increase significantly in the coming decades due to population growth, economic development and the growth of cities. This study will focus on how people move within deltas and how cities will cope over the next half century.

Robert Nicholls, Professor of Coastal Engineering at the University of Southampton who is leading the project, said: “Deltas are vulnerable areas and we need to act quickly to make more informed choices about how best to live with and thrive in conditions of climate stress. We are working with the Governments and people of these regions to understand the challenges and identify with a wide range of stakeholders the implications of different adaptation options to those challenges.”

Professor Neil Adger and Dr Helen Adams from Geography are leading the project in Exeter. Professor Adger commented: “We are excited to be able to understand the options for these regions, working with fantastic scientists and social scientists. Where and how people can thrive and build resilient lives is our goal.”

Dr Adams added: “What’s so interesting about this project is that we will not only be able to understand the role of migration as an adaptation in these deltas, but compare between them and identify commonalities and opportunities for knowledge sharing.”

The interdisciplinary project is a partnership between the Universities of Southampton, Dundee, Exeter, the Met Office in Exeter and Plymouth Marine Laboratory as well as the Basque Centre for Climate Change, UN Food and Agriculture Organisation (FAO), Rome and partners in Bangladesh, India, Egypt, and Ghana.