While most Americans could be a bit more knowledgeable in the ways of science, a majority are interested in hearing about the latest scientific breakthroughs and think highly of scientists. 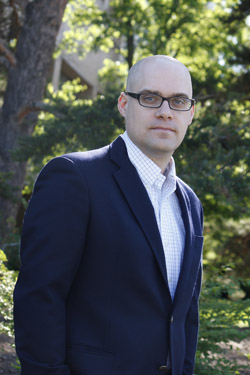 John Besley, MSU associate professor of advertising and public relations, spoke at this year’s AAAS meeting on the public’s perceptions of science and scientists. He said surveys show most Americans lack a lot of basic scientific knowledge, but hold scientists in high regard. Image credit: Michigan State University

A Michigan State University faculty member served as lead author for the chapter in the report that covers public perceptions of science. John Besley, an associate professor in MSU’s Department of Advertising and Public Relations, reviewed the data, as well as similar surveys from around the world, and highlighted key findings on Feb. 14 during the annual meeting of the American Association for the Advancement of Science.

According to the survey, more than 90 percent of Americans think scientists are “helping to solve challenging problems” and are “dedicated people who work for the good of humanity.”

“It’s important for Americans to maintain a high regard for science and scientists,” said Besley, who also is the Ellis N. Brandt Chair in Public Relations. “It can help ensure funding and help attract future scientists.”

Unfortunately, Americans still have a tough time answering some basic science questions. Out of a total of nine questions that covered the physical and biological sciences, the average score was 6.5 correct answers.

For example, only 74 percent of those queried knew that the Earth revolved around the sun, while fewer than half (48 percent) knew that human beings developed from earlier species of animals.

Some of the other highlights of the survey include: