The Nearby Supernova Factory, based at Berkeley Lab, finds a new way to measure cosmological distances with far greater accuracy

Less than 20 years ago the world learned that the universe is expanding ever faster, propelled by dark energy. The discovery was made possible by Type Ia supernovae; extraordinarily bright and remarkably similar in brightness, they serve as “standard candles” essential for probing the universe’s history.

In fact, Type Ia supernovae are far from standard. Intervening dust can redden and dim them, and the physics of their thermonuclear explosions differs — a single white dwarf (an Earth-sized star as massive as our sun) may explode after borrowing mass from a companion star, or two orbiting white dwarfs may collide and explode. These “normal” Type Ia’s can vary in brightness by as much as 40 percent. Brightness dispersion can be reduced by well-proven methods, but cosmology continues to be done with catalogues of supernovae that may differ in brightness by as much as 15 percent.

Now members of the international Nearby Supernova Factory (SNfactory), based at the U.S. Department of Energy’s Lawrence Berkeley National Laboratory (Berkeley Lab), have dramatically reduced the scatter in supernova brightnesses. Using a sample of almost 50 nearby supernovae, they identified supernova twins — pairs whose spectra are closely matched — which reduced their brightness dispersion to a mere eight percent. The distance to these supernovae can be measured about twice as accurately as before. 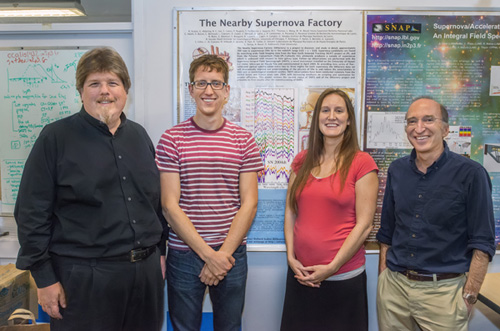 From left, Greg Aldering, Kyle Boone, Hannah Fakhouri and Saul Perlmutter of the Nearby Supernova Factory. Behind them is a poster of a supernova spectrum. Matching spectra among different supernovae can double the accuracy of distance measurements. (Photo by Roy Kaltschmidt/Berkeley Lab)

“Instead of concentrating on what’s causing the differences among supernovae, the supernova-twins approach is to look at the spectra and seek the best matches, so as to compare like with like,” says Greg Aldering, the Berkeley Lab cosmologist who leads the SNfactory. “The assumption we tested is that if two supernovae look the same, they probably are the same.”

Hannah Fakhouri, the lead author of the ApJ paper, initiated the twin study for her doctoral thesis. She says that the theoretical advantages of a twins match-up had long been discussed at Berkeley Lab; for the researchers who founded the SNfactory, including her thesis advisor, Nobel laureate Saul Perlmutter, one of the main goals was gathering a dataset of sufficient quality to test hypotheses like supernova twinning.

Fakhouri’s timing was good; she was able to take advantage of precise spectrophotometry — simultaneous measures of spectra and brightness — of numerous nearby Type Ia’s, collected using the SNfactory’s SuperNova Integral Field Spectrograph (SNIFS) on the University of Hawaii’s 2.2-meter telescope on Mauna Kea.

“Nearby” is relative; some SNfactory supernovae are more than a billion light years away. But all yield more comprehensive and detailed measurements than the really distant supernovae also needed for cosmology. The twin study used data from the first years of the SNfactory’s observations; further work will use hundreds of high-quality Type Ia spectra from the SNfactory, so far the only large database in the world that can be used for this work.

Despite the surprising results, Fakhouri describes the initial research as “a long slog,” requiring hard work and attention to detail. One challenge was making fair comparisons of time series, in which spectra are taken at frequent intervals as a supernova reaches maximum luminosity, then slowly fades; different colors (wavelengths) brighten and fade at different rates.

Because of demands on telescope time and other issues like weather, the time series of different supernovae can’t be sampled uniformly. SNfactory member Rollin Thomas, of Berkeley Lab’s Computational Cosmology Center, recommended a mathematical procedure called Gaussian Process regression to fill the gaps. Fakhouri says the outcome “was a big breakthrough.”

Cleaning up the spectra and ranking the supernovae for twinness was done completely “blind” — the researchers had no information about the supernovae except their spectra. “The unblinding process was suspenseful,” Fakhouri says. “We might have found that twinning was completely useless.” The result was a relief: the closer the twins’ spectra, the closer their brightnesses.

The result strongly suggests that the long-accepted 15-percent uncertainty in Type Ia brightness is not merely statistical; it masks real but unknown differences in the nature of the supernovae themselves. The twin method’s dramatic reduction of brightness dispersion suggests that hidden unknowns about the physical explosion processes of twins have been severely reduced as well, a strong step toward using such supernovae as true standard candles.

The best of the bunch

When Fakhouri received her doctorate, graduate student Kyle Boone, second author of the ApJ paper, took over the final steps of the analysis. “I started by comparing the twin method to other methods for reducing dispersion in brightness.”

The conventional approach has been to fit a curve through a series of data points of brightness versus time: a lightcurve. Dimmer Type Ia’s have narrower lightcurves and are redder; this fact is used to “standardize” supernovae, that is, to adjust their brightnesses to a common system.

The twin method, says Boone, “beats the lightcurve method without even trying. Plus, we found this can be done with just one spectrum — an entire lightcurve is not needed.”

Other recent methods are more subtle and detailed, but all have drawbacks compared to twinning. “The main competing technique gives excellent results but depends on wavelengths in the near infrared, where dispersion of the starting brightness is much less,” Boone says. “That will be difficult to use with distant supernovae, whose high redshift makes near-infrared wavelengths inaccessible.”

Fakhouri says, “Supernovae offer unique advantages for cosmology, but we need multiple techniques,” including statistical methods charting how dark energy has shaped the structure of the universe. “The great thing about nature is that it provides different kinds of probes that can be decoupled from one another.”

Says Boone, “We are working to see how well the twins technology can be applied to a very large sample of well-characterized, high-redshift supernovae that a space telescope like WFIRST could provide.” NASA plans to launch WFIRST, the Wide-Field Infrared Survey Telescope, in the mid-2020s. Among other investigations, it will capture the spectra of many thousands of distant Type Ia supernovae.

When based on a reference sample of well-measured supernovae large enough for every new supernova to find its perfect twin, twin-supernova technology could lead to precise measures of dark energy’s effect on the universe over the past 10 billion years. Each point in space and time so labeled will be an accurate milestone on the journey that led to the universe we live in today.

This work was supported by DOE’s Office of Science and by the National Center for Scientific Research/National Institute of Nuclear and Particle Physics (CNRS/IN2P3), the CNRS National Institute for Earth Sciences and Astronomy (CNRS/INSU), and the Laboratory of Nuclear and High-Energy Physics (LPNHE) in France; support in Germany was provided by the German Research Foundation (DFG) and in China by Tsinghua University. The researchers acknowledge the assistance of the Palomar Observatory, the High Performance Wireless Research and Education Network (HPWREN), the University of Hawaii 2.2-meter telescope, and DOE’s National Energy Research Scientific Computing Center (NERSC) for storage and computing time.