Summer Sailing in the Cloud With Office 365

*Three friends are sailing the U.S. Eastern Seaboard in search of the American spirit. They’ve chronicled their journey and stayed connected with help from Office 365, an official sponsor of the trip.*

BOSTON – July 5, 2011 – In 1987, John Mirassou and two friends set sail from Ft. Lauderdale on a 17-foot Boston Whaler. They didn’t expect to find anything more than good times on their journey, which ultimately logged some 6,100 miles. They were wrong.

“What started out as way to see the country by boat really turned into a story about the American people,” Mirassou said. “Everywhere we went we were taken in by people we had never met. This American spirit came out in amazing instances of generosity.”

Twenty four years later, Mirassou set sail from Norfolk, Va., to see if that American spirit still existed. On June 3, he and two friends climbed aboard a Boston Whaler – a 19-footer this time – and headed for Boston, where they celebrated the 4th of July. They’ve been chronicling their trip, dubbed “Only In America,” with help from Office 365, an official sponsor of the trip.

The verdict? “Without question the American spirit is still out there,” Mirassou said. Although the country is still digging out from tough economic times, the crew has found the same generosity that overwhelmed them 24 years ago. 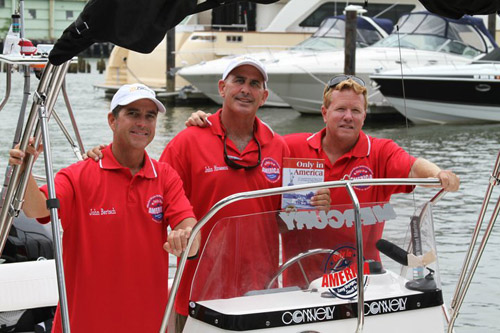 Friends John Bertsch, John Mirassou, and Marty Burke sailed from Norfolk, Va., to Boston, Mass., in search of the American spirit. They used Office 365 to chronicle and broadcast their journey. Image credit: Microsoft

What has changed since 1987 is the technology. “We used to hop out at night and hope that the pay phone was working,” Mirassou said. “Now, we do a Web interview in front of Mount Vernon sitting on the bow of the boat. It blows me away.”

Before the crew left Norfolk on the “Spirit 7,” the U.S. Office 365 Business and Marketing team equipped the crew with Office 365, Windows Phone and Wi-Fi, with help from Microsoft Cloud Champion partner Cloud Strategies, which installed and deployed Office 365 for the crew.

At appreciation events in Washington, D.C., and Philadelphia, Pa., the sailors have joined the U.S. Office 365 team to talk about their journey with customers and partners. They also attended the Office 365 U.S. launch event on Tuesday, June 28, at Chelsea Piers in New York City. The crew spoke about how they’re using the service, and performed a Lync demo from the Statue of Liberty.

Onboard, the Spirit 7’s crew uses Microsoft technology to connect and communicate anytime, anywhere, even while they’re out at sea. The far-flung friends also used Microsoft Lync and Microsoft Exchange to help plan the trip.

The crew uses Exchange Online to send updates of their journey to fans and loved ones; Lync Online to send instant messages and hold PC-to-PC audio/video calls; SharePoint Online to collaborate as they travel, creating journal entries and uploading media and related documents; and Windows Phones to capture and share stories via email and documents while uploading content from their various ports of call to their SharePoint Online site.

Penny Delgadillo, senior product manager, U.S. BMO Office 365 team, said that Microsoft was proud to sponsor the Only In America journey and called the partnership a natural one. “John and his crew are trying to find out if America can be a comeback story having gone through some tough economic times over the last three years,” she said. “It really ties into what we’re trying to do with small businesses by having an offering like Office 365, a technology that had used to be reserved for enterprise companies but can now scale down to the small business.”

The current trip was inspired by the response to Mirassou’s book “Only In America: An American Boating Adventure,” which chronicled the 1987 adventure from Ft. Lauderdale to New York to Chicago to New Orleans. People wrote Mirassou and asked if he thought the America he described still existed.

He did, and he’s been finding it on the trip so far. Like last time, the crew has received random acts of kindness: strangers have taken them out for breakfast, put them up in their homes, and let them dock for free. At a dock in Maryland, a retired Marine approached the crew and told them their slip fees were taken care of. He then gave them a World War II-era challenge coin, which soldiers had to show if their nationality was challenged on the battlefield.

“When the book came up, one reviewer commented that the best writers in Hollywood couldn’t make this stuff up,” Mirassou said. “That’s true, and we’re seeing the same today.”

The Only In America journey concluded in Boston on July 4, when boat and crew escorted the USS Constitution as she maneuvered through Boston Harbor and gave her annual U.S. Independence Day 21 Gun Salute.

Boston Whaler (the type of boat used on the journey) enthusiasts can be found all over the world. Ben VanHeusden, a Michigan-based Microsoft technical account manager, owns four of the motorboats. When he heard about the trip, he knew he had to get involved. So he wrote Delgadillo, who put him in touch with Mirassou, who invited him to join the crew as it set sail from Norfolk.

He had the time of his life, and was amazed at how the crew was using technology.

“I think it just shows you the traditional having to go to work every day in office and fire up your PC is becoming obsolete,” VanHeusden said. “Here’s a group of people who could do their day job if they wanted to sitting in a boat. They have access to everything we have in our own office – Office, SharePoint, Windows Phone. There’s nothing out there they don’t have. Well, maybe a printer, but I’m sure we could have fixed that up too if they needed one.”