In an effort to determine if conditions were ever right on Mars to sustain life, a team of scientists, including a Michigan State University professor, has examined a meteorite that formed on the red planet more than a billion years ago.

And although this team’s work is not specifically solving the mystery, it is laying the groundwork for future researchers to answer this age-old question.

The problem, said MSU geological sciences professor Michael Velbel, is that most meteorites that originated on Mars arrived on Earth so long ago that now they have characteristics that tell of their life on Earth, obscuring any clues it might offer about their time on Mars.

“If we could somehow prove the signature on the meteorite was from before it came to Earth, that would be telling us about Mars.” 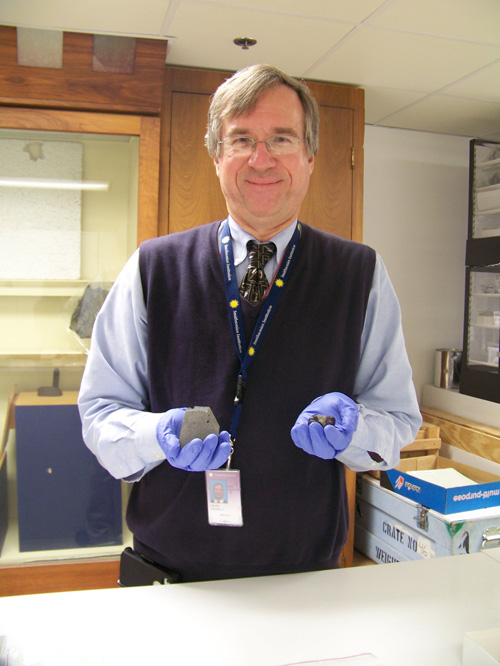 Geological Sciences professor Michael Velbel was part of a team that examined a meteorite that originated on Mars, looking for clues that life may have once existed on the red planet. Here, Velbel poses at the Smithsonian Institution’s National Museum of Natural History where he is currently serving as a senior fellow. Photo by Cari Corrigan.

Specifically, the team found mineral and chemical signatures on the rocks that indicated terrestrial weathering – changes that took place on Earth. The identification of these types of changes will provide valuable clues as scientists continue to examine the meteorites.

The meteorite that Velbel and his colleagues examined – known as a nakhlite meteorite – was recovered in 2003 in the Miller Range of Antarctica. About the size of a tennis ball and weighing in at one-and-a-half pounds, the meteorite was one of hundreds recovered from that area. 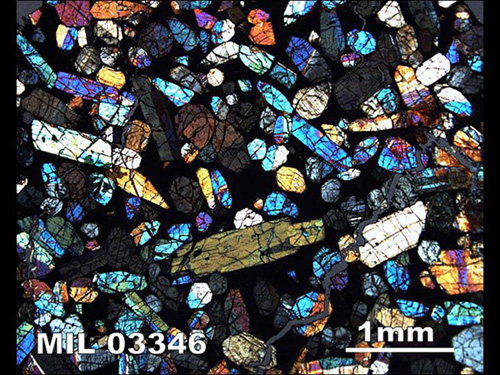 A microscopic image of a slice of a meteorite. The various colors indicate the sizes, shapes and orientations of minerals in the rock. Image courtesy of NASA.

Velbel said past examinations of meteorites that originated on Mars, as well as satellite and Rover data, prove water once existed on Mars, which is the fourth planet from the sun and Earth’s nearest Solar System neighbor.

“However,” he said, “until a Mars mission successfully returns samples from Mars, mineralogical studies of geochemical processes on Mars will continue to depend heavily on data from meteorites.”

Velbel is currently serving as a senior fellow at the Smithsonian Institution’s National Museum of Natural History in Washington D.C. 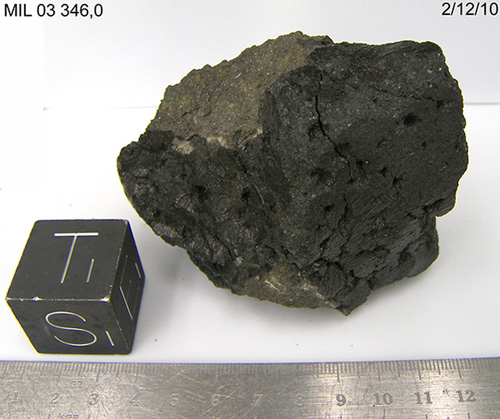 MSU researcher Michael Velbel was part of a team that examined a meteorite similar to this one, looking for clues that life may have once existed on Mars. Photo courtesy of NASA.

The research is published in Geochimica et Cosmochimica Acta, a bi-weekly journal co-sponsored by two professional societies, the Geochemical Society and the Meteoritical Society.