Some sharks are ‘gregarious’ and have strong social connections, whilst others are more solitary and prefer to remain inconspicuous, according to a new study which is the first to show that the notorious predators have personality traits.

Personalities are known to exist in many animals, but are usually defined by individual characteristics such as how exploratory, bold or aggressive an individual is. 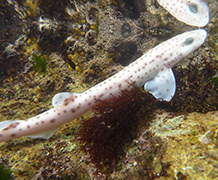 This is the first time that individual sharks have been shown to possess social personalities. Image credit David Sims.

Research led by the University of Exeter and the Marine Biological Association of the UK (MBA) has shown for the first time that individual sharks actually possess social personalities, which determine how they might interact with group mates in the wild.

In a study published in the journal Behavioral Ecology and Sociobiology, the team tested for social personality by recording the social interactions of groups of juvenile small spotted catsharks in captivity under three different habitat types.

The species of shark (Scyliorhinus canicula), found throughout the northeast Atlantic and Mediterranean,  group together by resting around and on top of one another, sat on the bottom of the seafloor.

Working at the MBA in Plymouth, Devon, ten groups of sharks were monitored in large tanks containing three habitats which differed in their level of structural complexity.

Dr David Jacoby, a behavioural ecologist now at the Institute of Zoology, London said: “We found that even though the sizes of the groups forming changed, socially well-connected individuals remained well-connected under each new habitat. In other words, their social network positions were repeated through time and across different habitats.

“These results were driven by different social preferences (i.e social/antisocial individuals) that appeared to reflect different strategies for staying safe. Well-connected individuals formed conspicuous groups, while less social individuals tended to camouflage alone, matching their skin colour with the colour of the gravel substrate in the bottom of the tank.”

Professor Darren Croft, of the Centre for Research into Animal Behaviour in Psychology at the University of Exeter, added: “We define personality as a repeatable behaviour across time and contexts. What is interesting is that these behaviours differ consistently among individuals. This study shows, for the first time, that individual sharks possess social personalities.”

He added: “In the wild these small juveniles can make easy prey items for larger fish, so different anti-predator strategies are likely to have evolved. More research, however, is required to truly test the influence of predators on social personality traits in sharks. This study is the first step in that direction.”

The work was funded by the Fisheries Society of the British Isles.